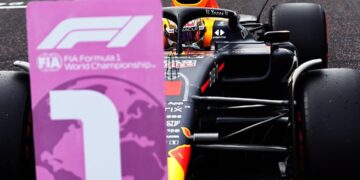 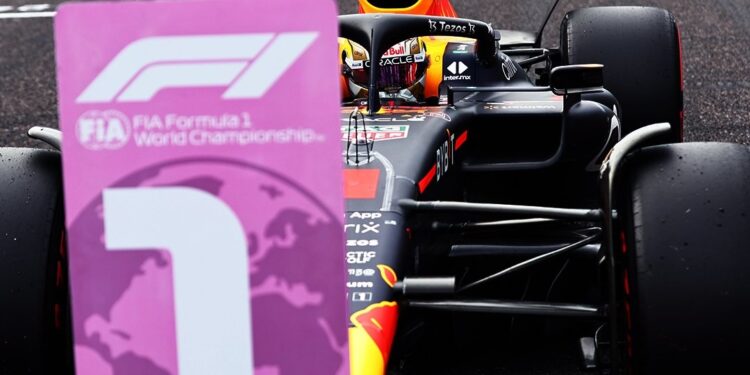 The rain began to come down just over an hour before the race start, unlike in Singapore though, the rain was steady but not overly heavy so the race would be getting underway as planned with all cars on intermediate tyres.

Max Verstappen and Charles Leclerc will be starting from the front row with their teammates Carlos Sainz and Sergio Perez behind them. After having his rear wing, front wing ballast and suspension set up changed earlier today, Pierre Gasly will now be required to start from the pit lane instead of P17.

The formation lap showed just how much water there was on the track with a lot of spray being thrown up behind each car which means that visibility could be very difficult for all but Verstappen.

As the lights went out, while Leclerc got the better start getting ahead on the run to the first corner, Verstappen held his nerve around the outside and retook the position through T1. It wasn’t the greatest of starts for Sebastian Vettel, the Aston Martin driver having contact with Fernando Alonso and going into the gravel from P9 but he did manage to get back going.

The Safety Car was called before the end of lap 1 when Sainz aquaplaned into the wall. The Spaniard wasn’t the only car to fail to see the first lap out as Alex Albon’s Williams had a failure and he also stopped on track. Gasly was also seen driving around with a huge piece of hoarding on the front of his car, the AlphaTauri driver didn’t have an off himself but it seems the board bounced around as a result of Sainz’ crash and suddenly appeared on Gasly’s car shocking the French driver.

After a lap behind the Safety Car the Red Flag was thrown as the rain had started to intensify. Gasly was head and shown to be very angry on the way to the pits, in his garage and marching down the pit lane but footage was then seen on social media of the AlphaTauri driver having a close call with a tractor on the circuit. A recovery vehicle on track is bad enough in the dry but with rain making grip and visibility much more difficult, his reaction was very justifiable and echoed by those on the grid and online, with Alex Wurz, chairman of the GPDA posting “I think we need to discuss a tractor on track….. we can keep it short: this must NOT happen guys”

I think we need to discuss a tractor on track….. we can keep it short: this must NOT happen guys 🔴

Just over 40 minutes after the Red Flag was flown the drivers were back in the cars and ready to get back on track for a rolling restart when Race Control changed their mind and suspended the restart as they saw heavier rain on the way.

The FIA then made a statement on the Gasly/tractor incident saying: “In relation to the recovery of the incident on Lap 3, the Safety Car had been deployed and the race neutralised. Car 10, which had collected damage and pitted behind the Safety Car, was then driving at high speed to catch up to the field.

“As conditions were deteriorating, the Red Flag was shown before Car 10 passed the location of the incident where it had been damaged the previous lap.”

The race however had only just been Red Flagged moments before Gasly came across the recovery vehicle and there was footage online and shown on tv of the Safety Car and the whole grid also passing the tractor. The stewards then announced they would be investigating the lap 2 T12 incident with Gasly after the race…for speeding under Red Flag conditions.

An hour and 25 minutes after the first attempt at a restart was meant to happen, and over two hours since the Red Flag, the drivers returned to their cockpits with mandatory full wet tyres on their cars and headed out of the pits behind the Safety Car. With there only being a three hour window available for the race to be run in after it starts, the Grand Prix now had a countdown timer to the end instead of a lap counter.

The cars followed the Safety Car around for a few laps, with most drivers reporting back on the first lap that track conditions weren’t too bad and visibility was better than earlier. However, after that they started changing their minds with Valtteri Bottas in the middle of the pack disagreeing about visibility while Lewis Hamilton, who had initially said it was nearly intermediate tyre territory changing his mind and deciding that the wets were still needed.

The race got back underway with a rolling restart while there was just less than 40 minutes on the clock. Sebastian Vettel and Nicholas Latifi took to the pits at the restart to swap to the inters though the Aston Martin team will be looked at for releasing their driver into the Canadian’s path.

On track in full speed, the spray was very heavy but despite that after seeing the inters giving good times, the majority of the pack headed to the pits to also ditch the extreme tyres. Fernando Alonso, Daniel Ricciardo and Mick Schumacher all remained on track which saw them take over the top three spots while Zhou Guanyu also stuck with the wets and was P5, behind Verstappen.

While the Alpine and McLaren drivers took to the pits a couple of laps later, Schumacher led the race for all of a few seconds as Verstappen overtook him as Haas decided to stick it out in the hopes of a Safety Car. The young German lost more positions over the following laps as the Haas driver’s tyres were only able to set times almost ten seconds slower than Verstappen.

With thirty minutes on the clock Leclerc was just over four seconds behind Verstappen while Schumacher was the only driver not on intermediates and was in P6. He fell out of the top ten in the next few minutes as the Haas gamble didn’t pay off and they had to pit, rejoining last with a fifteen second gap to the car ahead of him.

The early inter adopters, Vettel and Latifi were at that stage in P6 and P8 respectively, their roll of the dice turning out to be the much more advantageous one.

The tyres started degrading after a few laps with the lap times dropping off by a few seconds but Verstappen had a solid lead, pulling over ten seconds on Leclerc while his gap to Perez was decreasing. The closest on track battle with less than twenty minutes to go was the fight for P4 with Hamilton right behind Esteban Ocon but the straight line speed of the Alpine and the spray made things difficult for the Mercedes.

While Hamilton was having difficulty overtaking, George Russell was having an easier time of it, the other Mercedes driver had had to stack in the pits for the swap to inters which saw him emerge in P11 but with ten minutes to go he had made it up to P8.

With just over eight minutes to go, Alonso pitted from P7, rejoining on fresh tyres in P10 between the McLarens. The Spaniard was making up places and was into P8 with five and a half minutes to go, while at the front Perez was right behind Leclerc and looking to make it a Red Bull 1-2.

In the final laps Alonso made it past Russell to retake the P7 he gave up on his final stop and then so nearly almost took P6 off of Vettel with the two taking the chequered flag with only 0.011 seconds between them.

At the final corner Leclerc went wide and as the post-race interviews were taking place in the pitlane, the stewards handed the Monegasque  a five second penalty which dropped him back into P3.

After that it was then announced the Verstappen had won the championship which caused a lot of confusion, Verstappen himself amongst those questioning the announcement, as with just over 50% of the race distance being completed, everyone was expecting  that full points wouldn’t be awarded.

What seems to be the case is that the  regulation for lower points being awarded states that “If a race is suspended in accordance with Article 57, and cannot be resumed…” so it seems that as the race did resume following the Red Flag period, that then full points would be handed out. However, as has been pointed out online, there doesn’t seem to be a minimum number of resumed laps required before full points would be due so that regulation is still quite vague.

Nevertheless, Verstappen took both the race and championship home in Japan, Perez took P2 with Leclerc P3. Behind them Ocon held off Hamilton’s best efforts and took P4 for Alpine, while Vettel and Alonso took P6 and P7 respectively in their near photo-finish.

P6 is a fantastic result for Vettel who was facing the wrong way before T1 on the opening lap. Russell took P8 for Mercedes while it was also a brilliant day for Latifi who took his first points of the season in P9, equalling the best results of both Albon and Nyck de Vries. The final top ten spot went to Lando Norris, who finished just ahead of his teammate Ricciardo.