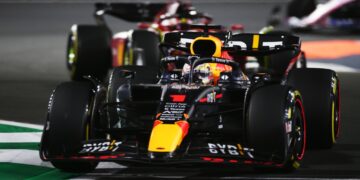 Saudi Arabian Grand Prix – Max Verstappen took the chequered flag ahead of Charles Leclerc after an action-packed end to the race in Jeddah.

The Saudi Arabian Grand Prix drama started well before the lights went out on the Jeddah Corniche Circuit as there was some frantic work being done in the Ferrari garage as the mechanics had to replace the wiring loom on Carlos Sainz’ car.

Just as that issue was being fixed, Yuki Tsunoda stopped on track as he was making his way to the grid, the Japanese driver reporting “lost engine, lost engine” before AlphaTauri told him to jump out as “that’s the end”. That left only eighteen drivers to line up on the grid as Mick Schumacher had been ruled out of contention yesterday following his heavy crash during qualifying.

After putting in a stunning qualifying lap to beat the Ferraris yesterday, Sergio Perez lined up in pole position for the first time in his Formula 1 career, eleven years to the day since his debut at the Australian Grand Prix in 2011.

With free tyre choice for all the drivers, there were only three who chose the hard compound – Kevin Magnussen P10, Lewis Hamilton P15 and Nico Hulkenberg P17 – while the rest started on the mediums.

For such a tight and twisty circuit, it was an incredibly clean start to the race without any flags being required in the opening few laps. It was an ideal start for Perez, the Mexican holding his lead and pulling out just over a second gap over second placed Charles Leclerc. Max Verstappen was disappointed with P4 in qualifying but wasn’t there for very long in the race, taking P3 from Sainz in the first couple of corners.

As it was in his debut race last week, Zhou Guanyu struggled on the opening lap, his Alfa Romeo going into anti-stall at the first corner and dropping him to the back as a result. The big battle of the opening laps was between Alpine teammates Fernando Alonso and Esteban Ocon.

Alonso initially trying to go down the inside of his teammate on the straight, but the Frenchman made a late move and closed the door. A couple of laps later, the double world champion made it work around the outside. The two continued squabbling over the following laps, Ocon twice having to cut the first corner after outbreaking himself in his attempts to pass Alonso.

On lap 13, Alpine had had enough and told Ocon to hold position behind Alonso. At that stage the battling between the two had dropped them well back from fifth placed George Russell and allowed Valtteri Bottas and Kevin Magnussen to catch right up to them. Bottas then managed to pass the Frenchman as he told his team their team orders were “badly managed”.

Back at the front and on lap 16 Ferrari messaged Leclerc “box to overtake” the Monegasque didn’t end up heading to the pitlane that lap but the car in front of him, Perez did. Just as he returned to the track, Nicholas Latifi’s race ended with his Williams in the wall leading to a brief Virtual Safety Car and then Safety Car. That allowed Leclerc, Verstappen and Sainz to pit and lose less time than a pit stop under green flag would.

Leclerc and Verstappen rejoined in P1 and P2, while there was controversy about P3. Under Safety Car conditions, Sainz emerged from the pitlane side-by-side with Perez, the Red Bull getting ahead but Sainz was quick to inform his team that he had been ahead at the Safety Car line so Perez should have to give the place back.

The incident was noted by the stewards but before they could make a ruling, Red Bull themselves decided to allow the Ferrari past when the race resumed after five laps behind the Safety Car.

Post Safety Car, the first battle of note was the fight for P6 between the Haas of Magnussen and the Mercedes of Hamilton, a combination that would have been unthinkable last season given the difference in the teams’ performances. The two, who were still on the hard tyres that they’d started the race with, swapped positions a couple of times but it was the seven-time world champion who came out ahead in the end.

As the sole rookie this season, Zhou’s race continued in as good a fashion as it had started. The Alfa Romeo driver had been given a 5 second time penalty for leaving the track and gaining an advantage. The penalty had seemed to have been served at the Chinese driver’s pit stop but apparently wasn’t served correctly and Zhou was then given a drive-through penalty.

With less than twenty laps to go, Verstappen was told to “keep it sensible in the high speed for now, we can put pressure on later in the race. Let Leclerc use up his tyres at the moment”. Verstappen keeping the gap around 1.5 seconds while he and Leclerc both put in quick laps with.

Lap 37 and everything started happening. First Alonso started slowing with engine problems, then Bottas had technical issues and retired to his garage, and then Daniel Ricciardo radioed in that he had lost drive and stopped just at the start of the pit entry lane.

The Virtual Safety Car was brought out and Mercedes saw that as their chance to make their only pit stop of the race, unfortunately for them the pit lane was closed so Ricciardo and then Alonso’s cars, the Alpine had managed to creep around the track but died a few metres further down the pit entry than the McLaren.

The pit lane was only opened as the Virtual Safety Car was withdrawn, so Hamilton didn’t gain any time advantage and emerged out of the points in P12. At the front though, Verstappen had closed the gap and the fight for the lead was back in full flow. Verstappen did make the move and got into P1, but a couple of corners later Leclerc made used of the DRS and retook the place.

The following laps were full of action with both locking up at one point trying to make the other cross the DRS detection line first so that they, the car behind, could have the advantage. There was a bit of a breather then as the Red Bull dropped back but the reigning champion didn’t leave Leclerc alone for long. Three laps from the end and Verstappen made it into the lead again with a pass on the start-finish straight.

Lance Stroll and Alex Albon played a part in the fight as they had a coming together which brought out yellow flags and prevented Leclerc from making a move on the penultimate lap. They the continued their battle right through to the chequered flag with Leclerc right on the Red Bull’s rear wing for a very close, exciting end to the Grand Prix.

Sainz brought his Ferrari home in quite a quiet P3, a couple of seconds ahead of Perez, the initial leader of the race, while Russell took a solid P5 for Mercedes.

The fight for P1 wasn’t the only nail-biting end to the race as Ocon, as he did in the early stages of the race, was battling for P6 though this time it was with McLaren’s Lando Norris. Unlike the earlier fight with his teammate, and in a redemption move after losing P3 to Bottas in the final metres at this race last season, Ocon held the place ending just 0.107 seconds ahead of the McLaren.

Pierre Gasly was P8 in the only AlphaTauri to take the start, while the other sole team entrant, Haas’ Magnussen, was P9 and Hamilton managed to just make it into the points in P10.

The stewards are however investigating Magnussen for potentially failing to slow sufficiently under the late yellow flags, while Sainz and Perez were noted for the same infraction. There is also an investigation into the double yellow flags in the final two laps.

First P1 of the season for car #1 👏#SaudiArabianGP @Max33Verstappen pic.twitter.com/s5NI4D2Rbc