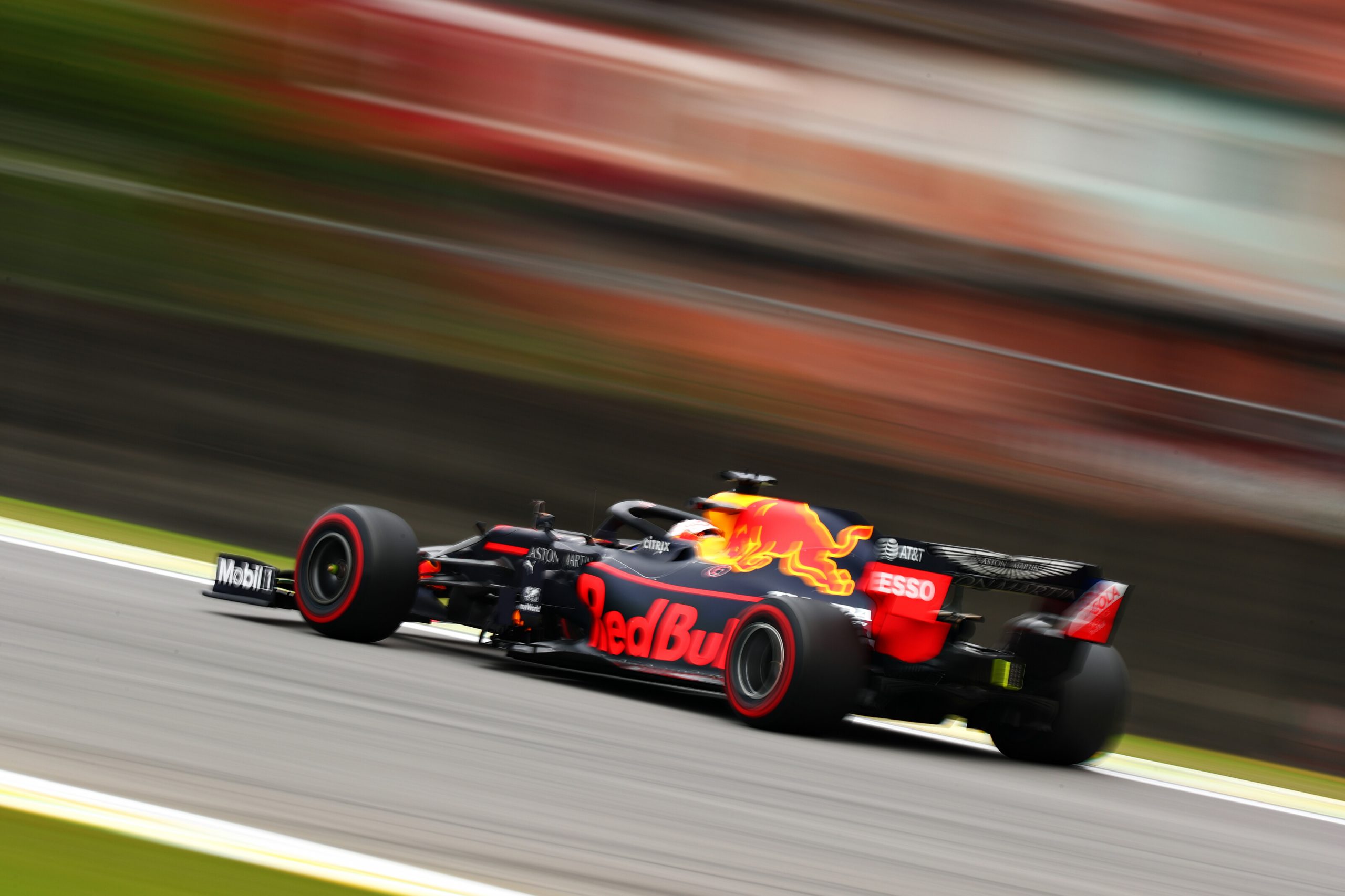 Verstappen wins ahead of Gasly and Sainz in Brazil

Verstappen wins ahead of Gasly and Sainz in Brazil

Brazilian Grand Prix – Max Verstappen has won the race at Interlagos, with Pierre Gasly claiming P2 for Toro Rosso after a chaotic final quarter of the race.

Click here for the complete results from the 2019 Brazilian Grand Prix.

Update: Lewis Hamilton, who finished P3 on track, was given a five second time penalty after the race. He has been shuffled to P7 as a result, with McLaren’s Carlos Sainz promoted to P7.

Max Verstappen has claimed victory in Brazil, coming home at the lead after a convincingly strong drive throughout. It was a race of chaos in the final quarter, with several incidents and Safety Cars causing the order to become pretty unpredictable in the closing stages.

Throughout the slow-burning strategy opening half of the race, Verstappen had led the opening stint but was jumped by Lewis Hamilton as a result of the undercut at the first stops. Verstappen immediately regrouped and pounced on Hamilton again, snatching back the lead through the opening two corners and seize back the initiative.

The race turned wild on Lap 53, when Valtteri Bottas’ Mercedes power unit let go. Pulling over and stopping at Turn 3, the Safety Car was deployed to cover the recovery of his car. Verstappen, just a second clear of Hamilton at this point, dived into the pits for a fresh set of Softs. Hamilton opted to stay out on track and take the advantage of track position, with Verstappen slotting back in behind on his fresh rubber. Ferrari’s Sebastian Vettel didn’t either, while Charles Leclerc was next up as he ditched his Hard tyres to switch to the Softs. Alex Albon and Pierre Gasly didn’t pit, having taken on Softs at their final stops, meaning they were in the mix as the race resumed after the Safety Car.

Verstappen decisively sliced past Hamilton through Turns 1 and 2 to reclaim the lead, while Albon squeezed past Vettel to move up to P3 behind Hamilton. Charles Leclerc then put his teammate under pressure and got past, only for the Ferraris to touch going down the back straight – both were eliminated on the spot with punctures from their clash.

The moment the race turned on its head 🤯#BrazilGP 🇧🇷 #F1 pic.twitter.com/Y77NrJMJ0g

Another Safety Car ensued, with just five laps remaining. Hamilton dived into the pits for Softs, and came out right behind Albon – with Red Bull now enjoying a 1-2. On the restart, Hamilton tried to dive past Albon but the pair collided. Albon plummeted down the order as the midfield came past, while Hamilton got going again in P3 – now behind Pierre Gasly.

Verstappen led home the pack, six seconds clear of anyone, while Gasly won a straight drag race against Hamilton up the hill and across the line to take his first podium by claiming P2 by just 0.062 over the Mercedes. Hamilton finished P3 but is under investigation for the Albon clash.

Carlos Sainz finished P4 for McLaren, having run the Mediums for 42 laps and making his way through the carnage as others encountered incidents in front of him. He was just half a second clear of Alfa’s Kimi Raikkonen, with Alfa enjoying a double points finish as Antonio Giovinazzi was right behind his teammate in P6.

Daniel Ricciardo finished P7 for Renault, despite picking up damage early in the race when he clashed with Haas’ Kevin Magnussen. Lando Norris claimed P8 for McLaren while Sergio Perez finished P9 for Racing Point. Daniil Kvyat made it a double points finish for Toro Rosso by taking P10.

Along with the two Ferraris and Bottas, the only other retirement was Racing Point’s Lance Stroll.