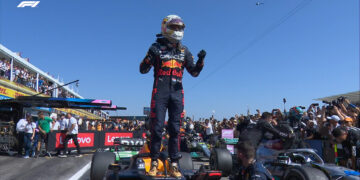 Verstappen wins as Leclerc crashes out from the lead

Verstappen wins as Leclerc crashes out from the lead 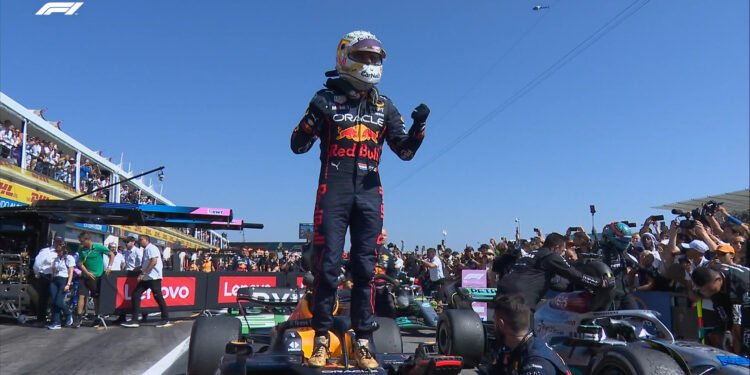 French Grand Prix – Max Verstappen had a very easy win after Charles Leclerc crashed put of the lead less than twenty laps into the race.


Heading into the French Grand Prix Charles Leclerc will be starting on pole, his seventh of the year, after being assisted by a perfectly performed tow from his teammate Carlos Sainz during qualifying yesterday. Leclerc will share the front row with Max Verstappen for the sixth time this season while power unit part changes mean Sainz will start on the back row alongside Haas’ Kevin Magnussen who also changed his power unit components.

Today’s race is quite a big one for the driver in P4 as it will be Lewis Hamilton’s 300th Grand Prix start. When the lights go out he will become the sixth member of an exclusive group of drivers which include Jenson Button, Michael Schumacher, Rubens Barrichello, Fernando Alonso and Kimi Raikkonen. Raikkonen currently holds the record with 350 starts but Alonso is on course to overtake him in the next couple of months.

It was a good start for Leclerc, who held his lead from Verstappen, while Hamilton got the better of Sergio Perez to snatch the final podium spot from the Red Bull driver. There was an opening lap incident between Yuki Tsunoda and Esteban Ocon which ended with the AlphaTauri driver spinning and falling to the back of the grid after being hit by the Frenchman. Ocon was handed a 5 second time penalty for the collision.

The medium tyres were the choice tyre with all but Valtteri Bottas P11, Pierre Gasly P14 and Sainz P19 who started on the hards. That compound wasn’t the best at the start with the Ferrari driver the only one of the three who didn’t lose places over the first few laps however even he hadn’t made as much progress as Magnussen did from P20 on the mediums.

Six laps in and Verstappen had pulled right up on Leclerc and had a look but wasn’t able to displace the Monegasque at that point. The two however had pulled a big gap to the rest of the pack having dropped Hamilton by six seconds. The reigning champion continued to stay close and be ready to pounce if there was even a sniff of an opportunity over the following laps.

The first driver to head to the pits was Magnussen, he ducked in for a swap to the hards at the end of lap 8 and that saw him drop from P12 back to his starting position of P20 but it also got him out of traffic and into some clear air.

Lap 13 saw Sainz make it into the points after he made it past the two Aston Martins, while at the front Verstappen had fallen back out of DRS range. The first of the front runners to take to the pits was Verstappen who switched to the hards on lap 17 and emerged in P7 just behind Lando Norris, though it didn’t take the Dutchman too long to clear the McLaren.

Lap 18 and the race got a big shake up after Leclerc went into the barriers at T11. The rear of the Ferrari just stepped out through the corner and he went spinning around and went nose first into the wall. On the radio Leclerc reported that he couldn’t come off throttle and was heard breathing heavily as he tried to engage reverse before giving a frustrated scream when he realised that that was the end of his race.

That crash brought the Safety Car out and caused a rush in the pitlane. Things didn’t go well for the other Ferrari either though as a slow pitstop led to an unsafe release with Alex Albon having to step on his brakes to avoid a collision. Sainz was later given a 5 second penalty for that.

Having just pitted, Verstappen remained on track and he ended up back in the lead with Hamilton and Perez behind, and the three remained in that formation when the race resumed on lap 20.

Just after the restart there was a coming together between Zhou Guanyu and Schumacher as the Alfa Romeo rookie got a bit out of shape as the Haas driver was passing him, Schumacher ended up spinning but was able to resume while the Chinese racer had to pit for a new front wing and was also given a 5 second penalty.

With Verstappen having pulled a good gap over Hamilton things were quite static with regards to the podium places but just behind them Sainz had been closing in on Russell before getting the better of the Mercedes driver on lap 30 to take P4. However the Spaniard did still have a pit stop and his 5 second penalty to deal with before the end of the race.

There was another brief yellow flag on lap 38 when Nicholas Latifi and Magnussen had a coming together which spun the Williams around and the Haas driver had to head to the pits and retire due to damage.

Lap 41 and there was great debate over Sainz’ radio about what the strategy should be. The team eventually told the Spaniard to stay out and as he was fighting with Perez for P3 the team changed their mind and came back on the radio to tell their driver that he should head to the pits. Sainz was understandably unimpressed with the timing of that message.

After the Ferrari made it to P3 there was a battle between Perez and Russell which saw the two go side by side with the Mercedes crowding the Red Bull off the track leading to Perez cutting the corner to avoid a collision and stay ahead in what would turn out to be P3 as Sainz then did indeed go to the pits. The Ferrari rejoined well back in P9.

With three laps to go Sainz had made it to P5 but was over 20 seconds behind Russell so, despite putting in the fastest laps of the day, there wouldn’t be enough laps for the Ferrari to close up before the race ended. The Virtual Safety Car came out for a couple of minutes when Zhou pulled his Alfa Romeo off track and parked by a barrier and as it ended, Russell caught Perez off guard to slip past and take P3 for what would be Mercedes’ first double podium of the year.

Perez was on the Brit’s rear wing for the remaining laps but wasn’t able to take the position back. Sainz took the chequered flag in P5,  just over 11 seconds behind the Red Bull while the Alpines and McLarens alternated the next four places with Alonso in P6 ahead of Norris, Ocon and Ricciardo, while the final point went to Stroll who just held his teammate back at the end.