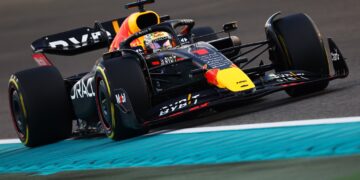 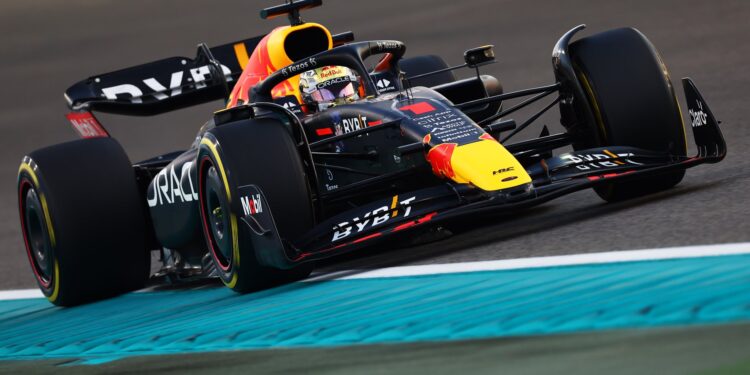 The final race of the season and although there are no championship titles still to be decided, final standings in the Teams’ Championship are still up for grabs while Sergio Perez and Charles Leclerc will be battling over P2 in the Drivers’ Standings and as the two head into the race on equal points it will be whoever finishes higher that takes the position.

With Sebastian Vettel bowing out of the sport after today there have been many tributes and celebrations of the man and his achievements over the years. Aside from all the media tributes, Lewis Hamilton organised a celebratory dinner with all the drivers earlier in the weekend, Vettel himself invited all personnel and media to go for a run around the track with him on Saturday night and it was very well attended.

This is not a track invasion. It's a Sebastian Vettel takeover.

Tonight, with our friends and colleagues from up and down the #F1 paddock, we #RunWithSeb.

Tomorrow, for the final time, we race with a legend adored throughout the sport.

The German was also honoured by his previous teams with Red Bull and Ferrari coming together with him and presenting signed car pieces to him, while Formula 1 themselves will have a big Danke Seb banner on the grid before the race while they have also included him in the post-race procedure along with the top three, if he doesn’t finish on the podium, so he will be able to perform celebratory doughnuts and park up on the grid at the end.

Vettel isn’t the only multiple championship winner to be retiring, Ross Brawn F1’s Managing Director of Motorsports, who was with Michael Schumacher through all his time at Benetton and Ferrari before taking over Honda in 2009 to create Brawn GP where he won both titles that year with Jenson Button.

There are three other drivers in the field who will be taking part in their last Grand Prix for the moment but all will be looking for opportunities to get back on the grid in future, these are Daniel Ricciardo, who is expected to become Red Bull’s reserve and promotional driver, Mick Schumacher, who seems to be in like for a potential reserve role with Mercedes, and Williams’ Nicholas Latifi.

Max Verstappen will be starting from pole with Perez beside him on the front row while the tw-by-two order continues with Ferrari on row two and the Mercedes behind. Seventeen of the twenty cars will start on the medium tyres aside from Kevin Magnussen P16 and Valtteri Bottas P18 on the hards while Pierre Gasly between those two will be on the softs.

There was no change in the top three at the start, Perez tried to make a move on his teammate but couldn’t make it and then had to defend against Charles Leclerc behind. There were differing fortunes for the two Mercedes cars, Hamilton managing to move past Carlos Sainz for P4 however he did go off the track to do so, similar to how he did with Verstappen last year, while George Russell lost out to Lando Norris.

The stewards investigated whether Sainz pushed Hamilton off track but that ended with no action being taken and once that decision was made they then investigated whether the Mercedes driver gained an advantage by going off track. On lap 4 Hamilton was told that he had to give the place back and so Sainz was allowed though but he could only hold it for one lap before DRS assisted the Mercedes back into P4.

Russell meanwhile had managed to get back ahead of the McLaren and was then right on Sainz’ rear wing looking to get through. The new race winner asked his team to get Hamilton to pick up the pace so the Ferrari wouldn’t also have DRS available but on lap 8 the Spaniard escaped the Mercedes sandwich and was very quickly over a second ahead of the seven time champion.

Lap 9 saw Russell being told he was free to race and quickly flew around the outside of his teammate who felt he was losing power, possibly damage from where he bounced around over kerbs by going off the track on the opening lap.

The big battle after that was over P8 with Vettel trying to get ahead of Esteban Ocon, the German had briefly made it past the Alpine racer earlier but had lost out again a few corners later. Fernando Alonso was just behind the two but just watching rather than attacking. Lap 15 saw Ocon head to the pits which handed the position to Vettel.

Perez and Russell also went to the pits on lap 16, both swapping to hards with the Mexican rejoining in P6 behind Vettel, who swapped places a few times before the Red Bull finally got ahead into P5 the following lap.

Mercedes however had a pretty disastrous stop, with a slow rear right and then Russell almost collided with Norris when he left his pit box, he rejoined the track in P9, with an unsafe release being investigated. The Brit was handed a five second time penalty a little later.

Sainz was the first Ferrari to pit, the Spaniard changing to hards and falling to P7 while lap 19 was Hamilton’s time to stop and he came out in P9 between the two McLarens, telling Mercedes that he thought his floor was broken.

The race leader made his stop at the end of lap 20, which saw Leclerc take over in P1 while Verstappen emerged in P2, 15 seconds behind the Ferrari and just ahead of his teammate. The original order was resumed when Leclerc made his stop a lap later with the Red Bulls first and second ahead of the Ferraris and Mercedes after Hamilton took P6 from Vettel, who was still on his starting tyres.

Vettel headed to the pits on lap 26, changing to hards and rejoining in P19 after telling Aston Martin that he was a sitting duck to the two-stopping cars on fresher tyres around him. The first DNF of the race was Alonso who was told by Alpine that he needed to retire his car from P10 with a suspected water leak.

Lap 34 Perez made a second stop, just as Leclerc was told to do the opposite of whatever the Mexican did. The Red Bull racer put on a fresh set of hards and rejoined in P6, with a ten second gap to Hamilton ahead.

There was a collision between Latifi and Schumacher on lap 38, the Haas racer was trying to get past the Williams but got a bit too close and nudged them both into synchronised spins, and while Latifi’s rear tapped the barrier they were both able to recover and continue, though Schumacher was handed a five second penalty.

Sainz and Russell made their second stops on lap 40 and dropped to P5 and P8, while Perez ahead was closing in on Hamilton. The Red Bull racer made his move on lap 46 but the Brit fought back to retake the position. The following lap though the Mexican made it work and then had another ten second gap to close, this time to Leclerc in P2. The Ferrari driver had decided not to make a second stop despite his team telling him he’d be overtaken at the end of the race.

Vettel had made it back into the points but was demoted on lap 49 by his teammate Lance Stroll and then asked his team how they got their strategy so wrong after such a good starting position for the German.

As Perez was closing on Leclerc he was told that Verstappen couldn’t drop back to hold the Ferrari up as doing that would give the Monegasque DRS which would make it harder for Perez to pass.

On lap 55, just as Hamilton was complaining about the strategy, he started to struggle with his shifts which Mercedes believed was a hydraulic problem. The Brit dropped back and then retired to the pits, which brought Vettel back into the points.

Perez’ charge on Leclerc was delayed by traffic when he ended up behind the squabbling Zhou and Gasly and that was enough to help Ferrari as Perez could only get to 1.3 seconds of Leclerc before the chequered flag.

Verstappen took the chequered flag for his fifteenth win of the season and was joined by Leclerc and Perez, the three will recieve medals as well as trophies on the podium as, from now on, that will be the new normal so that the drivers have a memento from the race as their teams normally get to keep the original trophies. Sainz ended his season with a P4 ahead of Russell, the only Mercedes to finish.

Norris took the fastest lap of the race, a 1:28.391, and finished P6, a second ahead of Ocon while Stroll was P8. Ricciardo and Vettel ended their final races with points in P9 and P10, which leaves them equal on points in the standings.

After the top three had celebrated on the grid and were parking up, Vettel was able to perform doughnuts himself on the start-finish straight before he was also interviewed with the top three. The German will leave the sport after 299 starts, 53 wins, 122 podiums, 57 poles and was also celebrated by the public who voted him Driver of the Day to show their appreciation.

The other drivers who won’t be on the grid next year, Schumacher and Latifi – who got a little bit of coverage on the race broadcast thanks to their collision – the Haas racer ended P16 ahead of his teammate despite his five second penalty, while the Williams driver retired a few laps before the end.