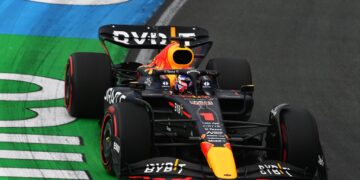 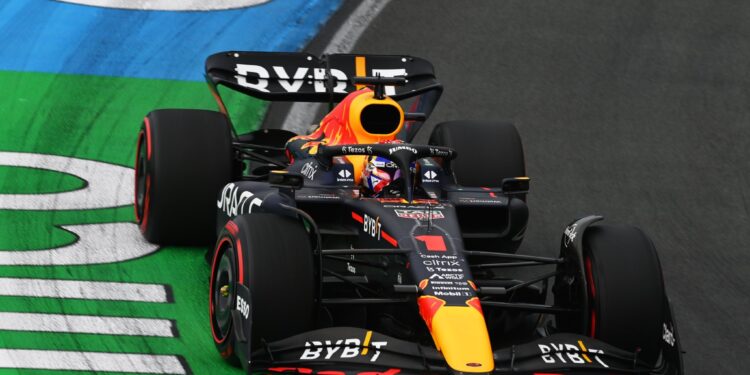 After such a close-fought qualifying yesterday, just 0.021 seconds separating Max Verstappen and Charles Leclerc, will the race be as tight or will Verstappen blast ahead with pace like he had in Spa last time out?

The red-ringed soft tyres were the majority choice for the start of the race but, as always, there were some on an alternative strategy with Lewis Hamilton P4, George Russell P6, Lando Norris P7, Mick Schumacher P8, Alex Albon P15 and Kevin Magnussen P18 all pinning their hopes on the medium compound instead.

There was no change in the top five at the start, Verstappen holding off the Ferrari challenge on the way to the first corner. There was some slight contact between Carlos Sainz and Lewis Hamilton as they fought over P3 but the Ferrari remained ahead as the opening lap continued. There was almost a Haas in the barriers on lap two as Magnussen as the Dane went through the gravel and scraping his car along the barriers but did manage to hold it and keep going.

Five laps in and Verstappen hadn’t managed to pull a gap, Leclerc just outside of DRS range but still in contact. It was closer between Sainz and Hamilton a few seconds further back with the seven-time champion right on the Ferrari’s rear wing and ready to pounce if there were any mistakes from the Spaniard.

Lap 10 saw Fernando Alonso flying past one of his potential replacements, Pierre Gasly, the Alpine racer using DRS to help him zoom past the AlphaTauri, throwing sparks up behind him and a couple of laps later he did the same to Yuki Tsunoda too to move up to P11.

The first of the pit stops started around then with Sebastian Vettel kicking things off on lap 11. The first of the top drivers to duck into the pits was Sainz, Perez following him in, it was a disaster for the Ferrari driver as a late call meant there wasn’t a rear left tyre ready so the Spaniard had to wait. A 12.7 second stop saw him fall from P3 to outside the points places. Perez meanwhile, whose pit box is right behind the Ferrari’s, ended up driving over the spare Ferrari wheelgun which was in his way as he headed back to the fast lane, the stewards will be looking at the incident after the race.

Back on track there was some fantastic side-by-side action between Vettel and Schumacher as they battled for P15, it ended with the Haas driver taking the position and all bodywork intact despite how close the two were manoeuvring around the track together.

Lap 18 saw Leclerc make his first stop, luckily for him everything went smoothly so he rejoined in P4 and the following lap Verstappen followed suit and emerged still five seconds ahead while the yet-to-stop Mercedes took over the top two positions.

While the Mercedes continued to circulate, looking like a one-stop was on the cards for them, Verstappen was closing up on Russell and at the start of lap 28 the Dutch driver was back up to P2 with his sights now set on Hamilton while Leclerc wasn’t managing the same pace as the Red Bull, still six seconds behind Russell.

The end of lap 29 saw the first of the Mercedes head to the pits, Hamilton swapping to the hard tyre and rejoining in P5, five seconds behind Perez. That saw Verstappen back into the lead of the race and when Russell made his stop a couple of laps later, rejoining behind Hamilton, the early race lineup of a Verstappen/Leclerc 1-2 was reinstated.

The hard tyres were working very well on the Mercedes cars in the early stages with Hamilton and Russell swapping fastest laps as they closed up on Perez in P3. Lap 36 saw Hamilton make a move on the Mexican into T1, the Red Bull locking up and there was almost contact between the two but Perez managed to hold the position.

It was close between the two for the remainder of the lap but the next time they got to T1 the Mercedes made it stick though with Vettel emerging from the pits ahead of the battle, that almost gave Perez a chance to retake the place. A few laps later Russell also got past the Red Bull, demoting the Mexican to P5.

Lap 41 saw Perez into the pits for his second stop, rejoining in P7 on the hard tyres. A few laps later Sainz did the same, this time with all tyres waiting for him at the same time. Just as the Ferrari rejoined in P9, there were Yellow Flags as Tsunoda, who had also just pitted, pulled to the side of the track complaining that his tyres hadn’t been fitted properly. AlphaTauri then clarified that all was okay so the Japanese driver got back going.

Lap 46 saw Leclerc make his second stop, dropping the Monegasque driver back behind the Mercedes cars in P4. At the same time Tsunoda was back in the pits with tyres being changed while the team also checked things in his cockpit. Once again though, he pulled off the track and stopped on his out lap, this time a Virtual Safety Car being called to cover it.

The top three – Verstappen, Hamilton and Russell – all made their stops under the VSC, the Red Bull putting on the hards while the double stacked Mercedes drivers both took mediums. The three rejoined in the same positions they were in with Verstappen emerging with a 16 second gap back to Hamilton.

The race was back to green flag racing on lap 50 but six laps later the Yellow Flags were out again as Valtteri Bottas stopped on the start-finish straight. Things got difficult for Sainz as he passed Ocon beside the stricken Alfa Romeo just as the yellows came out. He clarified with the team that he would have to give the position back, but wasn’t able to do so before the pit stops occurred while left Sainz P6 with Ocon in P9.

The Safety Car was soon called out to deal with the issue, Verstappen, Leclerc and Perez all ducking into the pits as it did. The three rejoined in P3-P5 giving track position to the Mercedes drivers while Verstappen and Leclerc had swapped to the soft tyres with Perez on the mediums.

The Safety Car then led the cars through the pit lane to allow Bottas’ car to be recovered and Russell took the opportunity to change to the softs, dropping him behind Verstappen. Things got a bit more awkward for Sainz as he also changed tyres and as Norris was in the pit box ahead of him which meant the Ferrari driver’s exit from his stop was slower than normal as he manoeuvred around the McLaren mechanics and that left him emerging right in front of Alonso, with the Alpine having to brake to avoid contact.

The race got back underway on lap 61, and it was advantage Verstappen as the tow and the soft tyres helped him back into the lead on the start-finish straight. The Ferraris were also in the hunt on the restart, Leclerc battling with Russell while Sainz got the better of Perez for P5.

Hamilton was not happy with his team and how the strategy had played out. On lap 64 there was nearly contact between the two Mercedes as Russell on the softs overtook his teammate for P2 and a lap later the seven-time champion dropped off the podium as Leclerc also breezed past Hamilton.

Three laps from the end, just as Sainz was complaining about his tyre degradation, the stewards also handed him a 5 second penalty for his unsafe release, which at that point would’ve dropped him from P5 to outside the points but how exactly it will impact him will be seen in a few laps.

Verstappen took the win with the contraband flares making their appearances after the chequered flag to cover the circuit in a blanket of orange smoke. The home hero was joined on the podium by Russell and Leclerc while Hamilton just missed out on another trophy in P4.

Sainz crossed the line in P5 but his penalty dropped him back to P8, promoting Perez to P5 while Alonso came home in P6. Norris took P7 for McLaren while Ocon and Stroll took the final points places.