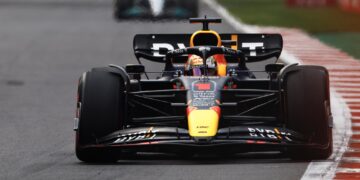 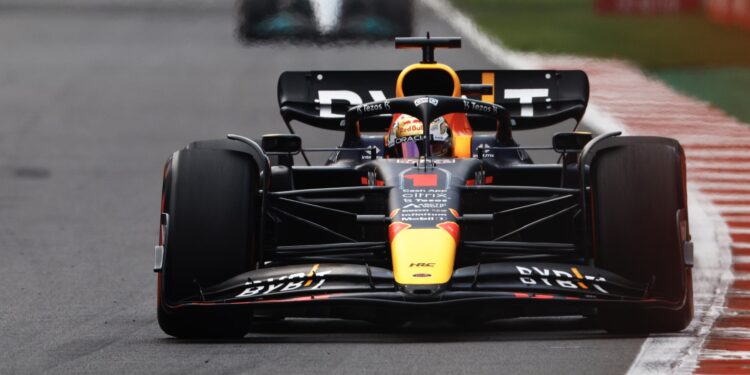 On his first lap out of the garage, Kevin Magnussen reported back that there was something wrong at the rear of his Haas, potentially gearbox or suspension issues, but it ended up being something easier to fix – a loose rear right wheel. A mechanic was seen to be able to remove it without a wheel gun so the team will most likely be fined for sending the Dane out with a loose wheel.

Verstappen had George Russell alongside him on the front row and the Dutch driver held the lead but behind him Lewis Hamilton got the better of his teammate to take P2 before Perez demoted the younger Mercedes driver out of the podium spots, a move which was greeted with roars of approval from the crowd.

Further back in the top ten, Leclerc and Fernando Alonso both got the better of Valtteri Bottas, which pushed the Alfa Romeo driver down to P8. After the opening few laps Verstappen hadn’t managed to pull much of a gap to Hamilton, the seven time champion was out of DRS range to the Red Bull but only by a little.

The Ferraris though had fallen back from the top four and were in a world of their own as they had a big gap behind them to Alonso, the Spaniard with a train of cars on his tail.

Lap 13 saw a good fight between Lance Stroll and Pierre Gasly for P15, the Aston Martin driver had been on the radio a lap or so earlier complaining that there was no grip, but he and Gasly did have some nice battling before the AlphaTauri managed to get ahead as the two cars went wide and into the run off. Gasly didn’t give the place back and the stewards took interest and gave the Frenchman a five second penalty a few laps later, and at that time the AlphaTauri was almost four seconds ahead of Stroll.

Verstappen radioed his team on lap 17 complaining that he was struggling with bouncing which meant he couldn’t drive the kerbs as he would like. The following lap saw the first pit stop of the race, Stroll swapping to the softs and rejoining last.

On lap 23 Perez was the first of the front runners to pit, the Mexican swapping to mediums after a slow stop with his left rear not changing as smoothly as the rest. He emerged in P6, four seconds behind the Ferraris.

Two laps later Verstappen made his stop, this one running perfectly, and the Dutch driver got back on track in P3, fourteen seconds behind Russell. Hamilton took over the lead of the race, the Mercedes driver unusually reporting that his tyres felt okay.

There were more raucous cheers when Perez dispatched Leclerc for P5 and then on lap 28 there were slight issues for both Verstappen and Hamilton as the Red Bull racer complained about his shifts while Hamilton was worried about cuts in his engine. The British driver then pitted on lap 30, Mercedes swapped him to the hards before he rejoined six seconds behind the reigning champion.

Verstappen was back in the lead on lap 35 when Russell followed Hamilton’s lead to also put the hard compound on. A few laps earlier the British racer had seemed to be looking at a potential one-stopper after asking to go to the softs for the end with the team replying that they’d have to go a long way to make that work.

The hards didn’t have the pace of the mediums, Hamilton losing time to Verstappen ahead while Perez was closing in from behind in what would be the perfect time for someone to start playing the Jaws theme.

Both Mercedes drivers were heard complaining about the hard tyres but as soon as those messages played out Hamilton put in a very quick lap and started lapping with times closer to Verstappen.

Daniel Ricciardo and Zhou Guanyu were the last two to pit, the McLaren putting in 44 laps on the mediums while the Alfa Romeo made it 45. Both fell out of the points positions as they swapped to the softs for their one and only stop.

The big battle as the lap counter passed 50 was between Ricciardo and Tsunoda for P11. There was some good fighting between them before the McLaren driver made a lunge and went into the side of the AlphaTauri, launching Tsunoda slightly into the air and while the Japanese driver was able to slowly make it to the pits there was too much damage for him to continue. Ricciardo was then handed a ten second penalty.

While Hamilton questioned his team’s decision to use the hard tyres, but Mercedes were still confident and told him that no it was the right choice.

Ricciardo continued his push up through the field, showing the pace of the softs as he got back into the points after dispatching his teammate and then Bottas in short order, both of those drivers on the hards, and the Australian then set his sights on Ocon and Alonso who were also on hards ahead of him.

Alonso’s race started to unravel on lap 61 as his teammate, on slightly older tyres, closed up to him before getting past and then the Spaniard also lost out to Ricciardo, who only took another lap to fly past the other Alpine and settle into P7. With over a 45 second gap to Leclerc in P6, and less than ten laps left, it didn’t look like Ricciardo would be able to make up any more spots.

Lap 65 saw the Virtual Safety Car being brought out as Alonso pulled off the track with smoke coming out of his Alpine. Just behind Alonso as he was heading to the run off area, Norris moved back into the points as he passed Bottas for P10 and then with Alonso’s retirement, Norris inherited P9.

Lap 66 Russell went through debris and wanted to pit as his tyres were “gone” but was ordered to stay out as Perez’ tyres were worse than his and he was only 5 seconds behind the Mexican.

Verstappen took the chequered flag over fifteen seconds ahead of Hamilton to seal his fourteenth win of the year, a new record for most Grand Prix victories in a season. Home hero Perez wasn’t able to catch up enough to fight Hamilton and came home for another podium in Mexico.

Russell finished P4 with the Ferraris of Sainz and Leclerc behind after a very anonymous race from the scuderia. Ricciardo’s pace meant he was able to pull out enough of a gap to Ocon that even with his ten second penalty, the McLaren racer still had a 2.1 second gap and kept his P7. Norris finished behind Ocon while Bottas took the final point.