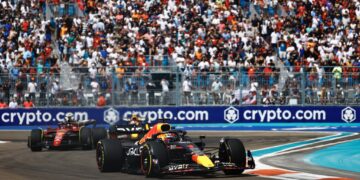 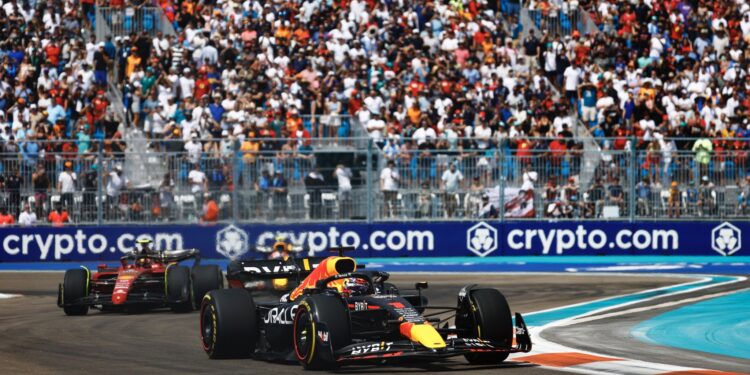 Miami Grand Prix – Max Verstappen has taken victory as Formula 1 returned to Miami, with the Dutch driver putting in an early pass on Charles Leclerc to seal the win for Red Bull.

Max Verstappen has won the Miami Grand Prix, climbing from third place on the starting grid to defeat the Ferrari duo who started from the front row.

The Red Bull driver has sliced Charles Leclerc’s championship lead down to 19 points, with Verstappen also setting the race’s fastest lap to claim the maximum points available. The championship leader was left to settle for second place, with Carlos Sainz rounding out the podium after a spirited defence against Sergio Perez.

Verstappen sets the standard early on

It was an 18 car grid for the inaugural F1 race around the Miami International Autodrome as both Aston Martins, who were set to start in P10 and P13, elected to start from the pitlane. The team had cooled their fuel too much and, had they headed to the grid, would have been given penalties for the too-cold fuel. To avoid that, they kept the cars in the garage to allow time to warm the fuel to the correct temperature instead.

The Medium tyre was the choice compound for the majority of the field apart from Lance Stroll (pits), George Russell (P12), Sebastian Vettel (pits), Nicholas Latifi (P19) and Esteban Ocon (P20) who started on the Hards.

It was an all-Ferrari front row at the start, but Verstappen didn’t allow the Scuderia more than a few metres of 1-2 running in the race, as he got alongside Carlos Sainz at the first corner and was in P2 by the second. Behind them, it was Fernando Alonso who had one of the better starts, the Alpine driver jumping up to P7 ahead of Lewis Hamilton, who lost a couple of positions on the opening lap.

The Spaniard had given the rear of the Mercedes a wheel-to-wheel hit as he passed – Hamilton felt he took damage from that contact – but that didn’t hold the seven-time champion back as he made it back to P6, where he started from, getting past Alonso and Pierre Gasly over the course of the following few laps.

The first retirement of the race came on Lap 7 as Zhou Guanyu pulled into the Alfa Romeo garage with a technical issue while, at the front, Verstappen had been told Leclerc’s tyres were looking worse for wear. The Dutchman closed up and slipped past the Ferrari at the first corner on Lap 9.

While Leclerc was initially able to keep within a second of the new race leader, tyre wear and a mistake in T17 then knocked him back to over two and a half seconds adrift. After his great start, it was not an ideal pit stop for Alonso as he tried to undercut Gasly ahead of him. The Alpine had a slow stop, with a rear tyre not cooperating, and had come out in P13, right in front of Stroll which led to some good battles between the two, and also some enjoyable moves by Vettel on Latifi right behind them.

There were some panicked moments for Perez on Lap 20 as he started losing power and dropped from less than a second to nearly seven behind Sainz. It didn’t help the Mexican that his engineer was reporting that all looked good with the power unit while Perez was dramatically off the pace and asking “how can you say this is good?”. The issue appeared to rectify itself over the next lap but the Red Bull driver had lost a lot of time.

On Lap 25, the first of the frontrunners headed to the pit lane, Leclerc taking the Hard compound and rejoining in P4, two laps later and Verstappen also swapped to the harder tyres and Ferrari were briefly back in the lead of the race before both Sainz and Perez chucked their Mediums and the pre-pit order was resumed.

Perez’s engine issues a few laps earlier turned out to have been a saving grace for Sainz as the Ferrari driver had a sticky front right wheel nut during his stop and the eight-second gap to Perez was halved.

Once the majority of the stops had been completed, the main action on track was the four-car battle for P12 with the two Haas cars, Vettel and Lando Norris all line astern and looking to progress. Mistakes were key in the battle as first Magnussen and then Vettel ran wide allowing Schumacher and Norris to move up one place each.

With twenty laps to go, it was Gasly involved in all the action, firstly getting hit by Alonso as the Alpine driver passed him for P9 (Alonso was subsequently handed a five-second time penalty), the AlphaTauri fell back as a result of the contact and seemed to be struggling and he and Norris touched wheels as the McLaren went past. It was race over for Norris as his tyre delaminated and the young Brit went spinning down the track.

The Virtual Safety Car and then the full Safety Car were called, which played perfectly into Russell’s hands. The Mercedes driver was still circulating on the Hard tyres he had started on and, only a few minutes earlier, had told the team “Why don’t we keep going and see if there’s a VSC or something?”. Russell was able to pit under the VSC and rejoin in P7, just behind his teammate. Perez, in P4, also took the time to swap to the mediums and not lose any positions.

The race was back to green flag racing with 10 laps to go and, while there were no changes at the front, both Leclerc and Perez were very close to the drivers ahead of them. Leclerc was very eager to retake the lead, keeping Verstappen under pressure through the DRS zones – the Dutch driver succeeding in holding his nerve.

Further back, there was a great inter-team battle between the two Mercedes drivers for P6, thanks to a mistake and brush of the wall for Valtteri Bottas, the two moved up and demoted the Alfa Romeo to P7, while the fresher tyres on the younger Brit saw Russell take P5 from Hamilton though that position would swap a few times.

On lap 52 Perez made his move on Sainz but the Mexican locked up, going too wide and the Ferrari was able to remain in the final podium position. Further back it was heartbreak for Schumacher, who was in P9 and looking good for his first Formula 1 points but Vettel had just slipped past while the Haas driver was battling Ocon and then the two Germans made contact knocking both out of the points and the race.

In the final few laps the top runners had all managed to move out of DRS range so there was less pressure for Verstappen in the Miami heat as he took the chequered flag ahead of the two Ferraris. Perez came home in P4, ahead of the two Mercedes, with Russell and his fresher tyres having gotten the better of Hamilton.

Bottas was P7 in another very solid points position, with Ocon and Alonso in P8 and P9 the Spaniard dropping behind his teammate after his five-second penalty was added, while Alex Albon once again brought home points for Williams in P10.