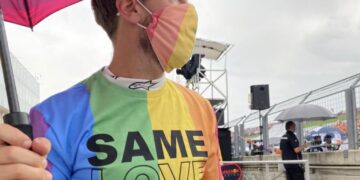 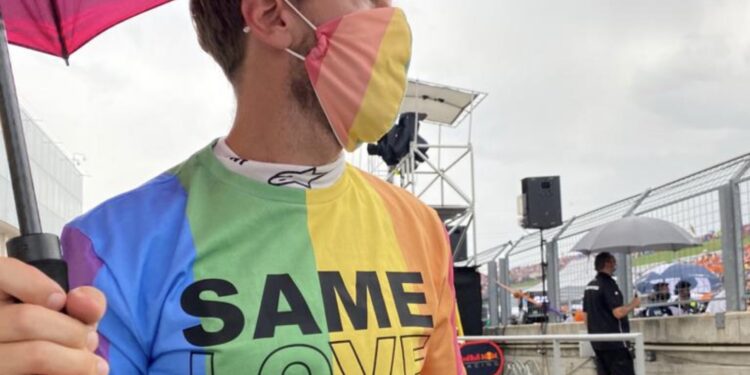 Hungarian Grand Prix – Reprimands have been handed out to five drivers, including the top 2 finishers, for breaching the pre and post-race procedures.

Sainz was informed of his summons after his interview on F1’s official Post-Race Show, the offence was initially believed to have been for team radio on the formation lap. However document 37 covered the We Race As One and national anthem procedure and the issue was clarified by Vettel in his Sky F1 interview.

“I heard it’s because I left the shirt (a rainbow striped t-shirt with “Same Love” written on it) on for the national anthem.” The German had been putting out a pro-LGBTQ+ message all weekend with rainbows on his shoes, mask and helmet along with the t-shirt against the Hungarian government’s outlawing of homosexuality and trangender issue in curriculum and media aimed at minors.

“I’m happy if they disqualify me,” Vettel went on to say. “They can do whatever they want to me, I don’t care. I would do it again.”

All of the drivers received reprimands with the explanation on each of the decision documents giving identical reasons for the infringement and resulting reprimand: “The driver explained that he forgot to take off the WRAO [We Race As One] t-shirt in time during the national anthem because of the onset of rain.”

Ocon’s breach of post-race procedure was that he didn’t bring his car to parc ferme and park in the designated area for the top 3 drivers. After talking to the stewards the young Frenchman was also handed a non-driving reprimand and promised to be more careful next time.

The decision document for Ocon reading: “Race Director’s Note for the post-race procedure (Doc. 38) requires drivers who finish the race in the top three positions to return to pit lane and stop at the boards showing their positions located in front of the Race Control tower. OCO, who finished in 1st place, failed to do so and parked his car on the track near the end of the pit lane.

“During the hearing OCO explained that he missed the pit entry and figured that the best place to stop would be close to the pit exit. He apologized and confirmed to be more careful next time. The Stewards do not assess this as a breach of parc ferme regulations. OCO did not follow the RD’s instructions however and therefor a penalty as stated above is appropriate.”