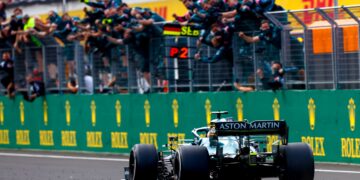 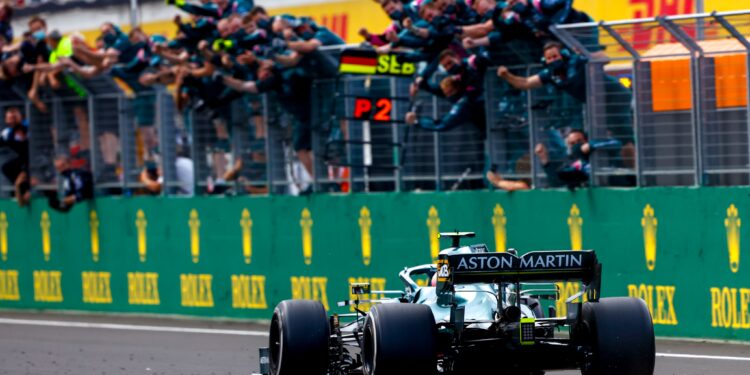 Hungarian Grand Prix – Sebastian Vettel has been disqualified from the race as there was insufficient fuel left in his car.

Vettel has had a rollercoaster of a Hungarian Grand Prix but unfortunately for the Aston Martin driver, he ends his day empty handed after his second place was taken from him as his car only had 300ml of the required 1 litre of fuel available in it after the race.

Starting in P10, Vettel had a poor start which saw him lose places but that turned out to be the only reason his car made it past the opening lap as he avoided both the Bottas and Stroll incidents, to follow Esteban Ocon through the debris to find himself P3 as first the Safety Car and then the Red Flag appeared.

At the end of their lap to the grid for the restart, Vettel, and all the cars behind him, followed Ocon into the pitlane to switch from Intermediate to dry tyres leaving Lewis Hamilton as the lone car to take to the grid for the standing restart. When the Mercedes had to pit for his own swap to a dry compound tyre at the end of that lap it left Ocon and Vettel in the lead of the race.

Despite the German making multiple attempts, he couldn’t quite make a move for the lead stick and so took the chequered flag for his second P2 finish of the season. Vettel was then one of three cars to stop on track, Russell for unknown reasons, while Ocon missed the pit entry at the end of his victory lap and then parked at the pit exit instead.

While Vettel was initially summoned to the stewards and handed a reprimand for keeping his pro-LGBTQ+ t-shirt on during the national anthem in the build up to the race, it was three hours after the chequered flag that the scrutineers reported the fuel issue to the stewards.

While the Aston Martin driver had said “I’m happy if they disqualify me. They can do whatever they want to me, I don’t care. I would do it again.” in response to being summoned for his breach of pre-race procedure, little did anyone know that that would be the result at the end of the day, just not for that crime.

The Stewards decision read “After the race it was not possible to take a 1.0 litre sample of fuel from car 5. The team was given several opportunities to attempt to remove the required amount of fuel from the tank, however it was only possible to pump 0.3 litres out.

“During the hearing in presence of the FIA Technical Delegate and the FIA Technical Director the team principal of Aston Martin stated that there must be 1,44 litres left in the tank, but they are not able to get it out. This figure is calculated using the FFM or injector model.

“The Stewards determine to apply the standard penalty for technical infringements. Therefore they took into account, that it shall be no defense to claim that no performance advantage was obtained.”

That means Lewis Hamilton moves into P2 with Carlos Sainz taking the final podium spot. Fernando Alonso will now be P4 with the two AlphaTauris, of Pierre Gasly and Yuki Tsunoda, P5 and P6 respectively.

Williams’ double points finish will now see the team having their strongest year since 2017 with Nicholas Latifi and Geroge Russell moving into P7 and P8 to take 10 points for the team.

Max Verstappen will double his points from Hungary with P9 awarding him two but Vettel’s disqualification means Hamilton gains three additional points and so moves slightly further ahead of the Dutchman in the championship standings. The final points position will now go to Kimi Raikkonen.