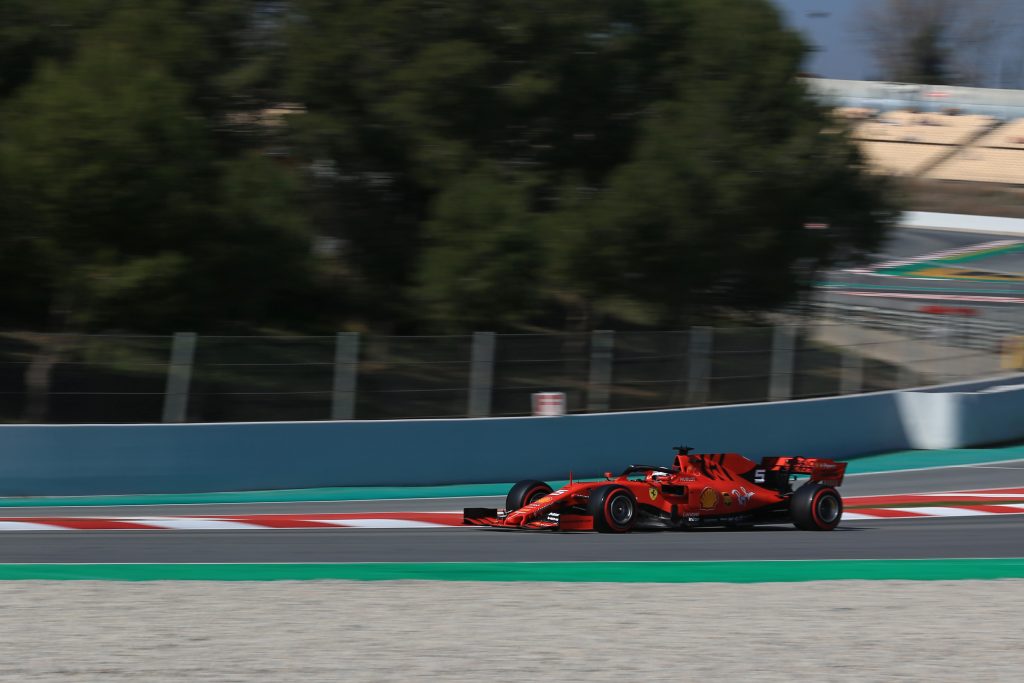 Ferrari’s Sebastian Vettel was quickest on the final day of pre-season testing as he put in the fastest time of the test overall, but their day was marred by an electrical issue that ended their day early.

Times were expected to tumble on Day 4 of the second test in Barcelona, due to the sandbags being slowly dropped by the teams as testing came to a conclusion. Ferrari did so first – putting in a 1:16.221 during the morning session on the softest C5 tyre. Vettel’s time was the fastest of testing overall, just marginally beating Charles Leclerc’s time on the same tyre from Thursday.

However, Mercedes certainly weren’t far behind. After spending the majority of the day making comments to the press about how he felt Ferrari had half a second pace over Merc, Lewis Hamilton went on a very late C5 tyre dash and put in a 1:16.224 – just 0.003 seconds off Vettel’s time on the same tyre. Even more encouragingly for Mercedes, he also did a 1:16.6 on the C4 tyre. This was a quicker time than either Ferrari managed on that compound throughout testing and, Pirelli data on tyre deltas adjusted, suggests Merc are capable of a 1:16.0.

Valtteri Bottas, driving the Mercedes during the morning session, also had a crack on the C5 and did a 1:16.5. Mercedes also managed the higher mileage on the final day between the two drivers as they logged over 110 laps. Sebastian Vettel did 110 laps exactly but Ferrari’s day came to a premature end during the afternoon as an electrical issue forced the German to park the car.

Nico Hulkenberg finished P4 for Renault after a similarly late run on the C5 tyre. The German driver took over from Daniel Ricciardo for the afternoon and racked up 49 laps in total.

Daniil Kvyat topped off a promising pre-season for the Toro Rosso team by finishing P5 on the timesheets. He did a total of 128 laps over the course of the day. Carlos Sainz was P6 for McLaren and did a 1:16.913 on the C5 tyre and a total of 134 laps.

Romain Grosjean was up next in P7 as he made up for his early stoppage during Thursday’s track time. He did 73 laps altogether during the morning session, before handing over to Kevin Magnussen in the afternoon. Magnussen brought out the red flags in the final half hour of track time when he stopped on track approaching Turn 5, ending Haas’ testing prematurely.

The Danish driver finished 10th in the timesheets with a total of 94 laps logged. Daniel Ricciardo was P8 for Renault after driving the morning session, putting up 52 laps during his last outing before the season opener, while P9 went to Kimi Raikkonen’s Alfa Romeo. The Finn was another Ferrari powered car to break down during the day, bringing out the red flags just before the lunchtime break.

Max Verstappen was P11 for Red Bull Racing, having missed most of the afternoon due to a gearbox problem. The RB15 required extensive rebuilding after Pierre Gasly’s crash on Thursday, but Verstappen was able to get out on track and put up 29 laps over the day.