Click here for the complete results from the 2019 Singapore Grand Prix.

Ferrari’s Sebastian Vettel has claimed victory at the Marina Bay Street Circuit in Singapore, pipping his teammate Charles Leclerc to the chequered flag by just 2.6 seconds.

Vettel was the beneficiary of a strategy call made ahead of the pitstops. Polesitter Charles Leclerc had held the lead convincingly off the line to lead Lewis Hamilton’s Mercedes, with Vettel immediately applying the pressure to Hamilton on the opening lap. However, with all the top drivers aiming to keep their tyres alive as long as possible, it became a game of ‘how slow can you go’, with Leclerc keeping the pace down.

As a result of this, the leading drivers didn’t pull away from the midfield. This meant that none of them could pull the trigger on attempting an undercut of the others without emerging mired in the midfield. However, on Lap 14, Sebastian Vettel dived into the pits from P3 to switch to the Hard tyres. Max Verstappen, right behind the Ferrari, also came in and made the same tyre switch.

Leclerc, holding off Hamilton’s increasing attentions, dived in a lap later and came out of the pits right behind Vettel, who had put in a stonking outlap to snatch the position from Leclerc. Hamilton, now leading, was clearly going to lose position to both Ferraris and didn’t pit for a further six laps. Hamilton pitted at the end of Lap 21 and came out behind both Ferraris, Max Verstappen and only just in front of Valtteri Bottas after the Finn was instructed to back off to make sure Hamilton kept that position.

These stops meant that some of the midfield drivers had moved to the front, with Alfa Romeo’s Antonio Giovinazzi taking the lead and Pierre Gasly in P2 for Toro Rosso. Daniel Ricciardo, in P3 for Renault, was quickly picked off by Vettel, who then hunted down Gasly and Giovinazzi to take the lead again. His daring through the slower cars meant that he led by almost seven seconds over Leclerc by the time the other Ferrari had negotiated his way to P2 again, with Verstappen around four seconds behind Leclerc once he got into P3.

From there, the race turned quite chaotic. A collision between Williams’ George Russell and Haas’ Romain Grosjean at the halfway point brought out the Safety Car, eliminating Ferrari’s lead. Upon the restart, Ferrari promptly started pulling away from Verstappen again but, just a few minutes later, the Safety Car was out again to cover the recovery of the broken down Racing Point of Sergio Perez on the back straight. These Safety Car periods allowed Ferrari to mind their tyres and ensure they made the flag without any issues, meaning Verstappen and Hamilton were never given a proper chance to attack the Ferraris.

Grosjean and Russell collide, and the Williams is out

A further Safety Car period came with ten laps to go when Daniil Kvyat’s Toro Rosso and Alfa Romeo’s Kimi Raikkonen collided at Turn 1, ticking away another few laps for Ferrari. With 9 laps to go on the restart, Vettel eased away from Leclerc with a series of fastest laps, with Leclerc himself pulling away from Verstappen. The Red Bull had to fend off Hamilton towards the flag but held onto P3 to come home behind the Ferrari 1-2.

Valtteri Bottas finished P5 in the other Mercedes, having been instructed to slow down after his pitstop to fall in behind Hamilton, with Alex Albon coming home in P6 for Red Bull.

Lando Norris finished P7 for McLaren after a strong race from P10. He led home Pierre Gasly in P8, with Nico Hulkenberg coming home in P9. The Renault driver was involved in a first lap collision with McLaren’s Carlos Sainz that resulted in both of them needing to pit on the opening lap for repairs. Despite a late race scare where he felt he had a developing mechanical issue, Hulkenberg recovered through the Safety Car phases and some strong overtakes to snatch P9. Antonio Giovinazzi, having led a race for Alfa Romeo and the first time an Alfa has done so in 36 years, finished P10 and took the final point.

Outside the points, Romain Grosjean finished P11 for Haas after surviving his mid-race clash with Russell. Carlos Sainz, having been a lap down by Lap 2 after his Lap 1 clash with Hulkenberg, recovered to P12 and led home Lance Stroll. The Racing Point driver hit the barriers towards the end of the race and got a puncture, but a further Safety Car allowed him to recover on a fresh set of Soft tyres to finish P13.

Daniel Ricciardo was P14. He could have been a points finisher after starting the race on Mediums and enjoying a very feisty opening stint. But, a mid-race clash with Giovinazzi at Turn 7 resulted in a puncture and an unscheduled stop. Daniil Kvyat finished P15 for Toro Rosso, having picked up damage from his clash with Kimi Raikkonen. Robert Kubica finished P16 for Williams after enjoying some battles with midfield cars, and led home the Haas of Kevin Magnussen. The Danish driver was the final classified runner after his tyres fell off the cliff and he needed a further pitstop towards the end for a short Soft tyre sprint to the flag.

No amount of steering wheels could make that wheel point the right way 😩#F1 #SingaporeGP pic.twitter.com/GONRLgkHFG

Kimi Raikkonen, Sergio Perez and George Russell were the three retirements from the race. 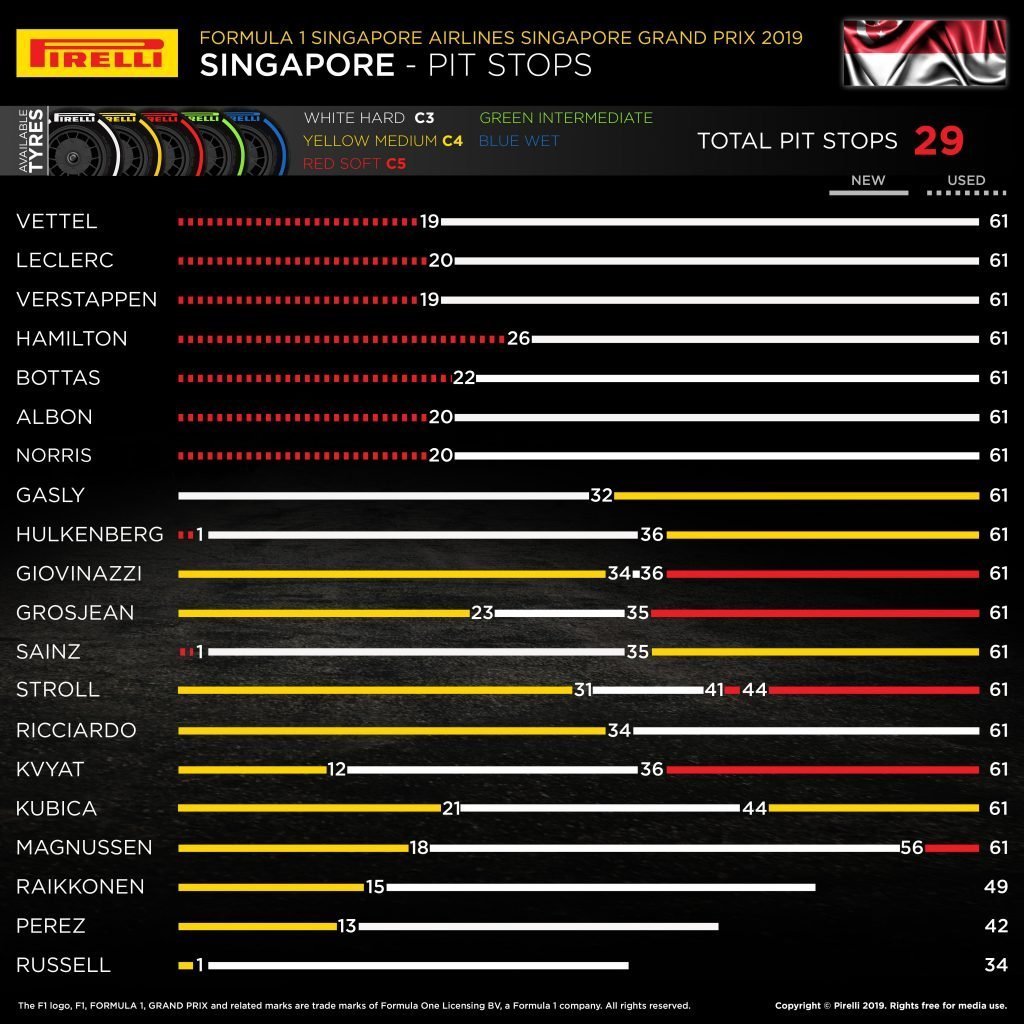