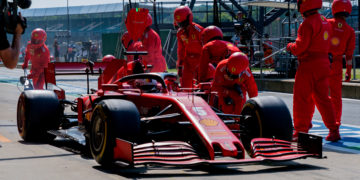 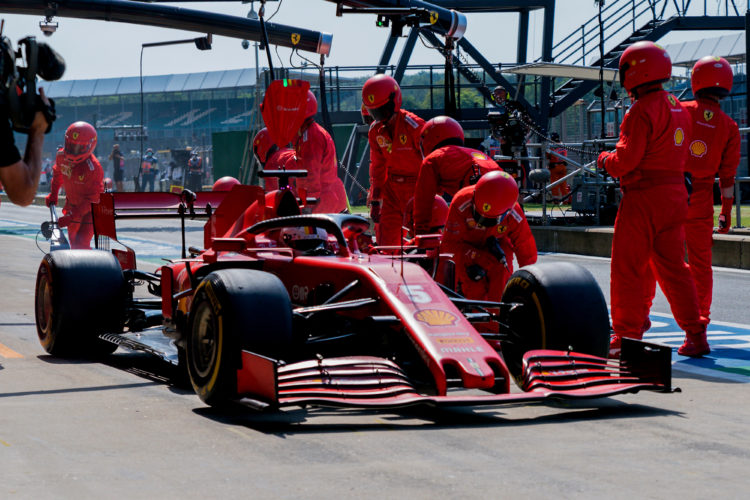 70th Anniversary Grand Prix – Ferrari’s Sebastian Vettel says he was brought into the pits to avoid forcing Charles Leclerc to overtake him on track.

Sebastian Vettel says the tyre strategy he was given on Sunday made no sense, and that his team just wanted him out of Charles Leclerc’s way on track.

Starting on the Hard compound, Vettel compromised his race early by spinning off at Turn 1 while battling with McLaren’s Carlos Sainz. Recovering to the track in last, he was able to catch back up on the train and began slowly picking his way back through the field as the Medium runners pitted.

Vettel came in on Lap 22 for another set of Hard tyres, but he was back in just 11 laps later – this forced him to run 19 laps on the Medium to get to the flag. By contract, Leclerc started on Mediums and pitted on Lap 18 – running to the flag on Hards for a 34 lap stint.

With Vettel emerging in traffic after his second stop, he admonished his team over the radio by saying “You know you messed up”.

Explaining to RTL afterwards, Vettel said the pitstop situation had been discussed on Sunday morning, and the team did exactly what he didn’t want – bringing him in while still running quickly on his second set of Hards.

“We talked about exactly this situation, that if it happened, we wouldn’t have to do what we finally did. It was frustrating.” said Vettel. “I had enough speed to stay out. Those who were ahead of me after my pit stop were doing exactly the same lap times as I did on the older tyres.”

“Maybe we didn’t have the courage to let Charles overtake us, even though he had a different strategy, and we preferred rather to have me stop to avoid him. Even with the bad first lap, we could have gained a lot of ground today.” continued Vettel.

Speaking to Sky Sports F1, Vettel said he was trying to stay calm about the situation, after two dismal weekends at Silverstone. Vettel has just 10 points in the Driver’s Championship after 5 races, and is P13 in the standings.

“The strategy was not great. We did exactly what we wanted to avoid.” said Vettel. “I don’t know what they thought in those moments, but oh well, let’s move on.”

“We have had two very bad weeks. I don’t know what happened in terms of pace. Certainly not the best days for me at the moment, it’s a bit frustrating. I will try to do my best and keep calm as much as possible looking forward.”