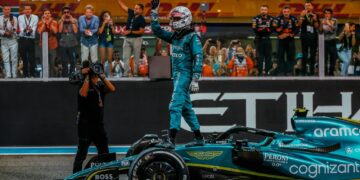 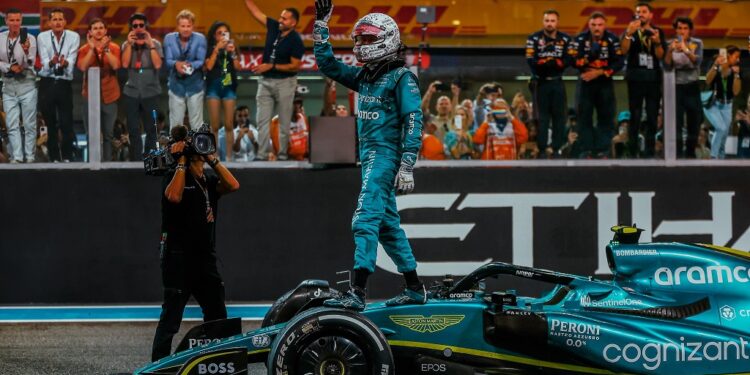 Abu Dhabi Grand Prix – After 299 starts and 53 victories, Sebastian Vettel’s F1 career came to an end with a P10 in Yas Marina.

The Aston Martin driver has been front and centre all weekend with a Lewis Hamilton organised dinner for all the drivers on Thursday, tributes and presents from past teams Red Bull and Ferrari, multiple teams and drivers sporting messages of thanks or, in the case of Fernando Alonso and Mick Schumacher, Vettel style helmets.

Vettel himself invited all personnel and media to run or walk a lap of the track with him on Saturday, an event which was very well attended, while F1 have put up multiple tribute videos as well as having a Danke Seb banner in the track during the pre-race procedure and specifically adding the German into the top three celebrations and post-race process.

From Father to Son ❤️

With a strong showing on Saturday, Vettel was in a good position for the race in P9 and started the race well, battling with the cars around him and moving forward but a one-stop strategy knocked him down the pack and it was only thanks to a late retirement from Hamilton that Vettel was able to finish P10 but it wasn’t enough to get Aston Martin P6 in the championship as that saw them draw on points with Alfa Romeo but the Swiss team had a higher place finish on count back so they will take the position and the higher pay out that goes with it.

“It was a bad strategy and we went backwards,” Vettel said afterwards. “A shame for the team because we could have scored sixth in the Constructors’ today but we didn’t, so a costly mistake at the end. I tried to do what I can and I was happy with the race I had, obviously it wasn’t a race that will be remembered, but happy that we had a full race on our hands and there were some good moments in there.”

Vettel called the weekend as a whole “very special” adding that he was sure he would “miss it more than I understand right now” as he thanked everyone for the support through the weekend and the year. The four-time champion was also voted Driver of the Day by the fans to show their appreciation.

“A very special weekend. I feel very privileged that I had the opportunity to sort of celebrate the goodbye that way and thanks to all the other drivers and for all the support here on the track but also the entire year all the fans – so many nice quotes, messages, gestures – it’s been really special to see.”

After the top three were interviewed on the grid, Vettel, who had also been assigned a place to finish on the start/finish straight after his celebratory doughnuts, also chatted with Jenson Button who was hosting the post-race exchanges and explained that while his time with Aston Martin hasn’t added much more to the record books, it has allowed him to grow as a person and discover the platform he had, and he hopes that other drivers will follow his lead to shed light on and support important issues.

“The last two years have been very disappointing from a sporting point of view, but very, very useful and important to me in my life. A lot of things happened and a lot of things that I realised. I think it’s a huge privilege being in the position that we are in and with that comes some responsibility. So I hope to pass on a little bit to the other drivers to carry on some of the good work. It’s great to see that you know, we have the power to inspire you with what we do and what we say.

“I think there are far bigger and far more important things than racing in circles, but obviously, it’s what we love and through that if we can transfer some of the really important values that’s, that’s big. And I think for that, the last two years have been great for me. So thank you for the support, thank you for the messages, the letters, and all the love in general. I will miss that, it’s been an absolute joy throughout my career, so thank you.”

Over the past few years the German has, along with Hamilton, been the most outspoken about the causes and subjects that he believes need championing – climate, equality and LGBTQ+ amongst them. With different t-shirt and helmet designs with global or local issues that he felt needed a more public platform or just more support, Vettel also lead by example with his post-race clean up, building bee hotels and visiting schools to inspire the younger generations.

“I think you should just be yourself,” Vettel later told Sky Sports F1, “and, as much as you have role models and you try to learn things here and there, you still have to find your own way. You have to find what works for you and stand up for the things that are important to you. They don’t have to be the same for all of us, that would be a shame because we’re all different.

“I think it’s celebrating that diversity in many ways and learning to speak up for it because in the end of the day, it is a massive joy to drive these cars, to live that life, to have people working so hard for you day in and out to make your car, your day, your race just that little bit better.

“With that I think comes also a little bit of responsibility that you might not be aware of when you’re young, and that’s good, but you are able to grow with experience, with time and try and give a little bit back. It means the world to people to stand up for some of the things that are important to you and express your opinion.”

Lando Norris with a truly touching message of thanks to Sebastian Vettel ❤️ pic.twitter.com/K7PrKD4K6F