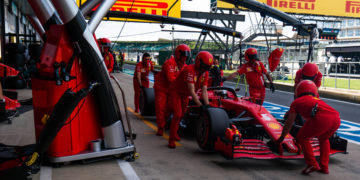 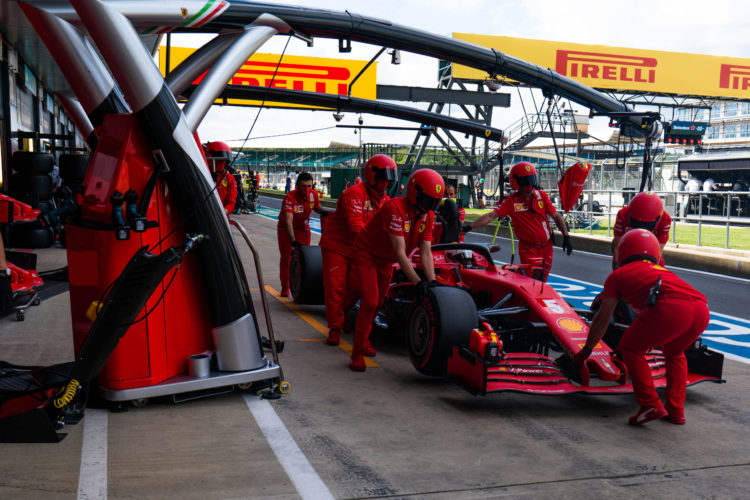 Sebastian Vettel will start Sunday’s race at Silverstone from P10, having managed to make it through into Q3 despite expectations.

The German driver has had a shocking weekend so far, starting off straightaway at the start of first practice on Friday. An intercooler problem meant Ferrari knew from the start of the session he wouldn’t get out on track, meaning he was left kicking his heels in the garage while the team worked on getting him on track.

At the start of FP2, he managed to get out on track for a few minutes before he radioed in to report he could feel something loose moving around at his feet. There was no joking around on team radio about this, unlike when it happened at Brazil in 2018. Instead, TV pictures showed him getting his hands stuck in and investigating the issue himself, although not him actually finding anything. Ferrari then confirmed they would change his pedal box, suggesting that it was the pedals themselves loose on the SF1000.

Vettel did manage to get out on track again towards the end of FP2, but it was with a truly evil handling car. Onboard footage showed Vettel struggling to control the car, missing braking points and fighting for grip as the car understeered its way around the track. He finished 1.2 seconds behind Charles Leclerc in that session.

Heading into FP3, and it was more of the same. Vettel headed out on track, before radioing in that he could feel something loose at his feet again. He came back into the pits, again having to rummage around in the pedal area before Ferrari fixed it up. He finished P14, and 1.3 away from the front. Charles Leclerc was half a second clear in that session.

Then, in qualifying, Vettel somehow managed to get the car into Q3. He was a tenth quicker than Leclerc in Q1, but Ferrari opted to split strategies in Q2. They sent Leclerc out on Mediums, with Vettel on Softs. With these being the tyres intended to be used for the first stint in the race on Sunday, this decision was arguably in Leclerc’s favour. Vettel went slower on the Softs than Leclerc managed on the Mediums, before Sebastian came out again on the Mediums. Leclerc came out on the Softs but aborted his lap as it became obvious he’d get through, but Vettel had to rely on his Soft tyre time to get into Q3.

With all on Soft tyres for Q3, Charles Leclerc did a 1:25.427 to take P4 – a very respectable performance at a track that really doesn’t play to Ferrari’s strengths this year with a sub-par power unit. Sebastian Vettel could only manage P10, with a time 0.9 seconds away from what Leclerc achieved and a full two seconds away from pole position. He did do a better lap time on his final run, doing a 1:26.077, but this laptime was deleted for track limits at Copse corner. It would have only given him P9 anyway, and still 0.6 away from Leclerc on the same tyre. Intriguingly, Red Bull’s Helmut Marko has said that his team are mystified by Leclerc’s pace: “It is a mystery to us where Leclerc got the speed. He was faster on the straights than we were. However, that only seems to have been the case for him, not for Vettel.”

Vettel has been asked whether he feels there’s any favouritism going on at Ferrari, with him being dropped from the team at the end of this year. Speaking to Autobild, he said “No. Yesterday was certainly not a good day. There were a few things that were wrong but I don’t want to accuse someone of any bad intentions.”

“I struggled to find the rhythm,” he continued. “The car was not too bad but it didn’t fit me today. I was struggling yesterday with very little laps and this morning to get into the rhythm.”

“How much I don’t know. I can’t promise anything, but it can’t get much worse. I think it’s probably more me just making sure everything comes together.”

“So not a good good session, but let’s see what we can do tomorrow.”

Speaking to AutoBild earlier this week, Vettel was asked about his time at Ferrari as he heads into his last months with the team after six years: “I don’t regret the time I had at Ferrari. I think I might not have the support I needed, wanted or requested here and there, but overall I always had people around me who were ready to help me both on the track and in Maranello.”