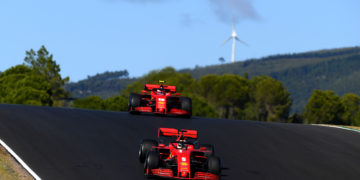 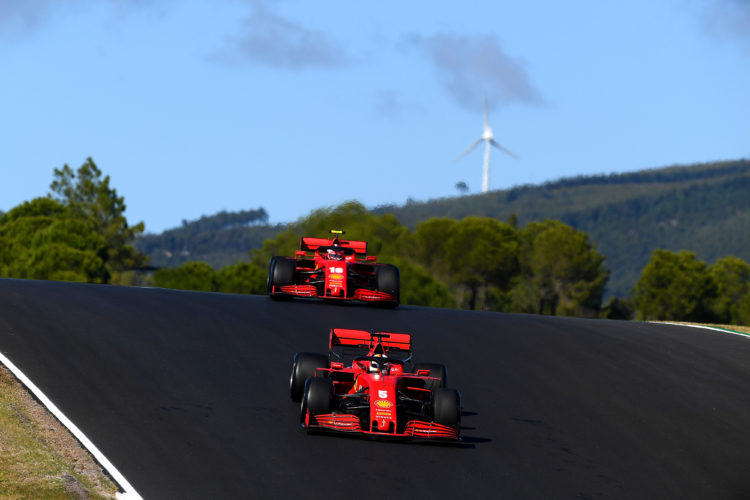 Ferrari’s Sebastian Vettel says he’s confident that he is being given the exact same car specification as teammate Charles Leclerc, as he has trust in the team.

The gap between Charles Leclerc & Sebastian Vettel has been eye-opening throughout 2020. Having been very similar in pace in 2019, Leclerc has very much been the driving force of the team this year, while Vettel has struggled for pace at every single race.

While Leclerc is currently P5 in the Driver’s Championship with two podiums and five other podium finishes, Vettel is languishing down in P13 with a best result of P6 in Hungary. In the last six races, Vettel has scored just two points with two P10 finishes.

The gap in Portimao perfectly illustrated the story of both driver’s seasons. While Charles Leclerc spent most of the weekend in P4 and staying close enough to Max Verstappen to keep Red Bull on their toes, Vettel wasn’t able to get anywhere near the pace of his teammate.

Qualifying was a good indication of this. Ferrari were the only team, apart from Mercedes, that were confident enough to try getting through Q2 on the Medium compound. Leclerc immediately popped in a 1:17.3, while Vettel could only manage a 1:18.1. Leclerc was reasonably secure with his time, while Vettel was nowhere near the top ten. Coming back to the pits, Ferrari doubled down on the Mediums by sending both back out with a fresh set – meaning Vettel had a huge mountain to climb.

Leclerc didn’t improve on his second run, while Vettel did a 1:17.9. This 0.6 second deficit to Leclerc was huge, and meant Vettel was knocked out down in P15 while Charles progressed onto Q3 where he wound up an excellent P4.

The race was more of the same. Leclerc struggled for grip at the start due to the Mediums, and initially lost positions but, with the Mediums being the better race tyre overall, gradually came back to life and utilised a one-stop strategy to come home in P4. His long first stint briefly looked like he might have been able to challenge Max Verstappen for a podium, due to his much fresher tyres.

Vettel, way down in the midfield, spent most of the race anonymously trundling around but was able to rescue a solitary point by coming home in P10 after Red Bull pulled Alex Albon in for a second pitstop with 20 laps to go.

Ferrari have brought several updates to the SF1000 in recent races, with revised bargeboards, front and rear wing tweaks, as well as a new floor and diffuser brought to Portimao. With so many changes being made, it’s easy to imagine that the Ferraris are running in different specifications but team boss Mattia Binotto says this isn’t the case.

“The machines are absolutely identical, there is no doubt,” he said to Sky Italia. “I hope that Vettel can do a good qualifying at Imola, start further ahead and make more of his indisputable driving ability. Leclerc is certainly very good, but we expect more from a second driver.”

Vettel has been outqualified by Leclerc nine times in a row, and he told Sky Germany: “At the moment it’s beyond me. It’s not just beating, it’s like another league. Well, yeah, I try everything I can.”

“I think the laps I make, which I am content with, are still too slow. At the moment there is nothing more I can do than just getting everything out of myself and the car.”

Vettel has been asked whether he is confident he’s getting the same equipment as Leclerc, considering the extent of the gap and the fact that he is leaving the team at the end of this year.

“I think I have to think we get the same material. I think I trust the team and the people in the garage.” Vettel said. In the end, the stopwatch tells the truth. The feeling for the car is just not right. I find it difficult to drive consistently. Sometimes it goes for one lap, again not. If I don’t hit the window exactly, I’m immediately dramatically slower. It’s like a ride on a razor blade.”

However, Vettel isn’t making excuses for himself as he says it’s clear the car is capable of more: “I just have to adapt. And I’m having a hard time with that. Charles obviously has a different feel for grip than I do, and that’s why I don’t drive as fast as he does.”