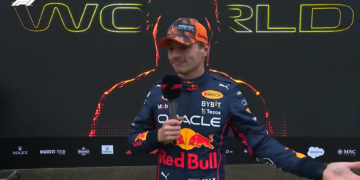 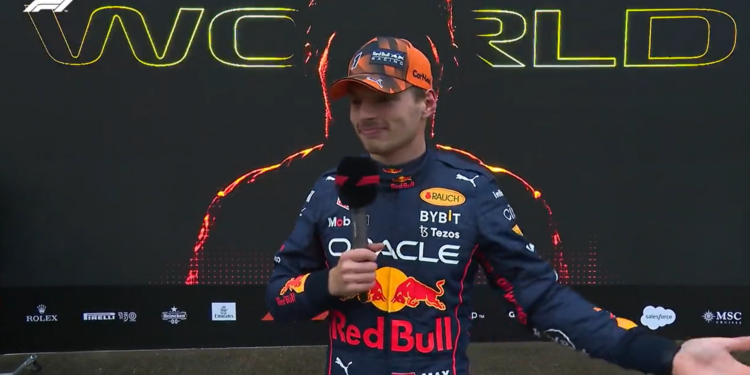 At the final corner, just before the chequered flag, Leclerc went off track and rejoined P2 still ahead of Sergio Perez. The stewards quickly looked at the incident and while the post-race interviews were occurring in the pit lane, the decision to add five seconds to the Ferrari driver’s race time for “leaving the track and gaining an advantage”.

That additional time saw Leclerc being dropped back to P3 behind Perez which saw Johnny Herbert, who was conducting the interviews, call Verstappen back to talk to him and announce to the Dutch driver that he had actually won the championship title.

That caused great confusion to all as, including the teams and drivers, given the race had only made it to just over 50% of the race distance before the allowed time ran out, it was expected that full points wouldn’t be awarded. The issue seems to be that different points being awarded for less than 75% of race distance completed has only ever applied to races which have been suspended and cannot resume.

After the Belgian Grand Prix last year – which saw multiple delays to the race start and eventually just less than three laps completed behind the Safety Car before the race was Red Flagged would not be restarted – the FIA approved a change to how points would be awarded for shortened races.

The new format stated in the FIA’s media release that no points would be awarded if there had not been at least two laps completed under green flag conditions but there was no mention that the new points for different percentages of distance completed only applied to races which were suspended and not resumed.

It appears that as long as a race makes it to the chequered flag full points will be handed out, no matter how many laps were completed or what conditions they were run under – green flag, Virtual Safety Car or Safety Car – and the F1 community was confused about all that because this looks to be the first time a race has been so severely time limited that the chequered flag ended it with less than 75% distance completed.

Even Max had to be convinced! 😃#JapaneseGP #F1 pic.twitter.com/kiJXb283RN

Quotes from Team Principals on Motorsport.com show what the teams view on the issue is and that it’s something that will be requested to be reviewed and revised.

Christian Horner, Red Bull Racing: “I think it’s a mistake that wasn’t included after the issues in Spa last year, that the regulations obviously haven’t been mopped up.

“We were under the strong impression that only with 75% of the race, full points will be scored. So we felt we were going to be one point short.

Andreas Seidl, McLaren: “In the end, how the points were awarded today wasn’t what we all had in mind. That wasn’t the intention from the FIA and the team side.

“But in the end, it seems like we all overlooked this loophole, and therefore we are all responsible for that. It means we must try to do together a better job next time.”

Mattia Binotto, Ferrari: “We were confused, and we thought it would not have been the full awards,” he said. “So initially, our calculations were such that he was not world champion.

“I need to double check with our sporting guys: what was the clear understanding, and what has been the conclusion and the way that it has been written and interpreted compared to the intention.

“It’s a detail, and it’s something we need to clarify as well for the future what is the true intention, what should you do and it’s clear enough. But I’m not too concerned, I’m not too disappointed by it.

“I accept the way the FIA has interpreted it, and let’s review, let’s discuss, but I will not go to any conclusion today on that.”