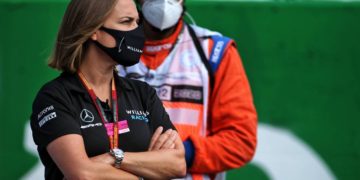 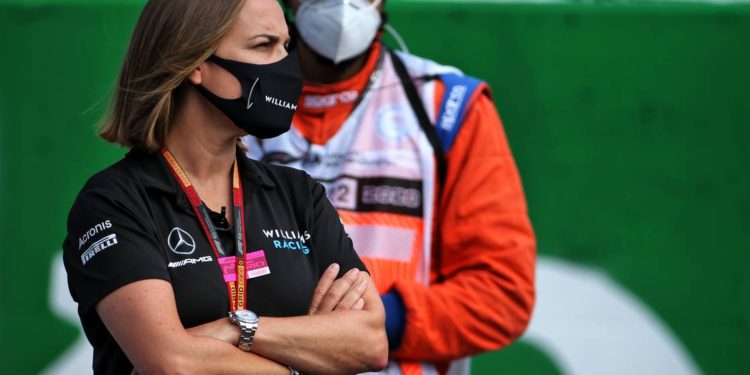 Williams will confirm the person who will take over Claire Williams’ role in the day to day leadership of the team later this week.

Williams head to this weekend’s Tuscan Grand Prix under new leadership, following the buyout of the team by private investment company Dorilton Capital a few weeks ago.

Before the Italian Grand Prix, Deputy Team Principal of seven years, Clare Williams announced that the Monza race would be her last in charge of the team and that the entire Williams family would step away from Formula 1 after more than forty years.

On Friday, Sir Frank Williams resigned from the Board of Directors, along with Claire Williams and Mike O’Driscoll. A new Board has been put together consisting of Dorilton personnel. The new board of directors is made up of Matthew Savage, Chairman of Dorilton, Darren Fultz, co-founder and CEO of Dorilton and James Matthews, a former racing driver and now CEO of investment advisory company Eden Rock.

However, Williams are yet to confirm who will lead the team in the role vacated by Claire Williams in terms of the day to day running. They say that this position will be announced prior to this weekend’s race in Tuscany.

Claire Williams walked out of Monza on Sunday evening for the last time as an F1 team boss, having waved her cars out into the pitlane ahead of the race as a symbolic gesture to mark the end of the Williams’ era.

“It has been my greatest privilege and my biggest honour to work with everybody in our incredible team.” said Claire following the race.

“But more importantly from Frank, myself and everybody in the Williams family I would like to thank all of our team, past and present, for everything they have given to us over the years. They are the true warriors of this team and we wish them all the success in the world for the future.”

Having secured the immediate future of the team in terms of their financial stability, a long-term engine supply deal with Mercedes and signing the Concorde Agreement which keeps the team in F1 until the end of 2025, the Williams family can walk away from the sport with dignity and pride, having made sure their employees were in safe hands as they now look to a more private life.

Having been one of the sport’s most successful teams, Claire thanked all their fans over the years by saying: “We would also like to thank all of our fans around the world who have supported us through thick and thin for so many years. You have humbled us. Our time in this sport has been a huge privilege, we leave with so many memories, we have been through highs and lows, triumph and adversity and will forever love Formula One.”

Nicholas Latifi finished P11 and the highest finisher for the team at Monza and, despite being a fresh recruit for this year after being the team’s third driver in 2019, was emotional on the team radio as he said goodbye to his former bosses.

“It’s been a huge privilege to race for Claire and Frank.” he said. “From the moment I joined the team I felt right at home, and it was very clear the atmosphere and culture they’ve instilled is valued. You can understand why so many of the employees’ love working for them and the team. I’m going to miss them, Formula One is going to miss them, and I want to wish them all the best of luck for the future wherever life takes them.”

George Russell was similarly emotional as he bid farewell to the people who gave him his first drive in F1, saying: “It’s the end of an era and it’s been a privilege to be a part of it. What Claire and Frank have done for the team, and for the people that work for the team, is extraordinary. They’ve always kept them in their hearts and that’s still the case now.”