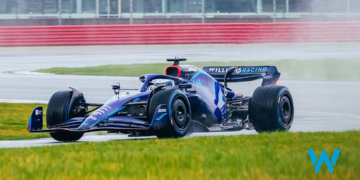 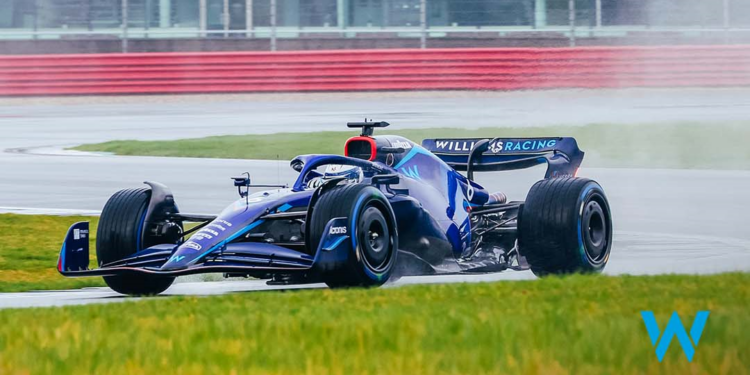 Williams Racing became the latest team to reveal their 2022 car, then later gave the FW44 its debut track run at Silverstone.

In the lunchtime reveal, Williams debuted their new and very blue livery on a show car before hitting the track a few hours later with the real FW44.

Talking about the colour scheme Jost Capito, the Team Principal, said: “The design really reflects our brand definition we re-did last year, especially when you look at the various shades of blue with the diamond scheme we have in the brand as well. The little touch of red is there because we are a proud British team.”

After a few very uncompetitive years, the Williams team had a more positive 2021 with multiple point scoring occasions and even a podium, which saw the team finish 8th in the championship, their first time they weren’t bottom of the table since 2017.

“[2021] was a great season for us,” Capito added. “Especially the step from ‘20 to ‘21 was really great. These results, the points and the podium gave a boost to the entire team not just to the guys who are at the racetrack but also to everybody in the factory. I hope that this boost will show up in the performance of the FW44 this year.”

“It’s more than 40 years now that Williams have been in Formula One, all that experience over the years has come together. We have great talent within the team, now we see what they’ve created.

“The regulations are really new so the whole aerodynamic concept of the car is very, very different and it should allow the cars to drive closer to each other and we will see if that really happens. The theory is one thing and reality has to prove that the theory is right.”

Welcome to the new era. Introducing the FW44 💪 pic.twitter.com/nkOIOYmhpO

Nicholas Latifi has been retained by the team for a third season and, after George Russell’s move to Mercedes, the second seat has been filled by Alex Albon. Albon raced for Toro Rosso and Red Bull during the 2019 and 2020 seasons but wasn’t able to retain his race seat and so spent last year as the Red Bull reserve driver.

“Nicky has to be in the team because we both love Nutella!” Captio joked. “No, Nicky is with us already two years and he deserved the place for the third year, definitely. He showed really great performance, especially at the end of last year when he really got into the rhythm and was very close to George, so we expect quite a lot from Nicky for this year.

“Alex has podiums under his belt, a lot of experience and his character and fighting attitude perfectly fits the team.”

Latifi, who scored his first Formula 1 points last season, is hoping that his familiarity with the team will help him to motivate and develop the new car.

“I’m super excited to be back for the third year with the team,” Latifi said. “Going into a new year, new regulations, new cars, it’s a fresh start for everybody and I think having that experience within the team is going to be really helpful and be crucial to help push everyone, develop the car and get us back into more fighting ways.”

The Canadian is expecting the new car to be more of a physical challenge to drive, but is looking forward to the opportunities that might bring.

“There’s an anticipation of what we’re expecting. I think a lot of drivers are hearing the same things that it’s going to be a bit of a bumpier ride for various reasons, maybe a bit more physical in that sense, maybe more aggressive to drive. I’m very much looking forward to it. If it’s more of a challenge then it’s more of a challenge for everyone and an opportunity for us to try and do a better job.”

Albon meanwhile is looking forward to being back in a cockpit after his year out and for him, not only will the Barcelona test be about getting to grips with the new car, but also about getting himself back used to the strains of driving these cars.

“A year out and you’re itching to get going [again],” said Albon. “It makes you hungry to get back in the seat. For me it was about trying to get as much experience as I could, the year out allowed me to see things from a different perspective. It’s a team that’s really on a climb, Williams, it’s exciting to be part of this new journey and hopefully being able to use a bit of what I know.”

“We are driving completely different cars to previous years so in terms of reliability, but also track time it becomes that much more important to have good running, efficient running. So Barcelona will also be for me getting the neck muscles back up and running but I’m very excited.”