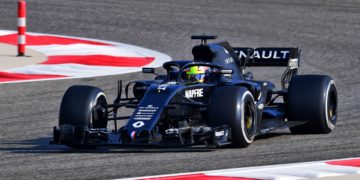 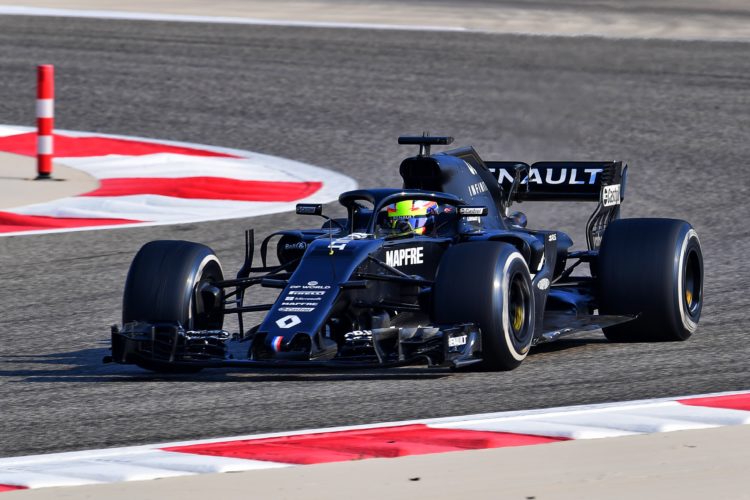 With Formula 1 restricting the testing of the latest machinery, teams have turned to their 2018 cars for running the drivers they wish to gain experience.

Renault headed to the Sakhir Circuit in Bahrain with their 2018 car this weekend, bringing with them their juniors Christian Lundgaard, Oscar Piastri and Guanyu Zhou. All were let loose in the car, with no mileage restriction hanging over them.

The test was to allow all three to gain more experience in the most modern machinery possible, with Zhou and Lundgaard having tested the 2017 car last year. In his role as test driver, Zhou has also driven the R.S.18 earlier this year. For new FIA Formula 3 Champion Oscar Piastri, it was his first time driving an F1 car. Ferrari carried out a very similar test last month at Fiorano with their 2018 car and Academy drivers Mick Schumacher, Callum Ilott & Robert Shwartzman.

Lundgaard was first up, as he drove the car on Thursday. He did 101 laps of the Bahrain track, concentrating on building up pace for qualifying simulations before switching to race runs in the afternoon and evening.

“It was good to be back in a Formula 1 car.” said Lundgaard, who now switches back his focus to Formula 2 for the season closer at the same track. “I’ve never been to the Bahrain race circuit, so jumping into an F1 car on a circuit I’ve never driven brought a really nice challenge. I think it all came to me quickly and I felt comfortable straight away on the first run. We had a couple of issues, but that’s all part of testing, and then we continued with our programme. The whole point of this process is to learn as much as possible. I’m grateful for the opportunity and I certainly enjoyed every second of it. I’m very happy, we got some good running in and I’m quite confident for the Formula 2 race in a few weeks’ time. I’m looking forward to it.”

Oscar Piastri took over the car on Friday, with more time dedicated to him learning how to control an F1 car and adjusting to the higher power, braking ability and G-forces. He carried out different length stints and tried out varying fuel loads throughout his day at the weel. He completed 82 laps in total.

“I really enjoyed the experience in the R.S.18.” said the Australian. “It was my first time in a Formula 1 car, so it was very exciting if not a little bit nerve-wracking at the same time! Once I did the install lap, all the nerves went away, and I focused on having fun and driving fast. It was a really enjoyable experience and I felt the pace was quite good. I got used to the car pretty quickly and I certainly learnt a lot. I’m looking forward to whenever the next experience may be, so thanks to Renault, both the Academy and the Formula 1 team, for the opportunity. I feel very lucky, as not everyone gets to do this and it’s not something you do every day.”

Guanyu Zhou, as the most experienced of the three and closest to stepping up to a Formula 1 seat in the immediate future, had two days of testing as he took over for Saturday and Sunday. However, multiple technical issues prevented him getting much time behind the wheel on Saturday. He had a busy day on Sunday to make up for it and did plenty of qualifying and endurance runs.

“It’s always a privilege to drive a Formula 1 car, so to have this two-day test in Bahrain in the Renault R.S.18 was really beneficial.” said Zhou. “Day 1 was tricky with some issues and we didn’t get so much running complete. Day 2 was much better, and we got through our programme and the things we had to do. There was lots of data to collect, we did race runs and qualifying runs. Each time I’m in the car, I’m straight up to speed and I felt quite comfortable. It’s a challenge getting familiar with all the settings but that’s also quite a fun experience. Testing in Bahrain before the Formula 2 race is definitely useful, so I’m really looking forward to racing there later this month.”

For now, all three will have to wait for their chance to step up to Formula 1. Rather than promote from within for next year, Renault opted to re-hire Fernando Alonso for the next two seasons as the two time Champion wanted to return to F1. This stymied any possibility for Guanyu Zhou stepping up and, with Renault not having any engine customers from next year onwards, it’s hard to see where either Lundgaard or Zhou might get their chance. Oscar Piastri, as the youngest and least experienced of the three as he is a step below on the F1 calendar, has a little bit more time to wait before getting impatient about finding his way into F1.

Renault have been saying for two years that they’d like to bring in their own driver and generate success with home-grown talent, like Ferrari, Mercedes & Red Bull have all managed. Academy Director Mia Sharizman praised all three after their time at the wheel, saying: “To be able to conduct the R.S.18 Test in Bahrain with all the additional organisation arrangement needed due to Covid-19, is a testament to our commitment to the Academy drivers. It was good to see Christian and Guanyu manage to complete their respective programmes, which was geared more towards preparing them for their remaining Formula 2 rounds in Bahrain later in the month. For both drivers to be able to do more than 100 laps per day, shows a step forward and upwards progression from their last year F1 Test in the R.S.17.”

“I am impressed with Oscar’s approach for his first day in the F1 car. He managed to get up to speed pretty quickly and complete his run plan. We can see from his first day in the car that he is capable of adapting to a new car quite easily, which is one of the biggest traits that we would like to see. We had good feedback from the F1 engineers of the performance from all three drivers and they can see that the level is getting higher and higher each year, which is a good sign for things to come.”

Renault will now stay on in Bahrain, with Fernando Alonso taking over the R.S.18 for testing to re-acclimatise to F1 cars ahead of his return to competitive action next season.