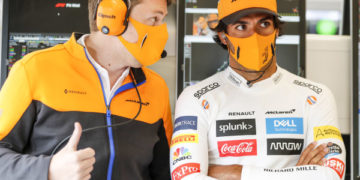 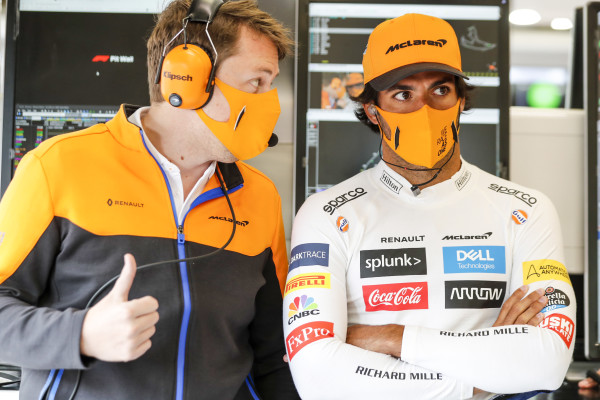 Carlos Sainz’s switch to Ferrari couldn’t be coming at a worse time in his career, as the team are currently going through their worst season in 40 years.

Carlos Sainz had to watch the Belgian Grand Prix as a spectator for the second year in a row, following a technical failure on his car just 30 minutes before the start of the race. Heading out to the grid on his reconnaissance lap, you could see smoke coming from the rear of his MCL35 and he returned to the pits straight away. After a quick lookover from the mechanics, they quickly gave up and it was apparent that he wouldn’t be taking part – with official confirmation coming a few minutes later.

McLaren explained that the issue was actually related to his Renault power unit, which was the replacement unit fitted for the second Silverstone race after cooling issues with the first. The problem resulted in a broken exhaust, meaning Carlos couldn’t take part.

He was very unhappy afterwards, saying: “It was very hard not being able to take the start of the Belgian GP, because today we had a very good opportunity to score a good result from the seventh place of the grid. I smelt something strange in the car during my second lap to the grid and I saw smoke coming out of the exhaust on my rear-view mirrors. The exhaust was broken, but the issue started in the engine. I am not happy, because I have missed one of my favourite races for the second year in a row because of a technical issue. It is not the first one we experience this season, but there is nothing we can do in that situation. We will dig into the issue to try and prevent it from happening again next week, but we haven’t had the season we deserved so far”.

Sainz has had multiple issues this year, with pitstop problems in Styria, Hungary and the second Silverstone race, as well as his late puncture while running P4 at the British Grand Prix. It’s been rotten luck, and his mood will hardly have been lifted by watching the Ferraris performance at Spa. It’s an odd situation to be in, to be surrounded by your current team members and general optimism as they look to the future with Mercedes power next year, knowing that you’re the black sheep about to depart for a team in crisis. It certainly explains some of his tetchiness.

Watching from the sidelines gave Carlos a great chance to watch and analyse Ferrari’s pace, with just ten races to go until he joins the Scuderia on a two year deal alongside Charles Leclerc. Leclerc and Vettel finished in P13 & P14 on genuine pace and, right now, it appears like Sainz is joining at the worst possible time he could in his career. Celebrating his 26th birthday this week, Sainz is entering the prime years of his career and thought he was joining a front-running team that would allow him to fight for wins and maybe even the championship. Instead, he is joining a Ferrari team that are having their worst season in 40 years and genuinely appear to be one of the slowest teams on the grid.

Ross Brawn, Managing Director at F1, says Sainz must be feeling very nervous about leaving the solid and stable McLaren to join the unknown at Ferrari: “This has been a tough year for him, but he’s a pretty positive guy. He’s a very strong character, his career has been no easy ride after all. I’ve always rated him, I think he’s a great driver and he’ll manage this situation.

“But what looked like a dream move to Ferrari next year isn’t looking too good right now and inevitably, he must be nervous about his prospects next season.”

Sainz was seen walking through the paddock at Spa chatting with Ferrari team boss Mattia Binotto, with the inevitable joke being that he’s trying to find a way out of his contract. We have seen driver moves stopped at the last minute in the past, such as Jenson Button signing up with Williams for 2005 while still being under a valid contract with BAR. That resulted in a lengthy court mess that eventually saw Williams paid off to allow Jenson to stay at BAR, but there isn’t a hope that Carlos might be able to back out of his deal to stay with McLaren now that they’ve replaced him with Daniel Ricciardo.

Sainz has acknowledged that Ferrari aren’t looking too sharp right now, and are unlikely to improve much for 2021 with the same car and regulations staying in place, but he says he has faith in the team finding their feet sooner rather than later: “Clearly Ferrari is the first one that is not happy right now. I think you could see clearly how much they struggled. They also had some problems with the overall grip of the car, but in general, I would say that, yes, they need a very big step on the engine coming.”

There’s no doubt that, as it stands, Ferrari don’t have a race winning car, or anywhere close to it. There isn’t a single area where they are performing well: technically or operationally. It’s, at least, 18 months before there is a chance they could find their way to the front with the new regulations. And, looking back, it’s entirely possible that the only way Ferrari have been competitive in recent years was by cheating with their engine. With the same people in place and still responsible for the design path and decisions that have led Ferrari into this black hole, why think that 2022 could be much better?