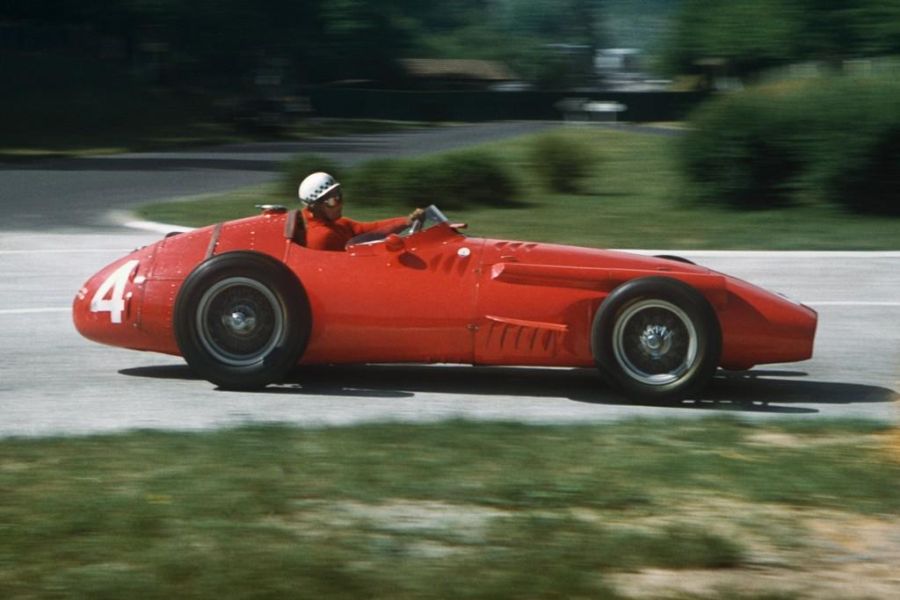 Jean Behra never won a Formula One race, but that statistic does a tremendous disservice to the Frenchman’s abundant talent.

Born in Nice in 1921, Behra was plagued by many horrific crashes throughout his racing career. A more cautious driver may have decided to ply his trade in a safer environment after some of these crashes but Behra, shaking every one of them off, seemed almost completely fearless.

The incident that was to leave its biggest mark on Behra’s life was the one he suffered at the Dundrod TT in Northern Ireland in 1955. Racing in the RAC Tourist Trophy, Jean overturned his Maserati on a banking, resulting in his goggles slicing his ear off. Jean was given a plastic substitute ear by doctors and delighted in displaying a somewhat macabre sense of humour, by occasionally popping his ear off in front of people that were unaware of this physical oddity.

Jean began his motorsport career on two wheels, starting off cycling as a child, before moving onto motorbikes at the age of seventeen. Showing an immediate panache for speed, Behra was to be denied the next few years of racing due to the outbreak of World War II. Resuming his career after the war, Behra began racing for a team called Moto Guzzi,and was to win four French national motorbike titles for them between 1948 and 1951.

At one of his many motorcycling races, Jean drove a Maserati for fun at the Mont Ventoux circuit in 1949, and decided to give car racing a shot, should the opportunity arise. Some opportunities did arise, and Behra piloted a Talbot car to sixth place at Montlhery in 1949. He took part in the Le Mans in 1950, which was a frustrating race as he suffered technical problems and had to retire. Driving a Simca in the Monte Carlo Rally the same year, Jean brought the car home in 3rd place, his first car racing podium.

Between his extremely successful bike racing career, and noticeable car appearances, Jean had come to the attention of a man called Amedee Gordini. Gordini ran the Simca-Gordini Formula 2 team, and signed Behra alongside fellow French drivers Maurice Trintignant, Andre Simon & Robert Manzon. Unfortunately for Behra, the team’s cars were underwhelming on the performance front, and unreliable to boot. However, he was able to show his mettle at the 1952 Reims Grand Prix, otherwise known as the Grand Prix de la Marne. Despite holding off the Ferrari F1 works team, this was not a Formula 1 event, so he could not yet be considered an F1 winner.

Jean Behra (Number 4) in his Simca-Gordini, holding off the Ferrari of Piero Taruffi, at the 1952 French GP.

In 1953, Jean was to suffer back injuries at the Pau circuit, again in a non-F1 event. It wasn’t unusual at the time for F1 drivers to take part in other championship events, and it really is a testament to Jean’s love of racing that he would enter as many races as he could. The crash ruled him out of racing until 1954, where he continued with Gordini. He was to win at Pau, Montlhery & Cadours, but, again, outside of the official championship.

Finally frustrated of the Gordini efforts, Behra was to jump ship to drive for Maserati in 1955. While undoubtedly a step up, Behra was to be taking on the Mercedes works team of stronger opposition such as Juan Manuel Fangio & Stirling Moss. He won the non championship event at Pau again, but went winless in F1. It was frustration all round for Behra over the following years. In 1956, Stirling Moss left Mercedes and ended up at Maserati, where Stirling won the Monaco & Italian GPs. Showing that his lack of success in Formula 1 wasn’t related to his level of talent, Behra won the Nurburgring and Paris 1000km sportscar events, as well as the Cortemaggiori sportscar race at Monza sharing a car with Luigi Musso.

Driving a Maserati at the Grand Prix of Rome in 1956, he also set an average speed record of 174 km/h around the circuit. At this point, there was no questioning Jean’s immense bravery as he recovered from yet another crash. This time, it was at the Mille Miglia in 1957, but Jean was to recover and win two more events in 1957, at the Swedish & Italian rounds, as well as winning the non-F1 Pau Grand Prix yet again.

A superstitious man may have thought that his numerous crashes were tempting fate, but Jean was not one to allow bad luck to play on his mind, which was perhaps for the best. Moving to the British BRM team for 1958, he immediately suffered a very bad crash in his very first race for the team. Racing at Goodwood, the brakes on his car failed, resulting in Behra colliding heavily with a brick chicane. Other incidents served to unsettle Behra, such as brake failure again on his BRM at the Aintree Grand Prix. Jean escaped injury when his goggles got smashed at Silverstone. F1 was not treating the Frenchman particularly well, but he was faring better in sportscar racing, winning at the Nurburgring, Avus, Reims & Mont Ventoux.

Jean was to get his big opportunity in 1959, when he was signed by the Ferrari team. Driving alongside team-mate Tony Brooks, Behra won at Aintree but, unbelievably, this was still a non championship event. The final straw in F1 came at the French Grand Prix at Reims. Behra had been running in third place, when his engine threw a piston, and he was out of the race. Following this, Jean was to get into an argument with his team boss Romolo Tavoni in a restauraunt. As the argument grew more heated, Behra threw a punch at his boss as well as at another restaurant patron, and Jean was dismissed from the team.

For Behra, this was a mixed blessing, as he now had time to concentrate on his own project, which was a Formula 2 car, as well as driving a Porsche RSK at sportscar events. The first of these events was at the Avus circuit near Berlin, only three weeks after his dismissal from the Ferrari team.

Avus was a circuit of insanity, even for those less safety-conscious days. It featured two 5 miles blasts along public roads which were to become part of the Autobahn freeway systems, linked by two corners. One was a slow, tight hairpin, while the other was a monstrous banked, flat out curve, which featured a 43 degree banking. This is twelve degrees steeper than that at Daytona Internation Speedway. Speeds averaged around 260-270 km/h, and it was here that Jean brought his Porsche to race on a day that saw heavy rain, and a wet and slippery track surface.

Jean passed Jack Brabham at around 110mph entering the banking, when the back of his Porsche stepped out. Attempting to correct the slide, Jean started to fishtail around in ever increasing angles, while also climbing higher and higher up the enbankment. Finally, the Porsche reached the top of the banking and was thrown off into the air. It landed heavily on it’s side at the top of the banking, where it remained resting as the race continued.

Unfortunately for Jean, he had been thrown clear of the car as it destroyed itself. While being catapulted through the air, he collided with a flagpole – one of eight flagpoles that lined the enbankment. With no barriers between the track and the flagpoles, Jean struck the pole like a ragdoll, and died instantly of massive head injuries. He also broke most of his ribs in the collision.

Jean’s funeral took place six days later in Nice, an event that saw 3000 mourners line the streets of his hometown. F1 never treated Jean as well as his talent deserved, and a final insult was delivered on his final day. While the racing community turned out to pay their respects to Behra, a notable absentee was Enzo Ferrari. He had fired Jean only a few days prior to his fatal accident, and never acknowledged the death of his former driver, nor sent any form of remembrance to the funeral.