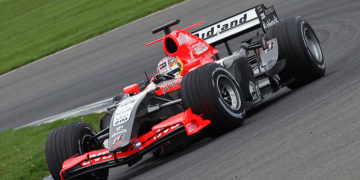 On this day in F1 History… February 3rd:

On this day in F1 History… February 3rd: 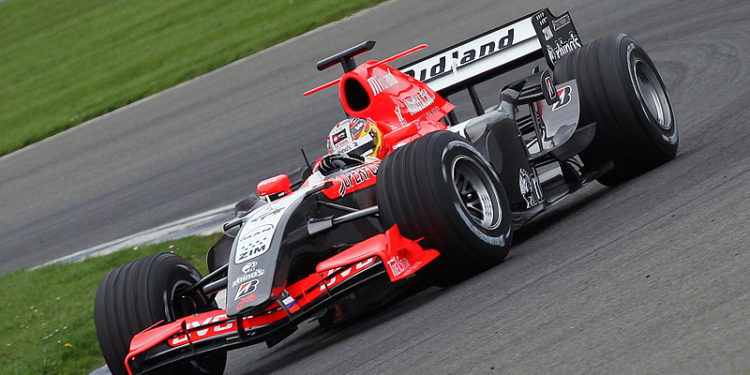 Following the 2005 sale of Jordan Grand Prix to the Midland Group, 2006 saw the team being officially rebranded as ‘Midland F1’ and the launch of their singular racecar, the Midland M16.

Powered by a Toyota engine and with an attractive red, white and black livery chosen to mirror the corporate colours of the Midland Group, their first and only season in F1 was quite a mixed bag.

Despite an initially poor start, as the 2006 season progressed, drivers Christijan Albers and Tiago Monteiro regularly managed to make their way from the back of the grid to midfield, where they jostled for position with teams such as Red Bull Racing and Scuderia Toro Rosso. Sadly, these heated battles rarely translated into strong finishes, and a series of first-lap accidents in Monaco, Indianapolis and Montreal further hindered the team’s overall performance.

The team was sold mid-season to Spyker Cars, leading to a livery redesign for their final three appearances. Although changing the name of a team that late in the season is usually not permitted, Spyker found a clever way to circumvent this issue by declaring themselves as the team’s title sponsor. In doing so, the team were officially able to rename themselves ‘Spyker MF1 Racing’ and race under this title for the remainder of the season.

Driver retirements at 11 out of 18 races, plus an additional disqualification from the German Grand Prix for flouting technical regulations, saw the team finish 10th overall in the Constructors Championship, just ahead of Super Aguri. They concluded the 2006 season having gained 0 points, and with a best qualifying position of P14.

The team has changed ownership and been renamed many times since then; from 2007 onward, they were known simply as ‘Spyker F1’. They were again sold in 2008 and competed as ‘Force India’ until 2018, at which point the team was bought by Canadian businessman Lawrence Stroll and rebranded as ‘Racing Point’.

The team’s most recent incarnation is, of course, as Aston Martin Cognizant Formula One Team and they will compete under this title in the coming 2021 season.