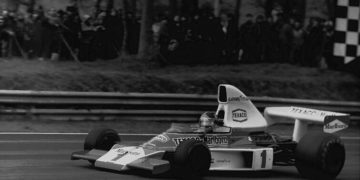 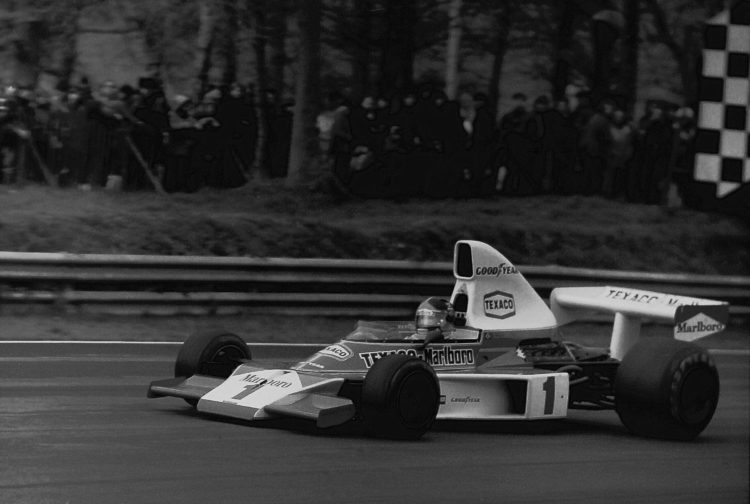 "File:Emerson Fittipaldi 1975 Race of Champions.jpg" by Martin Lee is licensed under CC BY-SA 2.0

Driving the McLaren M23, Fittipaldi beat his closest competitor, James Hunt, by a six second interval after an unfortunate spin of Hunt’s Hesketh enabled the Brazilian to take the lead. Not deterred for long, Hunt recovered his composure and went on to finish the race in second place, with the Agentinian Reutemann coming in third – much to the delight of the home crowd.

Wilson Fittipaldi Jr, on the other hand, did not have quite as successful an outing as his brother; after a fiery crash on lap 13 forced him to retire from the race.

The Fittipaldi name has once more found its way back into Formula 1 thanks to Emerson’s grandson, Pietro Fittipaldi, who made his debut for Haas last season at the 2020 Sakhir Grand Prix, replacing an injured Romain Grosjean in what would have been his final race for the Haas F1 team.

Ferrari veteran and four time Le Mans winner Olivier Gendebien, born 12th January 1924 in Brussels, Belgium. Gendebien began his illustrious Motorsports career as a Rally Driver, teaming up with fellow Belgian Paul Fraikin to compete in the 1952 Liège–Rome–Liège Rally. This partnership was a relatively successful one, with the two men achieving many second place finishes together, however P1 continued to elude them. This earned the pair the rather humorous nickname of “the eternal bridesmaids”.

Their perseverance eventually paid off in 1955 when that year they not only won the Liège–Rome–Liège Rally, but also the Coppa d’Oro delle Dolomiti and Rally Stella Alpina, driving a Mercedes-Benz 300SL.

On the back of his success as a rally driver, Gendebien was offered a contract to drive for Ferrari in sports car events and in selected Grand Prix. He made his Formula 1 debut for the team at the 1956 Argentine Grand Prix, competing for them in a total of 15 races altogether. The remainder of the time, he acted as their spare driver, filling in as needed. This affiliation with the Ferrari team would last until his retirement from professional racing in 1962.

Alan Rees, former Formula 2 race car driver and Shadow team principal, was born on 12 January 1938 in Newport, Wales. He competed in three Formula 1 World Championship races in the 1966/1967 seasons, with his best result being a P7 finish in the 1967 German Grand Prix. Following his tenure as team principal for Shadow Racing Cars, he co-founded the Arrows Grand Prix International Formula 1 team alongside fellow racing driver Jackie Olivier and several former Shadow employees. The team was active in Formula 1 from 1978 until 2002, briefly having changed its name to ‘Footwork’ for a short period during the early nineties. Rees and the other founders officially sold their interests in the team in 1996.

Lloyd Ruby (12th January 1928) was an American racecar driver from Wichita Falls, Texas. He is best known for his 20-year stint in the USAC Championship Car series, as well a successful career in endurance racing. Some of his more notable victories include winning the 24 Hours of Daytona twice, as well as taking first place in both the 1966 12 Hours of Sebring race and the 1966 World Sportscar Championship.

Ruby has but a single Formula 1 appearance to his name, driving for Team Lotus in the 1961 United States Grand Prix. Having come in last during qualifying, Ruby started the race in P19 and retired after 76 laps out of 100. He died in 2009 at the age of 81.