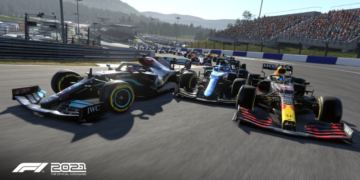 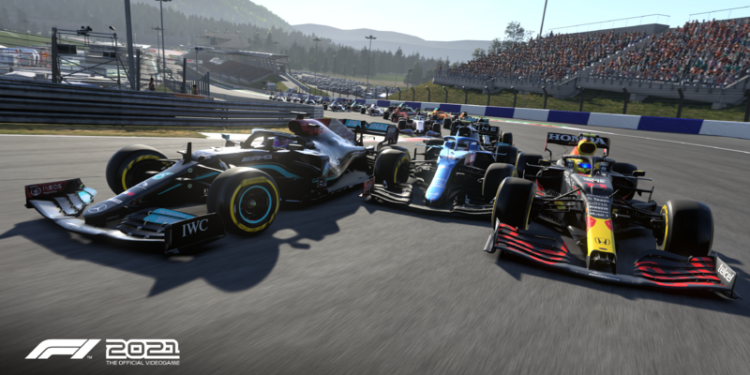 The latest iteration of Formula 1’s officially licensed video game, F1 2021, is imminently due to be released this summer. With new regulations, new teams, and new circuits, how does the new game stack up against previous releases.

Back in 2020, Codemasters was bought by video game giants Electronic Arts to bolster the US-based firms’ already impressive portfolio of officially licensed sports titles, biggest of which is FIFA.

Whilst development of 2021 was well underway when the studio was purchased, you can start to see some small influences in the games crisp and clean presentation coupled with new, fluctuating driver stats.

After downloading the hefty 70 plus gigabyte download, and booting up for the first time, you’re greeted with a popup kindly reminding you to keep updating the game. Codemasters will be releasing new circuits periodically throughout the games’ lifecycle and this ties in with the very fluid season Formula 1 finds itself during this unprecedented pandemic.

This is the 13th title from Codemasters and is the most polished and crisp product the Southam-based studio’s products to date. With clean user interface and re-shuffled menus, it has the ability to draw in fans new and old.

The newest feature to the games arsenal is the new Braking Point story mode. You play as young rookie driver Aiden Jackson as he works his way up through the ranks of Formula 2’s 2019 season, through to F1 in 2020 and 2021.

Game Director Lee Mather revealed to FormulaSpy and other media that this is a game mode that Codemasters have wanted to try for a long time. It’s hard not to draw comparisons to FIFA’s The Journey story mode, but the characters are quite engaging if not a little cartoonish and dramatic.

The story focuses on Aiden Jackson and brings back antagonist Devon Butler from F1 2019. The game introduces a new driver Casper Ackerman as your teammate. Ackerman is an experienced old hand in F1 and someone Jackson looks up to. You will navigate your way through the ups and downs of this relationship with your team boss Brian Doyle.

Without revealing too much about the story, you’re dropped into different scenarios that play out and will need to hit targets or perform certain actions. Sometimes the action is broken up with a cutscene that will change the nature of your race.

The story feels heavily inspired by Netflix’s Drive to Survive series in terms of dramatic presentation, however the cutscenes look stunning with driver models reworked and a cinematic filter placed over the action.

Seasoned F1 gamers will probably finish this in around six to eight hours – with three levels of difficulty the replay value here is fairly limited, but nevertheless it’s a solid attempt at a story mode that Codemasters will surely look to build upon.

Get ready for some spins

The nuts and bolts of any Formula 1 game is how it drives. Codemasters have liaised with actual drivers a lot more for this game, and, with new regulations for 2021, downforce at the rear of the cars was stripped away. The Devs have taken this on board, and the car does feel somewhat loose, but you can still comfortably power your way out of a corner.

There are new driving modes ranging from casual to experienced and each mode feels like a natural step as you learn the game. Experienced strips away most of the aids and makes the driving more of a challenge. You can add assists in, such as traction control and braking assist, but the actual driving requires finesse and something that will come with experience.

Oversteer is often paired with a trip out onto the kerbs where grip has been reduced, or rather, made more realistic. If you put on too much power whilst riding a kerb, you will spin. Conversely, in the wet, I felt more than comfortable stamping on the power on the exit of corners.

Understeer is less predictable – sometimes I would take a corner flat out, others I would find it hard to keep the same line. Whether there are forces at play here with track or tyre conditions is unknown, but this game will keep you on your toes.

The AI are far more aggressive than anything we’ve seen before. The drivers will defend their position with much more impetus than previous games, whilst they will try to stick their nose in if they see a gap. The AI are prone to mistakes too – when defending against two faster drivers, both tried moves on me, one around the outside and one up the inside. The driver on the inside missed his braking point and slammed into the driver on the outside.

The game is visually stunning and the best Codemasters have made to date and on the next-gen consoles, it is staggeringly beautiful. The tarmac looks weathered and evolves as the race goes on, whilst the cars themselves glean under the various lighting methods at play. Bahrain and Singapore look particularly stunning.

Tyre puncture models have been reworked for 2021; now they flail on the wheel a lot more convincingly. Whilst wet weather is the best the franchise has seen to date.

The damage model has been updated significantly. As well as the usual front wing damage, you can now break other parts of your car including rear wing, bargeboards, and floor. The loss of downforce, whilst not feeling significant, does have a handling effect. A front wing can be replaced, however other components have to remain like that until chequered flag.

F1 2021’s single player experience includes the now well-established career mode has been refined further, with no major tweaks. There are a few new additions however.

Real season start lets you drop into an F1 season after downloading the results of the actual F1 championship so far, whilst a plethora of ex-F1 drivers have been added for inclusion into your ‘My Team’, including Michael Schumacher, Ayrton Senna, Alain Prost, Jenson Button, Nico Rosberg, David Coulthard, and Felipe Massa.

Drivers have new stats – very similar to FIFA’s player stats. Each F1 driver has been given a rating based on attributes such as awareness and pace, coupled with a new stat called focus. This stat is reflects a current drivers form and the game will constantly update based on how they’re performing on-track in the real world.

For car development, I could easily take my team to the top three within a season or two in previous games, whereas in 2021, it felt much more organic. You can set what budget your team has, and how well the other teams accrue updates. F1 2021 feels like much more of a customisable game with Safety Car frequency and component failure all customisable.

The podium pass and in-game currency ‘pitcoin’ makes a return for 2021. You can unlock new items for your driver including podium celebrations, radio victory celebrations, and various items of clothing and helmet design.

Whilst the game is huge and will keep you invested for any months to come, F1’s classic cars feel oddly absent from the game. The cars from Formula 1’s past were a popular feature in the games and their non-inclusion feels a bit of a let-down. F2 is still there with the 2020 field, however the 2021 grid will be coming later in an update.

Online and racing with your friends

The game hasn’t made too many changes to online. There are new options on how you can choose to race, such as selecting shorter races, or a different experience level. If you are more of a hardcore racer, you can group yourself with people of a similar ability. Whereas if you have the need for speed and a bit of fun, there’s a choice for that too.

In conclusion, F1 2021 is a very customisable and real experience. The game is the most polished product in the franchise to date and is a must-buy for any F1 fan. With EA Sports influence teased in the presentation, as well as improved staple features, the game will keep you heavily invested until F1 2022 comes out.