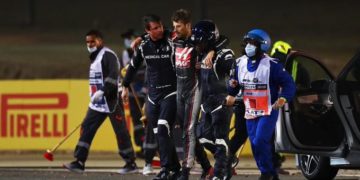 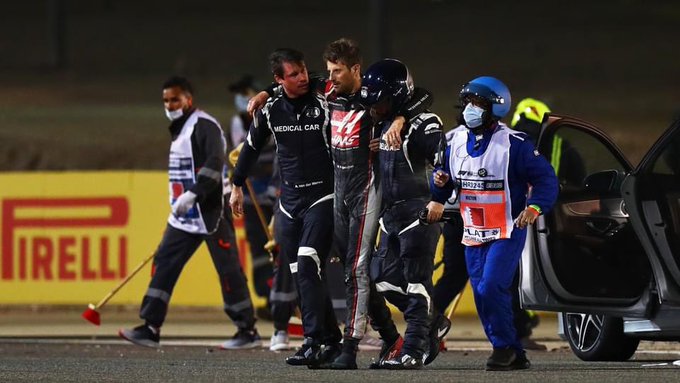 Bahrain Grand Prix – Romain Grosjean limped away from his monumental Bahrain crash thankful for a little bit of luck, and a whole lot of engineering excellence.

“On Twitter, late, I mentioned the useful words, the urgent words, to protect them, above all.” Marion Grosjean wrote about her children on Monday. “I evoked the “love shield” that had protected him. Today we will have to find other formulas, invent other sensible phrases to express feelings. We will find them together.”

Marion Grosjean could have been a widow today, with ‘together’ no longer possible. Her children without a father. They, along with the rest of the world, could have been mourning the loss of a tremendous sportsman, a doting father and all round good guy – cut down in the prime of his life in an accident of unimaginable violence.

Let there be no doubt about that. Had Romain Grosjean crashed his Haas in the exact same way during the 2017 Bahrain Grand Prix, he would now be dead. His boss Guenther Steiner says ‘an angel was looking over F1’ on Sunday. The spontaneous applause that broke out up and down the pitlane when the replays finally were shown and indicated an averted disaster signalled the floodgates of relief being thrown wide open. Formula 1 rejoiced in coming face to face with death once again and, this time, successfully warding it away.

F1 witnessed a miracle on Sunday, with Grosjean somehow managing to escape his fireball racecar within seconds of the car going up in flames. This was after his front half of his car punched straight through a steel Armco barrier lining the track, and splitting his car completely in two. With the back half thrown aside on the circuit side of the barrier, Grosjean’s survival cell remained intact as it underwent a 53G crash that pierced through solid metal. It’s a huge force to put through a human body over a miniscule distance, as his cell came to an abrupt halt from 221kph down to zero in a distance shorter than its own length.

Like in any major crash, luck has played a significant role in ensuring Romain Grosjean was able to remain conscious, free himself, climb out from the cockpit despite the barrier obstructing his exit overhead, and be largely unhurt despite being caught in the flames of his car for some 20 seconds.

But playing a much bigger role was the never-ending push for increased safety and eradication of weak spots. The modern FIA has been one of progress, always pushing ever higher standards for equipment homologation. The Halo has been the biggest step forward in the past decade, brought in after a few years of research by the FIA under the watchful eye of Charlie Whiting. Following the death of Henry Surtees at Brands Hatch in 2009, followed by Felipe Massa’s head injuries at the Hungaroring shortly after, the FIA began looking into ways to create head protection for the drivers without enclosing them completely and taking away from F1’s open cockpit ethos.

This work was hastened after the tragic accident that befell Jules Bianchi at Suzuka in 2014, eventually claiming his life as the Frenchman never regained consciousness over the intervening nine months between his accident and death. IndyCar also began looking at options when Justin Wilson lost his life at Pocono Raceway just a month after Bianchi’s passing. The FIA started testing options, with an early Halo going through practical testing, as well as a ‘Shield’ and an ‘Aeroscreen’.

Of course, there was backlash against it. Fans decried it as ‘ugly’, the drivers bemoaned it as unnecessary and, when the FIA announced the Halo would be mandatory from 2018 onwards, it set off the usual cries of ‘never watching F1 again’ that any sort of change results in. One of the biggest detractors was Romain Grosjean who, in his role as head of the Grand Prix Driver’s Association, said: “I’ve made myself clear from the beginning on this – we don’t need anything for this. I’m against all of them, the Halo, the Shield, whatever, it’s just not F1. The Shield is just as bad as Halo.”

Undeterred, the FIA pushed through with it. Introduced in 2018, the Halo became part of the integral design of the cars rather than an add-on and, after a short period of adjustment, became invisible. To the extent where watching an F1 race pre-2018 makes the drivers heads look incredibly vulnerable, and the cars naked. There’s been a few incidents where the Halo has prevented injury, most notably at the start of the 2018 Belgian Grand Prix when Charles Leclerc collided with Fernando Alonso. That crash could have had serious implications without Halo, but wasn’t as clearcut as Grosjean’s.

The Halo has now definitively saved a life. The imprint of the Halo where it penetrated through the barrier makes it abundantly clear that, without it, Grosjean’s helmet would have taken that same impact. The force was sufficient to peel away the carbon fibre from the titanium framework. Had the Halo not been there, Grosjean would have died in similar fashion to Francois Cevert in 1973 at Watkins Glen, or Helmut Koinigg in 1974.

Along with the work to improve car safety with the introduction of the Halo, the FIA also introduced stringent new fire tests for the clothing Grosjean was wearing. These standards were announced in 2018, and introduced for 2020. The new standards forced race suit manufacturers to ensure complete flame resistance at a temperature of 250 degrees for a minimum of 12 seconds. The undergarments, balaclava and gloves have been given a minimum figure of 5 seconds, meaning Grosjean had around 20 seconds to escape without injury. This is almost double the time that was required under the FIA’s old standard of just 12 months ago. His escape took marginally longer than 20 seconds, explaining why he picked some minor burns to his hands.

There was, of course, plenty of luck involved too. While engineering protected him through the crash and ensured he remained conscious, he was lucky that his steering wheel seems to have been removed at some point in the crash. Whether he removed it automatically by instinct and can’t remember or the wheel sheared off in the impact is yet to be explained. This gained him a few precious seconds. Climbing out, he found the barrier had folded over the cockpit and had to wiggle out using half the available width the Halo provides. Again, luck that he wasn’t trapped completely. Conscious and free of the cockpit, his opaque visor melted and he had to feel for the barrier where he jumped into the waiting arms of the Medical Crew, who were fighting the fire valiantly along with Bahraini track officials.

A heart-stopping moment on Lap 1 in Bahrain

The collective knowledge of more than 70 years of Formula 1, along with the 52 driver fatalities in those years, gave Grosjean and the rescue crews the opportunity and equipment needed to survive his crash. The death of compatriot Jules Bianchi hastened the introduction of the Halo that saved Grosjean, who acknowledged his opinion of it was simply wrong: “I wasn’t for the Halo some years ago but I think it’s the greatest thing we’ve brought to Formula 1 – without it, I wouldn’t be able to speak to you today.”

There are many positives to take from Grosjean’s crash. It was a unique set of circumstances, but another crash in the same race highlighted another weakness. One that, annoyingly, has been brought about by the introduction of the Halo. Lance Stroll, flipped over in his Racing Point when the race restarted, found it quite difficult to wriggle free of his car from underneath. The Halo simply got in the way. If Grosjean’s car had been flipped upside down in his crash while on fire, the outcome of it would not be as favourable as it has been.

Without the benefit of the FIA’s resources to analyse how to improve this weakness, a simple suggestion could be just to increase the amount of fire tenders dotted around the circuit. Another could be to increase the variety of fire extinguishers, and their sizes, as Grosjean’s footage showed a big discrepancy between the effectiveness of the difference extinguishers used by the different personnel.

For now, let’s be thankful that the Grosjean family are able to reunite without consequences. With Romain’s F1 career almost over, he can reflect on the fact that his life was saved by the efforts and research of the late Professor Sid Watkins, the late Charlie Whiting, Bernie Ecclestone, and the FIA organisation as a whole. For the FIA, it’s a small victory but one that shouldn’t trigger complacency. Hard work has been done, but it’s only getting started.