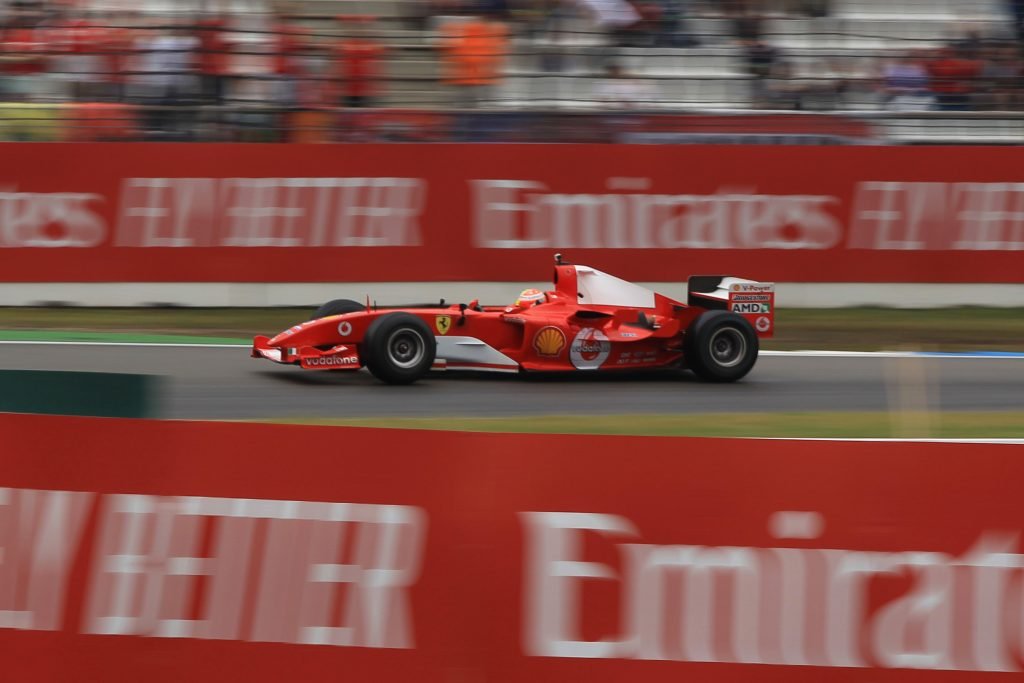 Michael Schumacher’s early 2000s dominance of Formula 1 was almost tangible again in 2019, as his son Mick took the wheel of the 2004 Ferrari at Hockenheim.


At one point in time, not that long ago, it was just an assumed given that Michael Schumacher and Ferrari would win any given Grand Prix they entered. Some, more recent, fans of Formula 1 might not be familiar with the extent of Michael’s dominance. Such was Michael’s incredible win rate, those of us who experienced it have been left with a rather curious auditory earworm. Namely, hearing the German national anthem end means automatically mentally hearing the opening notes of Il Canto degli Italiani. Without fail.

From the mid-90s until the mid 00s, for Germany, Michael Schumacher was God. And Hockenheim was Germany’s place of worship for him. Every year, the Germans would turn out in their thousands and fill the stadium section. Using their klaxon horns, they would create an intimidating wall of noise that the drivers would hit as they blasted their way into the stadium from the relative calm of the forest straights. So loud and intimidating were they, that the horns and crowds could even drown out the V10s….

2004 was the peak of the Schumacher dominance. Having already wrapped up the title by the French Grand Prix two races prior, Michael came home as a seven time World Champion and promptly ran away with his home race after some very brief early pressure from the McLaren of Kimi Raikkonen. With 13 wins over the course of the year, Germany was just one of many victories in 2004 but it added to the sense that Michael was, simply, infallible.

The F2004 played a huge role in that. Ferrari’s 2004 offering has become one of the most iconic cars of the sport, winning 15 of the 18 races that year. It was a ballistic missile of a car, full of barely contained bristling fury, and Schumacher tamed it in a way that hadn’t been seen since Ayrton Senna at McLaren.

15 years after that day, and Michael’s legend remains undiminished. Sadly, he hasn’t been seen in public since his skiing accident in early 2014, and his health status remains unknown. The Schumacher family don’t shy away from the public eye, but they maintain a dignified silence that befits Michael’s character.

Michael’s son Mick seems to be a chip off the old block. Almost frighteningly similar looking to his father, he has the same piercing, intense, eyes of his father. The same charming professionalism with the media, and a sense that he has been well prepared by his parents and Michael’s long-time management camp to deal with the pressure of racing as the son of the most successful driver in the world. Mick, following his win in Euro F3 in 2018, stepped up to Formula 2 with Prema this season. Ferrari have also signed him to their Driver Academy, and he has tested the 2019 car at the in-season test in Bahrain earlier this year. While he is having a difficult start to his F2 season, he has still shown flashes of magic on occasion – his best finish so far is P4 at the Red Bull Ring.

Mick was given the keys to Michael’s F2004 in Hockenheim – Ferrari and a private owner supplying two F2004s for display and use at two separate demonstrations over the course of the weekend. Paying tribute to his dad, Mick used a unique helmet design. On the right hand side, he used his own 2019 design with Michael’s iconic helmet livery on the left.

Firing up the V10 engined Ferrari on Saturday morning after FP3, the 15 intervening years since it last completed a lap of Hockenheim as Michael completed his cooldown after winning in 2004 just ebbed away as Mick drove it out onto the circuit.

Completing a handful of laps as he waved to the grandstands, the crowds showed their appreciation by cheering as the F2004 drove past and clapped as Mick climbed out on the start finish line – as much an acknowledgement of the absent hero’s achievements and near-presence as it was for the gesture from Formula 1.

“It’s amazing,” Mick told Formula 1 afterwards. “So much power, so much energy, so many feelings and emotions. It was amazing.”

A second run was to follow on Sunday morning, with Mick taking the F2004 around in the conditions that Michael thrived and earned his moniker of Regenmeister in.

“It was great,” Schumacher told RaceFans.net. “It was amazing to be able to drive the car around here. It was my dad’s seat and everything and it fit perfectly so that was even, on top, greater.”

“[From] going out of the pit lane [to] coming into the pit lane, I never lost a smile,” he said. “It was always on my face the whole time. Even when I was locking up I was smiling! It was really cool.”

For a brief moment, the hot, sun-soaked summer of Schumacher dominance in 2004 was almost close enough to touch again. And it was magic. Keep fighting Michael.