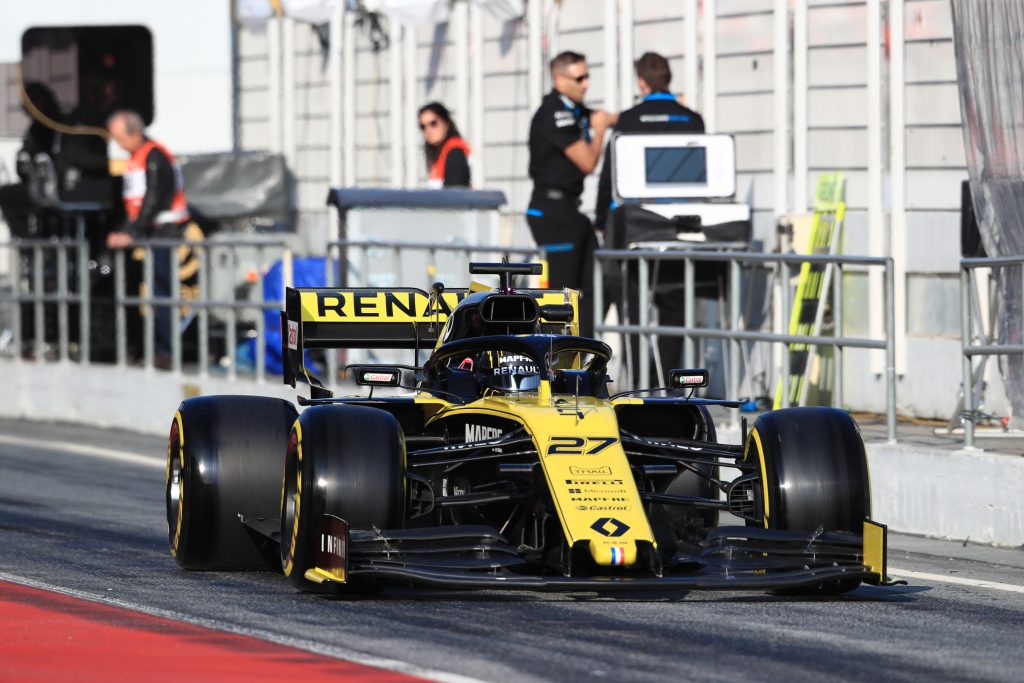 Renault finished off the final day of the first test by taking the first and third spots on the timesheets. Nico Hulkenberg finished P1 with a late afternoon flyer on the softest C5 tyre.

There were a few changes to the driver line-up following the morning session, which ended with Toro Rosso’s Alex Albon as the quickest man after a 1:17.637 on the C5 tyre.

Lewis Hamilton stepped out of the Mercedes W10 in order to hand over to Valtteri Bottas, Romain Grosjean gave his Haas to Kevin Magnussen, George Russell took over Williams’ duties and Nico Hulkenberg was at the wheel of the Renault after a strong morning for Daniel Ricciardo.

It was Nico Hulkenberg who finished the day with the quickest time of the day. After a steady first half of the afternoon on the C3 mid-range compound, the German driver went out for a flyer on the softest C5 compound and promptly stuck in a 1:17.393 to set the fastest time of the test overall.

This was around quarter of a second clear of Albon’s morning time but Hulkenberg’s day fell apart shortly after as he broke down on track. Coming around the final sector, he was told to shut down the RS19 and did so at the approach to the final chicane. There was a brief red flag period needed to bring him and the car back to the pits.

Albon’s focus in the afternoon was on mileage, putting up 136 laps in total, not improving on his earlier time. He stayed P2 on the timesheets right up until the end of the day. His time was just a single tenth ahead of Daniel Ricciardo. The Australian may not have been taking part in the afternoon, but his morning laptime of 1:17.785 kept him P3 with a total of 34 laps completed.

The two Mercedes drivers were up next, with Valtteri Bottas ahead of Hamilton. Bottas’ 1:17.857 was set on the C4 tyre, the second softest compound, while Hamilton put in a 1:17.977 on the same compound.

Ferrari had a quiet day, by their testing standards so far this week. Charles Leclerc pounded around Catalunya 146 times and put in a best time of 1:18.046 on the C3 tyre. This was four tenths clear of Lando Norris, who left it until the last ten minutes to put in a 1:18.4 on the C4 tyre and go P6.

A tenth further behind him was Antonio Giovinazzi’s Alfa Romeo, who did a 1:18.5 on the C3 tyre. He, like Charles, put in immense mileage to do 151 laps before bringing out the red flag with six minutes of track time remaining for the day. Coming back out a few minutes later, the Alfa broke down again. This effectively ended the session as the clock hit 6pm during the stoppage.

Pierre Gasly was P11 for Red Bull Racing on another quiet day for the British team. He put in a best time of 1:18.780 on the C3 tyres and went around 146 times.

The two Williams drivers finally got a chance to drive their FW42 properly. Robert Kubica drove the morning session and finished P14. He completed 48 laps on the C2, while George Russell did a more aggressive afternoon test program that saw him complete 17 laps and a fastest time of 1:20.997.