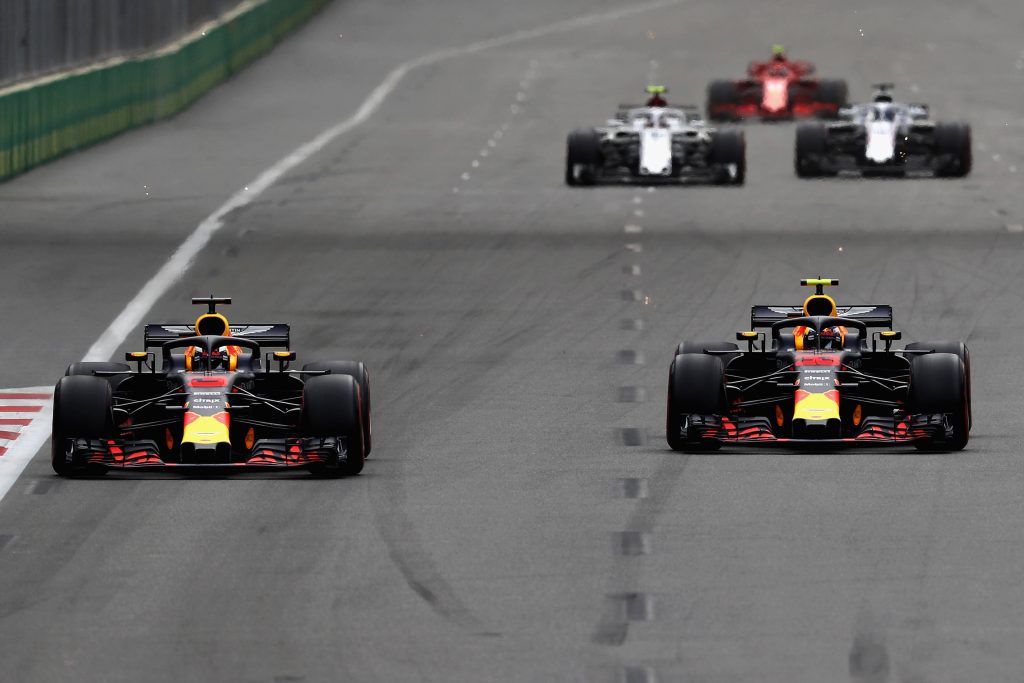 Reaction: Should Verstappen be benched for a round?

Reaction: Should Verstappen be benched for a round?

Azerbaijan Grand Prix – After another calamitous race for Max Verstappen and Red Bull Racing, is it time for the team to intervene with their young star?

Let’s get one thing out of the way straight away before I get annihilated by the many Max fans out there: I don’t think he was completely to blame for the collision that took both himself and Daniel Ricciardo out of the race in Baku on Sunday. Mostly to blame, yes, but not completely. It was the latest in an ever growing list of incidents that have marred the start of the Dutch driver’s third complete season in Formula 1. And that is the crux of the issue really – it’s the start of his fourth full season, with a handful of races to garnish on top of that from 2015. By this point in their careers, established colleagues like Ferrari’s Sebastian Vettel was embarking on what would become his first World Championship. Lewis Hamilton was a defending World Champion. Kimi Raikkonen was leading the post-Mika Hakkinen McLaren team to championship challenges, while Fernando Alonso was vying with Michael Schumacher for the title.

By this point, these established Champions had gotten their wild streaks out of the way, if they even had one to begin with. Max Verstappen, alas, has not. During FormulaSpy’s live Twitter commentary of Sunday’s race, we tweeted that the Red Bull duo’s battle would end in tears. It was inevitable – they were just racing far too close and far too dangerously for it to go any other way. And the stupid thing about it was that they compromised themselves repeatedly, pace wise, to do so. Had Nico Hulkenberg not crashed out early doors, Renault may very well have been handed an extra advantage due to their squabbling. Lewis Hamilton was in touching distance after his pit-stop, only to have his lead grow as Verstappen, rather needlessly, fought excessively hard to keep the obviously faster Daniel Ricciardo behind.

Should Verstappen be benched for a round of the championship? #HaveYourSay #F1 #AzebaijanGP

Realistically, I can’t say that had another driver been in Verstappen’s car that it wouldn’t have ended the same way. We all know that the likes of Fernando Alonso and Sebastian Vettel are fiercely difficult to pass, and equally stubborn about not giving an inch. However, Alonso & Vettel are not notorious for moving around in the braking area after making their initial defensive move. Thinking back to 2016 and the infamous race at Spa where Raikkonen highlighted Verstappen for doing exactly what he did today and forced the Ferrari to back out at high speed down the Kemmel straight, Kimi said that “The FIA are looking elsewhere, and he’s going to cause a big accident some day”. Luckily, the big accident came at a point where there was plenty of room for both crashed Red Bulls to come to a safe stop without taking anyone with them.

Realistically, what can Red Bull do about it? It seems to be an open secret that Daniel Ricciardo is being openly flirted with by Ferrari & Mercedes for 2019, meaning that they are unlikely to want to annoy him by asking him to sit behind or yield position. Verstappen, by comparison, is a less safe bet for the future. Despite his obvious speed and tenacity, his ridiculous refusal to admit fault or submit when a battle is lost, coupled with driving errors that have resulted in spins or crashes at every single event this year (two crashes alone this weekend), mean that he is quickly becoming a points liability, rather than an asset. Daniil Kvyat lost his seat for less. Red Bull’s post-race reluctance to apportion blame smacks of an attempt to head off any possible FIA intervention, presenting the case that they will handle this internally.

Having spent the last two years being praised as the next coming of Christ and surrounded by all the yes-men that a young man convinced of his own superiority could want, Verstappen needs an ego check. He may well prove to be the best driver in the world later in his career but, right now, he is not. A step back to analyse his own driving standards could well be the making of him. He has ignored the advice and anger shown towards him from bigger and better drivers over the last two years, and behaves as though he is one of the sport’s established greats. He is not, and a large fanbase doesn’t change that. He is a promising young driver who needs mentoring and strong leadership. Arrogant comments like his “See you f**king later, son” when he got past Raikkonen in China show a childish mindset more akin to someone racing on a Playstation online lobby. Red Bull, up until now, appear to have let this mindset go unchecked, and it may be time for the FIA to intervene.

The pivotal moment in Baku 💥

Romain Grosjean is the most recent example of a driver who was forcibly suspended from the sport for a race, thanks to a string of incidents in 2012 that resulted in a huge crash at Spa that could have had serious implications for other drivers. Working with a sports psychologist, Grosjean came back calmer and has been a much more seasoned performer since, even he did his best to make a mockery of that statement with his silly crash on Sunday. Ignoring the inept Yuji Ide, Eddie Irvine is probably the next best example of a relatively contemporary driver getting a ban. He got one for causing a four car pile-up at Brazil 1994, ironically involving Jos Verstappen. This was shortly after Irvine showed a similar disregard for established drivers when he ignored blue flags against Ayrton Senna at Suzuka, with a similar brash attitude towards his competitors.

Red Bull should suspend Verstappen for a round. Heading to Spain, the scene of Verstappen’s exceptional debut for Red Bull Racing two years ago, being forced to sit out a race would help him refocus the mind and realise that there are consequences for selfish driving standards. If he doesn’t like it, so what? He doesn’t yet have the reputation or sway to do anything about it. If such a tough stance was enough to make him look to a competitor team for 2019, so what? He is yet to prove that he is capable of more than the occasional race win. By comparison, Ricciardo is the much more valuable asset and it’s him, not Verstappen, that Red Bull should be looking to appease.