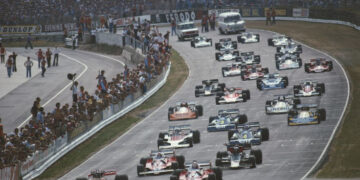 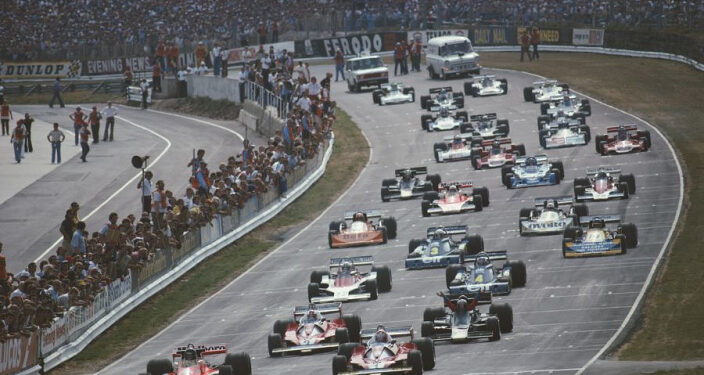 The top teams on the grid now have B Teams to support them. But there have been times when a team could use a competitor’s chassis, or even rent it!

A and B or “customer teams” as outlined by Zak Brown recently are a continued topic of discussion in the F1 paddock. Mercedes, Ferrari and Red Bull all have a B team to support their on and off track efforts. These relationships involve the sharing of resources, engineering expertise, gearboxes, and most notably engines. B teams, whether many like it or not, are now part of F1.

While this can cause political fallout in many areas,  one aspect of these relationships that has died out in the last ten years is the concept of “customer cars” – the idea that an F1 team can run a competitor’s previous seasons’ car.

What classifies as a “unique car” has changed throughout F1’s history, with the 2020 Racing Point an extreme interpretation of the rules. This has since changed, and copycat cars are now banned from 2022 onwards.

But what is the history of when a team takes a competitor’s previous car, rebadges it, and sends it out on track?

Results of this approach have been mixed, and while cost saving has been the underlying reason as to why teams have used previous season’s cars, it has ended mostly in failure. For some teams though, it gave them a stepping stone to better times. Only two examples remain of a team using a customer car and still racing today.

Williams had one of the first customer car relationships when they made their debut in 1969. Frank Williams used an old Brabham chassis powered by a Ford engine. It was not until 1974 that he used his own chassis.  While a  first podium was achieved a year later in 1975 at the Nurburgring, they hit financial trouble and withdrew.  When Williams re-entered in 1979, it was as “Williams Grand Prix Engineering”, with Patrick Head as Chief Designer of it’s contenders. Championships soon followed.

Other teams used customer/year old cars throughout the 70s, before it died out in the 80s. One of the most bold customer car stories was March.  Arriving on the grid in 1970, they pulled off competing as a works team, as well as  selling customer cars to competitors. Four of their cars started at the season opener in South Africa. March withdrew multiple times only to reappear but never as bold, only as a competitor.  It withdrew for the last time in 1992.

Teams in the past have also rented F1 cars – unthinkable today.

Penske in 1971, a full four years before their full time entry rented a Mclaren M19 and drove it at the Canadian Grand Prix. It achieved a shock third place. Today, this type of relationship and result is unthinkable.

The last of the customer cars

After its peak in the 1970s, customer cars faded away. They next appeared on the grid in the 2000s before being banned from 2010. This was in reaction to two constructors running the previous season’s competitor cars between 2006 and 2008.

The first was Toro Rosso when they arrived on the grid in 2006, a year after its’s parent team Red Bull. The STR01  was effectively a 2005 Red Bull RB5, rebadged in Toro Rosso livery. The paddock did not approve of a V10 engine (even if it was restricted) running in an identical car to a previous entry.

But as the season progressed, the year old design, and no engine development, ensured that the car would never trouble the top ten on race day. Toro Rosso continued to share car design with Red Bull until 2010, when the new Concorde Agreement banned customer cars. Although Toro Rosso was listed for sale to be sold ahead of the 2010 season, ultimately it continued as a separate entity. Although the cars are now independent, Red Bull and Toro Rosso continue to collaborate, to a lesser extent than pre 2010.

Minnows Super Aguri then used the basic design of the 2002 Arrows A23 chassis for their first year in 2006, a somewhat older design. The next season, they negotiated a deal to race a year old Honda F1 chassis that occasionally saw a breakthrough result.  Takuma Sato scored the team’s first points in its brief history, before disappearing a year later in 2008.  For that season the team once again used the previous year’s Honda chassis, which was a significant step backwards to it’s predecessor. Combined with financial difficulties, the team ran out of funds.

The 2010 season saw a ban on customer cars, which also coincided with three new teams arriving on the grid. Infamously, Hispania Racing Team (HRT) used a chassis bought from Dallara that did not turn a wheel until first practice of the first race in Bahrain.

The results were predictable, HRT was the slowest car in qualifying with Karun Chandhok 10.9 seconds slower than Sebastian Vettel’s pole time. While their pace relative to the two other new teams improved over the course of the season, they parted company with Dallara due to the performance issues.

Williams and Toro Rosso remain on the grid as entities in their own right. They have “B” team status, so share resources with their “A” team.  However the cars are fundamentally designed by the team’s themselves. Customer teams are part of F1 now, but a return to customer cars would be a detriment to the sport.

Solution from the past or future?

F1 today is not in a place where customer cars can succeed or are discussed, at least openly. Cost caps and cost reduction are now part of F1’s new DNA. But running a year old chassis’ on today’s grid might not be the best answer if it comes under consideration.

F1 has sometimes found solutions to present day problems in its past, the re-introduction of slick tyres and banning of refuelling in 2009 are recent examples. However, bringing back customer cars to today’s grid would lead to political infighting over performance inequality, plus petitioning of the FIA to cater for teams looking to run them. This in turn would then cause fallout from teams that design their own chassis every year feeling at a disadvantage.

Interest in F1 has always been on the Driver’s Championship, but a driver is nothing without the best car on the grid to propel them there. A driver in a customer car would be sacrificing the potential to contend for title glory. Simply put, no matter how good a year old chassis is, it is no match for the pace of today’s development or politics in F1. This is one occasion when a solution for the present lies in F1’s future, not its past.