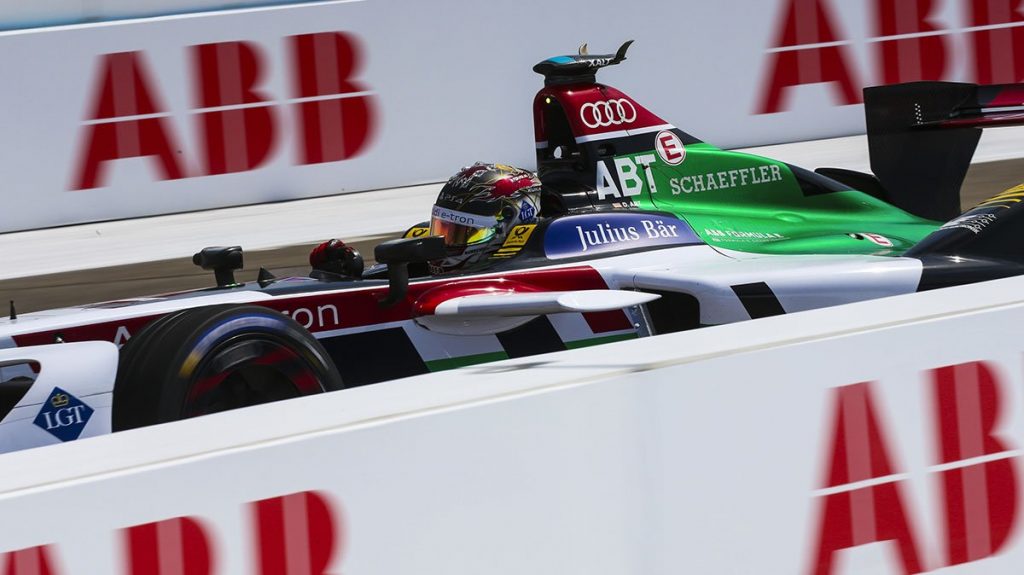 Berlin E-Prix – Daniel Abt led a 1-2 finish for the Audi Sport Abt Schaeffler team with Lucas di Grassi in his home Formula E race in Berlin.

Abt led the field away from pole position, and built up a gap of three seconds to front row starter NIO’s Oliver Turvey, but it was di Grassi he was pulling away from after the pit stop phase.

The two Audis came out one second apart after Abt was held for an extra three seconds so he was not released in front of Sebastien Buemi, but Abt recomposed the gap to an eventual 6.7 seconds by the chequered flag.

Di Grassi worked his way up from fifth on the grid, passing Dragon’s Jerome D’Ambrosio on the third tour of the 45-lap race. He then passed championship leader Jean-Eric Vergne and Renault e.dams Sebastien Buemi in the space of a lap to get into second.

Vergne was the eventual podium finisher after an intense battle with Buemi. The 2015/16 champion passed Vergne into the Turn 6 right-hander for fourth at the time, but ran wide at Turn 1 prior to the pit stop phase. Vergne squeezed back past, albeit with contact.

Buemi regained the position by jumping him in the pit stops having come in simultaneously.

He made a late lunge at Turvey for third into the final corner, pushing the NIO driver wide which allowed Vergne through, who then passed Buemi for third on the following lap.

Venturi’s Maro Engel was eighth having stopped a lap later than his rivals. Techeetah’s Andre Lotterer came from last on the grid, plus a ten-second time penalty for not being able to fully serve his grid drop, took ninth on the final lap from Mahindra’s Nick Heidfeld.

Felix Rosenqvist went off at Turn 1 on the opening lap which dropped him to the rear of the field. He just missed out on a points finish in 11th in the battle with his team-mate, the two Venturis and Jaguar’s Nelson Piquet Jr.

Dillmann took 10th after passing Heidfeld and D’Ambrosio in one move at Turn 1, but ran wide trying to pass Piquet which allowed both Mahindras past.

Dragon’s Jose Maria Lopez was set for ninth when he and Piquet went off at Turn 1 on the penultimate lap while running side-by-side, and Lopez spun again at Turn 3.

Despite a fourth-place start D’Ambrosio did not hang on to a similar position and was 19th at the chequered flag.