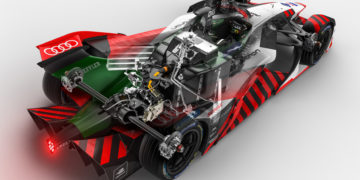 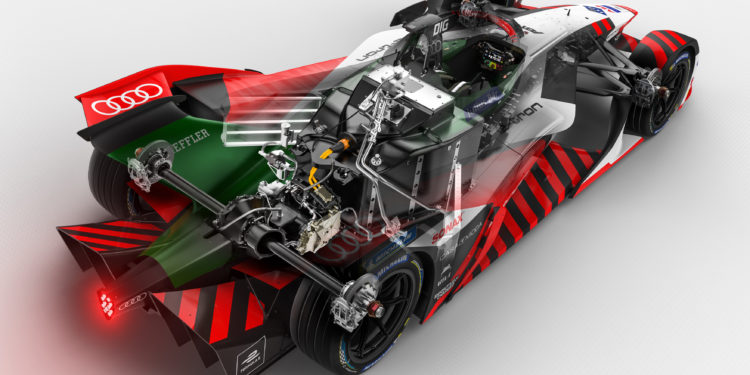 Audi Sport Abt Schaeffler have revealed their season 7 challenger which will compete for the first ABB FIA Formula E World Championship next year.

With the Audi driver lineup of Lucas di Grassi and Rene Rast already announced, the focus of today’s launch was solely on the e-tron FE07. While the livery is similar to last year with their now usual red-orange, green, black and white elements, the black and red-orange ‘danger stripes’ are still present around the edges but the new paintwork on the nose gives Audi’s Gen2 car a sleeker, pointier look for season 7.

Underneath the bodywork however is where the star of the presentation, the Audi MGU05 powertrain, sits. In previous years the powertrain used was a continually optimised version of one which had been jointly developed along with the team’s technology partner, Schaeffler. This season though, the MGU05 is Audi’s first fully in-house designed powertrain.

“The Audi e-tron FE07 has an all-new electric powertrain that was developed in-house for the first time,” said Audi Sport’s Head of Development e-Drive, Stefan Aicher. “We went to the limits in all areas of this project.”

The Audi engineers cut down on the unit’s weight by a combination of lighter materials and intelligent integration. “We were able to directly reinvest these [weight] savings in the new MGU for the benefit of enhanced efficiency,” said Aicher. “Even so, the new MGU inverter unit weighs less than 35 kilograms. This was an exceptional achievement by the whole team.”

Formula E Project Leader at Audi Sport, Tristan Summerscale, added that “We are leaving no stone unturned to reduce the energy loss within the system to an absolute minimum. We have achieved an overall efficiency of more than 95 percent for our powertrain. The new MGU inverter unit has an efficiency of even more than 97 percent in all relevant driving conditions.

“If you compare our MGU with an internal combustion engine delivering a comparable power output of 250 kW, our efficiency is not only twice as high, but our weight of less than 35 kilograms is also much lighter. This clearly shows what an efficient solution an electric powertrain is.”

Check out the gallery for the full livery and powertrain details.