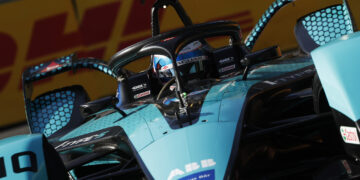 Bird brings it home for Jaguar in New York

Bird brings it home for Jaguar in New York 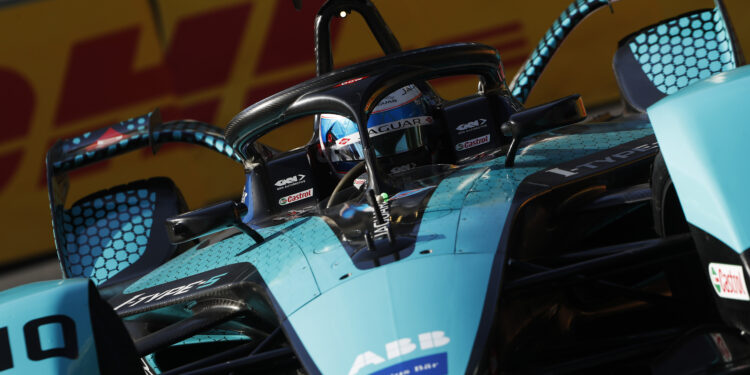 New York City E-Prix 2 – Sam Bird converted his pole to a victory for Jaguar but the 1-2 didn’t pan out as Evans hit a wall and fell out of the points.

Starting on pole, Sam Bird led a Jaguar one-two off the line but Virgin Racing’s Nick Cassidy got a better start in P3 than his fellow Kiwi and challenged Mitch Evans on the run down to T1. Evans locked up into the braking zone and was very close to going into the side of his teammate but it all worked out and both Jaguars got through safely and with positions secure.

After an issue with his car in qualifying, Jean-Eric Vergne lined up on the grid in P24 but it was a very short afternoon’s work for the double champion as his car stopped on the start grid as the light went green. That brought the Mini Electric Safety Car out for a few minutes while the marshals recovered the Frenchman and his car.

As they were yesterday, Mahindra were the first to head to the Attack Mode activation zone with Alexander Sims

Championship leader Edoardo Mortara was fighting mid-pack with BMW’s Jake Dennis but after some wheel-to-wheel contact was speared into the barriers. The Venturi driver was able to extract his car and continue but had fallen to the back, however his closest rivals, Robin Frijns and Vergne weren’t in point scoring positions at that point either.

Just over ten minutes into the race and the two Jaguars took their first Attack Modes and Cassidy did briefly get past Evans as they did but Evans got back through and the Virgin driver was told to just let the top two tow him along. At the half-way point of the race Cassidy was in his first Attack Mode and was right on Evans’ tail. The Virgin driver got into P2 but a few laps later Evans repaid the favour with his second AM activation.

Behind the top three it was reigning champion, Antonio Felix da Costa, who had quietly made his way up from P7 was creeping towards the top battle and had a bit of space behind him to the two Porsches, with Andre Lotterer just on the tail of his teammate, Pascal Wehrlein. While Sergio Sette Camara, who had started P5, had been holding well in the points positions for Dragon/Penske Autosport but was being stalked by Alexander Sims for a while before the Mhaindra struck not too long before they entered the final third of the race.

The classic Formula E rivalry of Lucas di Grassi and Sebastien Buemi did make itself known as the two came to blows on track leading to the Nissan e.dams being hit and spun, dropping out of the points from P9. The Audi driver was soon handed a 10-second time penalty as a result.

While Bird had pulled out a few second gap, Cassidy and da Costa were right on Evans’ tail and looking for any chance to progress. The two Kiwis had to pull some defensive manoeuvres as first Cassidy tried a move on Evans before da Costa used his FanBoost to try make it onto the podium. Neither made their moves stick but with just less than ten minutes left, the two Porsches had joined onto the back of their train.

It was all calm until the final two minutes, Evans lost places to both Cassidy and da Costa and was visibly slower on track, falling well back and a few corners later both Porsches slipped past him too. The commentators speculated that he might have hit the wall as his steering wasn’t straight and post-race the footage was shown that he drifted too wide and hit the wall, Evans said post-race that it was the same error as he made during qualifying. The pain wasn’t over for the Jaguar driver though as he was mobbed on the final lap falling well down and out of the points.

Sims brought his Mahindra home in sixth while Norman Nato gave Rokit Venturi their only points of the weekend in P7. Robin Frijns drove a fantastic recovery race from P21 to P8.

It was a good day for Mahindra as they got both drivers into the points with Alex Lynn coming home in P9 while yesterday’s victor, Maximilian Guenther, gave BMW i Andretti the final point. The point  for fastest lap in the top ten went to da Costa.

Bird’s victory means that he now moves to the top of the championship standings after heading into the day well down in thirteenth spot, while da Costa moves into second. Frijns’ points move him ahead of Mortara and into third of the championship.