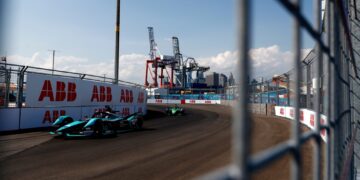 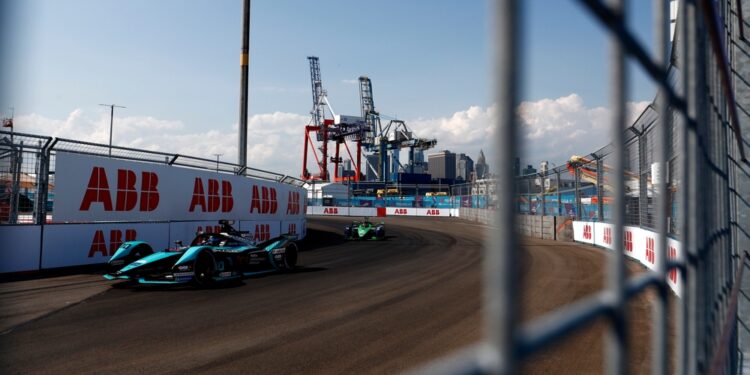 New York City E-Prix 2 – Sam Bird set the best time ahead of Nick Cassidy in the only practice ahead of the second day of racing in New York.


The third and final practice session of the New York weekend took place in damp conditions with quite a few of the drivers taking to the track in newly repaired or newly built cars after the rain-caused chaos that was the premature end to the E-Prix yesterday. On positive of the deluges yesterday however were that they put pay to the dust that was all over the circuit and had been thrown up in big clouds as the cars circulated.

Mitch Evans was the first to set a time with a 1:19.425 but after ten minutes, multiple seconds had been shaved off the times and it was Dragon/Penske’s Sergio Sette Camara, who didn’t to start yesterday’s race after the team weren’t able to repair his car in time after a crash in qualifying, was on top with a 1:11.167.

Lucas di Grassi, one of those in the big crash yesterday, was the last to make it out on track. The season three champion getting on track and setting times just before the half-way mark. With ten minutes of the session left Sette Camara was back at the top of the times with a 1:09.288, while Jean-Eric Vergne was just 0.006 seconds slower.

The track was almost completely dry by the end of the half hour of practice and the final few minutes saw a flurry of fast laps with Sam Bird as the first to get under 69 seconds today with a 1:08.745 just as the clock ticked past the three minute mark. With the drivers pushing, there were some very on the edge moments but all remained mostly out of the wall, with all bodywork still intact, and Bird’s time was good enough to hold the top of the charts though the Jaguar racer did feel there was more time to find in the first sector.

Yesterday’s race winner, Cassidy, ended the practice in P2 just 0.095 seconds off Bird’s pace while his fellow podium finisher, di Grassi, wasn’t stymied by missing the first half of the session and put his Venturi into P3 with a 1:08.985.

Antonio Felix da Costa was P4 for Techeetah while Andretti’s Jake Dennis was in P5 with a best of 1:09.008. Mitch Evans took P6 in the second Jaguar and, just like his teammate, had an Envision behind him with Robin Frijns in P7.

Andre Lotterer and Oliver Rowland in P8 and P9 both set the same lap time, a 1:09.127, but the Porsche racer had it first so he gets the higher position. The top ten was rounded out by the Porsche of Pascal Wehrlein who was 0.467 seconds off Bird’s time.

The top seventeen all set times within a second of each other while just less than a second and a half covered the whole of the grid.