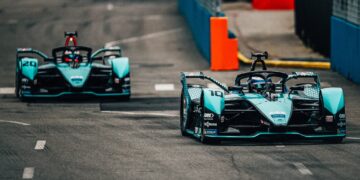 Bird perched on pole as Jaguar lock out row one

Bird perched on pole as Jaguar lock out row one 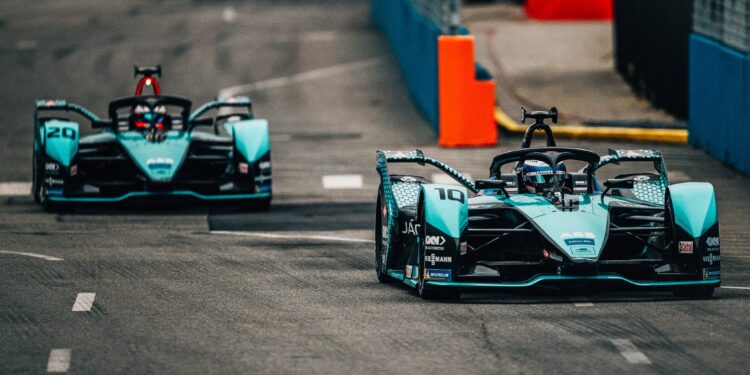 Group one was looking like everything was going smoothly, all drivers were pretty much in a row but there was no squabbling over positions, however things changed at the first corner of the flying laps. Antonio Felix da Costa had a big lock up but despite that was still the fastest driver in the first sector, Robin Frijns the joint championship leader, also had a bad first turn but his caused him to lose a second to his competitors.

The worst luck went to Jean-Eric Vergne who slowed just after T1 and didn’t manage to complete a lap so he will start at the back. The Techeetah driver told his team that the throttle went dead but he was able to continue around to the pits so there was investigation to be done on that problem.

There was no drama for Edoardo Mortara this time, his car going into 250kW mode today and allowing him to post a time just less than half a second off Mitch Evans who had a 1:08.914.

While there had been a few spits of rain for the first group, it started coming down heavier as the second group was out on track, as a result the times weren’t as quick. Lucas di Grassi put in the best of the times but could only slot into fourth, over four tenths off the G1 best. The Aiudi driver and Oliver Rowland were the only two to make it into the provisional Super Pole positions, P4 and P6 respectively.

Group three saw a slightly drier track and four of the six drivers making it into the top six, Pascal Wehrlein the first to finish his lap and went fastest before Sam Bird reclaimed the top spot for Jaguar with a 1:08.855. Yesterday’s polesitter, Nick Cassidy, and Andre Lotterer were the other two into the potential shootout positions. Da Costa holding onto P6 as the two Mahindras were slowest of their group and went seventh and eighth.

The final group was a disappointment for yesterday’s fastest group qualifying driver and pole contender, Sebastien Buemi. The Nissan driver could only manage P13 but it was Dragon/Penske Autosport’s Sergio Sette Camara who was the best of the bunch denying da Costa a chance at pole by going 0.014 seconds faster and claiming P6.

Super Pole saw Sette Camara, Lotterer, Cassidy, Evans, Wehrlein and Bird vying for the best view on the grid. The Dragon was out first and while he started well with a good first sector, couldn’t keep the pace up over the lap ending with a 1:08.988 as the time to beat. Lotterer was up next, starting his lap with a dramatic, smoky lock-up. The Porsche driver was slower in sector one but despite being quicker over the rest of the lap was over half a second off when he took the chequered flag.

Nick Cassidy, attempting to repeat his Super Pole performance from yesterday, put in the fastest first and third sector to beat the Dragon by three tenths. The Virgin driver didn’t get to enjoy the provisional top spot for long though as the other Kiwi in the field, Mitch Evans, went 0.001 seconds faster even after a slight lock up and knocking the walls on the way.

The penultimate attempt was Pascal Wehrlein’s, the Porsche jumping the kerbs and just brushing the walls on his run but couldn’t manage to challenge and his lap was 0.156 off Evans.

Sam Bird was the final runner and the best was saved for last, as he went quicker than Evans in sector one and put in the best final sector to end with a 1:08.572, 0.090 ahead of the other Jaguar. It was a great recovery for Bird after Jaguar had to completely rebuild his car after an FP1 coming together with the wall, which saw him miss FP2. The British driver started near the back in yesterday’s race but was able to recover to P9 and take the fastest lap point too.

Evans was visibly disappointed to lose out to his teammate feeling that he handed the position to Bird thanks to the mistakes he made in the opening few corners.

Da Costa will start from seventh, just ahead of the two Mahindras with Lynn just ahead of Sims while Norman Nato will be tenth for Venturi.