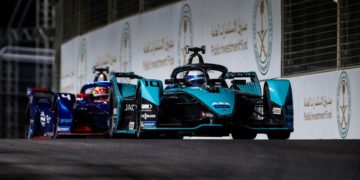 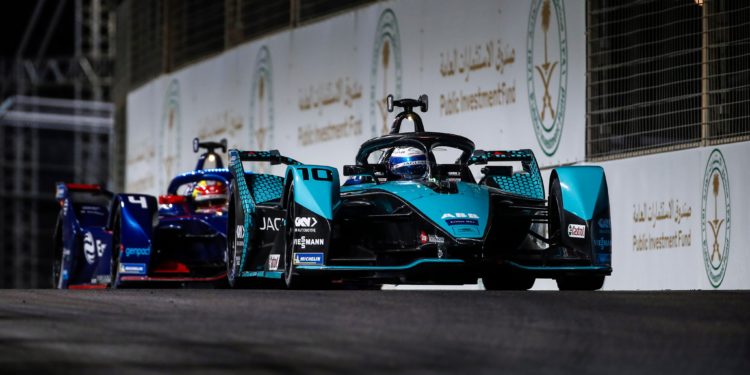 Diriyah E-Prix 2 – Sam Bird continued his record of winning a race in each season as he managed to get the better of Robin Frijns in Diriyah.

There is currently no information on Alex Lynn’s incident but the Brit is conscious and been brought hospital. He seems to have been involved in the final FCY incident which was upgraded to a Safety Car before the race was red flagged. There were no replays of Lynn’s accident but apparently his Mahindra ended upside down against the barriers.

STATEMENT: Following his accident in today’s ePrix @alexlynnracing is conscious, talking and on his way to hospital for checks

As the race started, Sergio Sette Camara had a slow start which allowed the Jaguar of Sam Bird to pounce and slip through to second at the first corner. It was quite a calm first few laps, with Bird sticking close to Frijns’ Envision Virgin, with the two pulling a gap to the third place man.

Further back in the top ten, Antonio Felix da Costa was moving up the order, sliding down the inside at T8 to take seventh from the NIO 333 of Tom Blomqvist while right behind them Nick Cassidy tried to go around Sebastien Buemi’s Nissan e.dams on the outside but wasn’t as successful.

The first lead change came after fifteen minutes, Frijns activated his first Attack Mode while Bird was told to do the opposite of the Dutchman and briefly took the lead. The first Full Course Yellow of the evening was caused when Pascal Wehrlein was scrapping with the BMW of Jake Dennis and pushing him into the wall. All Dennis could do with his broken car was pull over to the pit exit, where it was recovered from.

With twenty minutes still on the clock, the race was back on and the top two were joined by the Techeetahs. Da Costa got one go at Bird before falling behind and then squabbling with Jean-Eric Vergne, the cars got physical and almost ended with Vergne in the wall but both made it through mostly unscathed.

Frijns and Bird swapped positions a few more times but after the Brit took his final Attack Mode, he regained the lead and managed to pull out almost a two second lead before the second Full Course Yellow was flown.

What was shown was that Maximilian Guenther locked up and couldn’t avoid Blomqvist’s NIO 333, but it also seems that Mitch Evans and Lynn had some incident, whether as a result of Guenther/Blomqvist’s or a separate one. Initially the second Full Course Yellow was shown with over 11 minutes left, but a few minutes later it was upgraded to a Safety Car and then, with 2:41 on the clock, the red flag was shown and Bird was declared victor.

Bird was joined on the podium by Frijns and Vergne but the Frenchman was unable to activate his final Attack Mode due to the incidents so there might be some penalty for him.

Da Costa was fourth, making it a much more successful race for the reigning champions compared to yesterday. The second Virgin, driven by Nick Cassidy, placed fifth while the two Dragons took sixth and seventh, Sette Camara and Mueller respectively, outscoring their season 6 points tally in one race as the NIO 333’s did in the first race.

Speaking of NIO 333, Oliver Turvey brought more points to the team with an eighth place ahead of fellow Oliver, Oliver Rowland of Nissan e.dams, who finished ninth. The final spot in the top ten went to Rene Rast who also took the point for Fastest Lap. That’s two in a row for the Audi Sport Abt Schaeffler driver who also took it yesterday as times set using Fan Boost are ineligible which meant Stoffel Vandoorne didn’t receive the point as initially believed.

After his FP3 accident Edoardo Mortara was cleared by the hospital and returned to the circuit but Venturi were unable to fix his car in time for him to compete. As a result of that accident and the investigation into its cause, Mercedes powered cars were unable to compete in qualifying which meant yesterday’s victor, Nyck de Vries, started at the back, alongside Vandoorne and Venturi’s Norman Nato. None of them were able to make it to the points however.