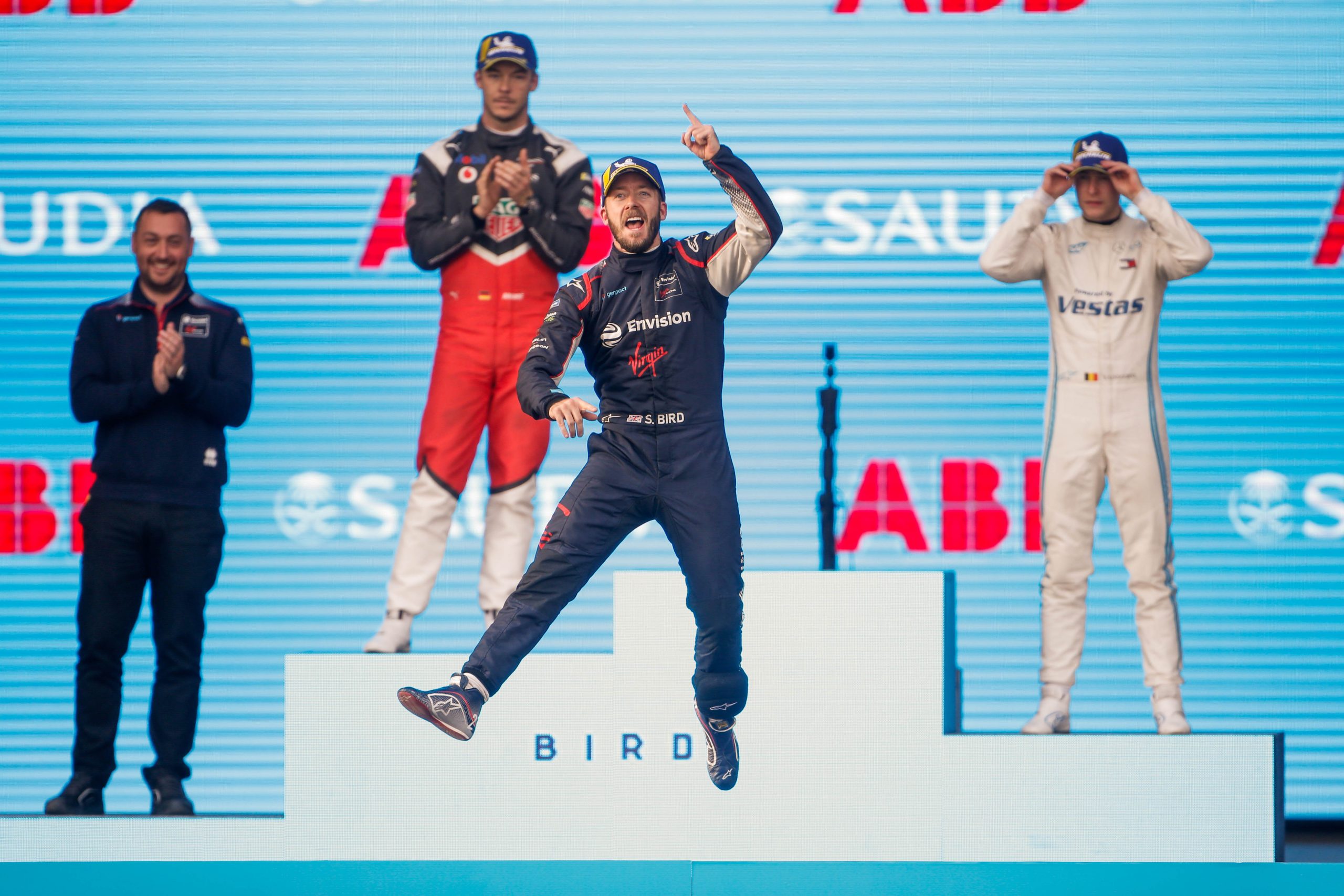 Bird wins as Mercedes and Porsche make their mark

Bird wins as Mercedes and Porsche make their mark

Bird’s victory comes exactly five years to the day of his and Virgin Racing’s very first win in Formula E at the second round in the inaugural season, the Putrajaya ePrix. As the Virgin team race with an Audi power train it means that it was an all-German podium with Audi, Mercedes-Benz and Porsche were all represented.

Starting from fifth after a mistake during his Super Pole run, Bird and the rest of the top seven held position at the start before setting his sights on and making his way past Edoardo Mortara’s ROKiT Venturi. The Brit then closed up on the leading trio, going around the outside of Nyck de Vries before challenging the other Mercedes-Benz EQ driver, Stoffel Vandoorne, for second.

As Bird went for second, Vandoorne challenged for the lead and despite slight contact with pole-sitter and leader Alexander Sims, Vandoorne took first with Bird following him through. From there all the Virgin Racing driver really needed to do was wait as the Belgian still needed to activate Attack Mode one last time and was guaranteed to lose time on the dirt while doing so.

Bird though saw an opportunity and slid down the inside to move into first with just over 10 minutes remaining. Vandoorne meanwhile did lose time and a position activating his Attack Mode but a Safety Car period as soon as he’d done so meant he couldn’t use the extra power in an attempt to regain it.

Andre Lotterer was the man to take that position from Vandoorne and, despite thinking about having a crack at Bird at the end, was content to finish second for TAG Heuer Porsche’s debut in Formula E.

It was an up and down day for Nissan e.dams, Oliver Rowland started eighth and put in a very solid performance to finish fourth. Sebastien Buemi’s car however stopped at the side of the track after less than five minutes, he did manage to get it back to the pits but didn’t rejoin the race.

Starting from 12th, Robin Frijns wrangled his Envision Virgin into a final fifth place meaning that with a first and fifth, the team is leading the Teams’ Championship as well as Bird in the Drivers’ one. Mercedes’ Nyck de Vries and Venturi’s Edoardo Mortara started third and fourth but couldn’t hold fast against their opponents, they finished sixth and seventh respectively.

After starting on pole and leading for the first half hour, Alexander Sims’ day ended quietly with an eighth for BMW i Andretti. The top 10 was rounded out by Mahindra’s Jerome d’Ambrosio and Panasonic Jaguar’s Mitch Evans in ninth and tenth.

It was not a good day for Jean-Eric Vergne, he retired his DS Techeetah after just less than half an hour as his steering wheel had become heavier and heavier throughout the race until it was too dangerous to continue with.

The Safety Car emerged with six minutes left on the clock after an incident between DS Techeetah’s Antonio Felix da Costa and Audi Sport Abt Schaeffler’s Daniel Abt left the German stranded sideways across the track. The stewards will be looking into the incident.

The race was only contested by 23 cars as GEOX Dragon couldn’t fix Nico Mueller’s car in time after his incident in qualifying.