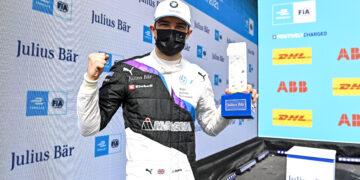 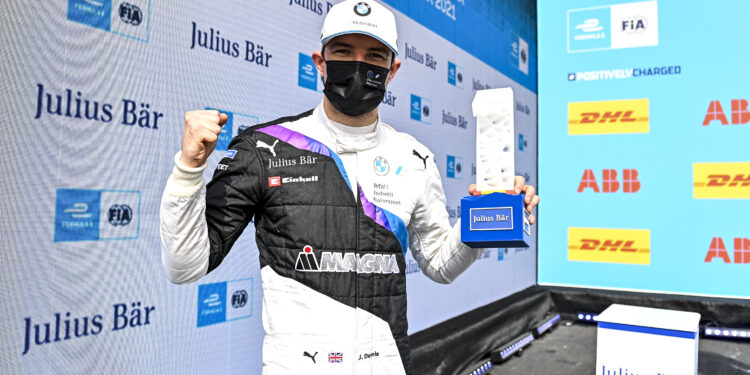 Valencia E-Prix 2 – Jake Dennis put in a fantastic lap for BMW i Andretti to take his debut Formula E pole for this afternoon’s Spanish race.

After taking his first points yesterday with eighth place, Dennis now gets to double that haul after he topped group qualifying and then set a 1:28.548 in super pole to beat the Tag Heuer Porsche of Andre Lotterer by 0.863 seconds.

Click here for the group and super pole times.

Although he qualified second, Lotterer will be starting from the third row of the grid as he was handed a three place grid penalty for causing a collision with Edoardo Mortara in the race yesterday. On the drying track, each of the drivers in super pole were getting slightly better conditions and, as such, were each going faster than the previous.

Alex Lynn was third for Mahindra Racing, but will start alongside Dennis on the front row of the grid, while the two NIO 333’s of Tom Blomqvist and Oliver Turvey were fourth and fifth in the session but will lock out the second row.

It was another strong qualifying for Norman Nato, the Frenchman making his Rokit Venturi the highest placed Mercedes powered car on the grid with a sixth place. The track progression over the qualifying session saw all drivers in the final qualifying group make it to the super pole shootout.

Seventh was yesterday’s ninth and final race finisher, DS Techeetah’s Jean-Eric Vergne, whose group 2 time held the top of the table through group 3 but was just 0.043 too slow to stave off any of the final group of drivers. The two Nissan e.dams were eighth and ninth with Oliver Rowland’s 1:33.336 enough to seal the higher position by five hundredths to Sebastien Buemi. Tenth spot went to Dragon/Penske Autosport’s Sergio Sette Camara.

Nick Cassidy and Maximilian Guenther will start from the back after the two had their best lap cancelled after they set those times by going outside the track limits. Cassidy’s off track excursion did not aid his now-deleted lap time as he was on track to put in a very good time from group 3 having set the best first two sectors but made a mistake and went wide, losing a good chunk of time and triggering a track limits investigation, which saw him end qualifying 18th before the lap was deleted.