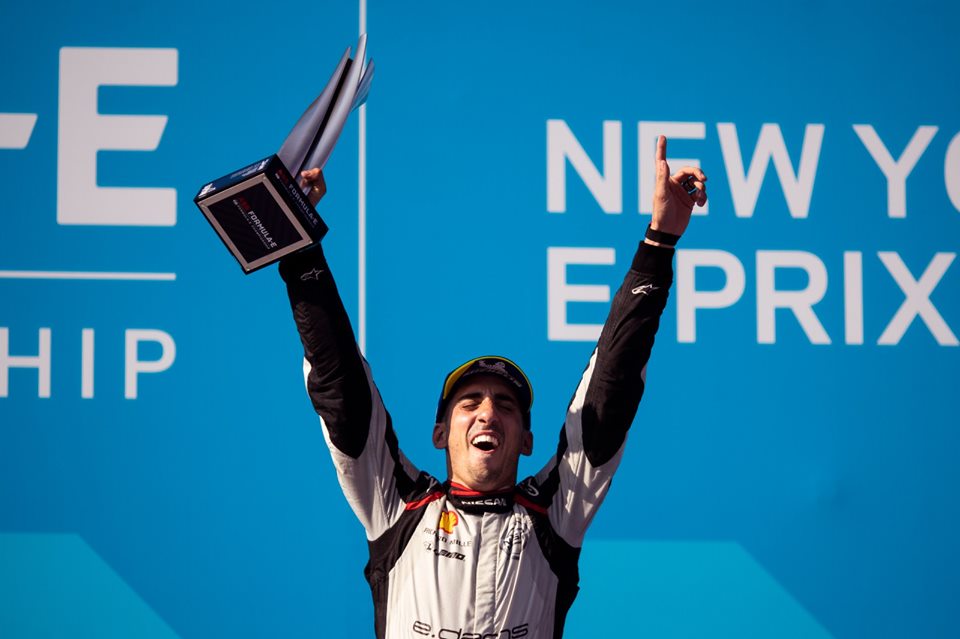 After a two year drought, Buemi, the driver with the most wins in the series, finally returned to the top step of the podium and keeps his championship hopes alive. The Swiss driver had the most straightforward drive of anyone as he dealt with overtaking attempts from Jaguar and BMW i Andretti drivers before securing Nissan’s first win after having had their driver’s starting from pole in half the races this season.

Alex Lynn had been putting pressure on Buemi from the start after he overtook Pascal Wehrlein on the run down to the first corner but half way through the race, just as he was looking to have another go at the lead his car lost power with what he reported as MCU and coolant pressure errors causing the Jaguar driver to have to retire.

Taking up second place and taking the challenge to Buemi then was Alexander Sims, the BMW i Andretti driver put the pressure on for a few laps before being passed himself by Mitch Evans and then ceeding his third place to BMW teammate Antonio Felix da Costa who was ahead in the championship standings.

Mitch Evans put in an incredible drive to take his Panasonic Jaguar Racing car from 13th on the grid to finish on the podium for the third time. Despite taking a hit on the opening lap the Kiwi progressed rapidly through the field and admitted afterwards that he didn’t think he made many friends in that race, but his team will be very happy with his efforts. Evans’ most opportunistic move came as Daniel Abt was attempting a move on Sims for second, the German’s offence quickly turned to defending against da Costa while Evans slipped through to third.

Lucas di Grassi kept his championship hopes alive by staying out of trouble and driving smart to finish in fifth place. The teams’ championship is also all to play for now as Daniel Abt brought his Audi Sport Abt Scheaffler home right behind his teammate and taking the point for fastest lap to leave it all to play for in tomorrow’s race.

Pascal Wehrlein finished behind the two Audis in seventh while a 10 second penalty for causing a collision with the Dragon cars knocked Sam Bird down from sixth to eighth. Jerome d’Ambrosio, despite starting last, being caught up in a last lap incident which included the Belgian driving completely over the nose of another car, managed to give Mahindra their first double points finish since Rome with his ninth place.

In the final point scoring position was NIO’s Oliver Turvey who hasn’t finished in the top 10 since Hong Kong, seven races ago.

The biggest drama of the race came on the last lap where Jean-Eric Vergne was making a move on Felipe Massa for ninth place when the two came together blocking the track for Stoffel Vandoorne, Jerome d’Ambrosio and Andre Lotterer. D’Ambrosio came out of it all the best as his car was shoved over the front of Massa’s car by Lotterer allowing him to jump from 11th into the points. All this after Vergne and Lotterer had a coming together on the opening lap which caused a puncture for the championship leader  and left them both at the back of the pack.

Tom Dillmann continued his woeful year with another first lap retirement, this one due to damage after a collision. Robin Frijns took a few more laps before succumbing to first lap damage of his own.

Edoardo Mortara’s race ended in the wall with less than 10 minutes left on the clock. While Maximilian Guenther was also the victim of collision damage.