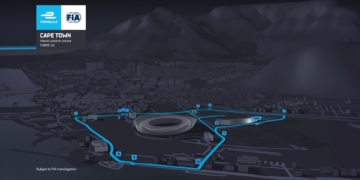 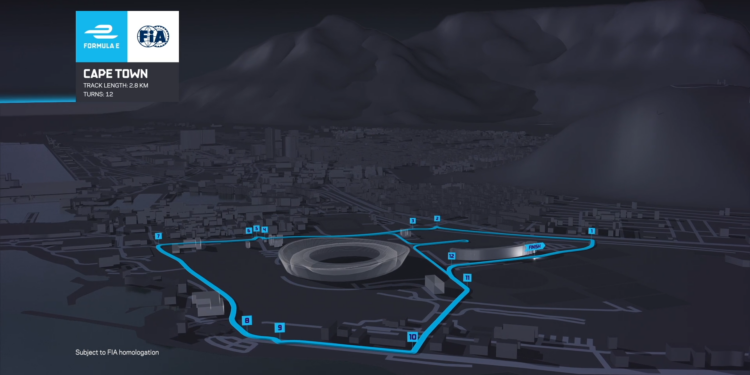 With Formula E set to head to South Africa in season 9, the proposed layout for the Cape Town track has now been revealed.

Initially scheduled to appear on the season 8 calendar, Cape Town is now expected to make its inaugural Formula E appearance next year. The track, which the series believe will be one of the fastest layouts, is proposed to be in the city’s Green Point and Waterfront districts.

The circuit is set to encircle Cape Town Stadium and have dramatic views of some of Cape Town’s most well known landmarks with Table Mountain to the south and Robben Island to the north.

The city is set to begin upgrades on the roads where the track is proposed next month and hope to have them finished by the end of the year.

“We’ve had a very positive response within our ecosystem of teams, drivers and sponsors about coming to Cape Town,” Formula E’s co-founder and CCO, Alberto Longo, said. “So we are delighted that the City is joining our Season 9 calendar.

“When I first met Iain Banner [Chairman of race promoter e-Movement Ltd] in 2019, he said that he was confident that Cape Town had the potential to be one of the top cities on our global calendar. This is my first visit to South Africa and having now seen the beauty of the Mother City, I feel confident that he is right.”

This track is predicted to be one of the fastest in the series and showcases some of Cape Town’s most famous locations 🇿🇦 pic.twitter.com/AewhZUIpaE

Banner believes that hosting the all-electric series will help Cape Town become a driving force for sustainability and renewable energy in South Africa. There is also a plan to create a week-long E-Fest around the race which would consist of an Investor Summit and e-Mobility Festival.

“The public has been crying out for an open-wheel, street-circuit race,” said Banner. “And we are now answering those cries. With Table Mountain as the backdrop and Robben Island in the foreground, I have no doubt the ABB FIA Formula E World Championship will garner substantial support in Cape Town and throughout South Africa.

“We believe that hosting the ABB FIA Formula E World Championship in Cape Town will showcase Africa as a role player in the transition to a greener future, and will position the city and the Western Cape as the pioneering renewable energy hub of South Africa.”

Alan Winde, Premier of the Western Cape, is very much on board with the plans and is looking forward to the additional tourism and investment that it will bring to the area.

“I am so pleased that the Western Cape will be hosting the Formula E and E-Fest, showcasing our province as the Green Economy Hub of Africa,” Winde said. “This event will also be a perfect opportunity to showcase our destination as an attractive place for tourism and investment, as we focus on growing our economy and creating an enabling environment for the private sector to create jobs. I wish the organisers all the best!”