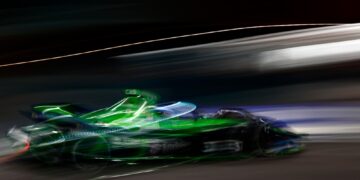 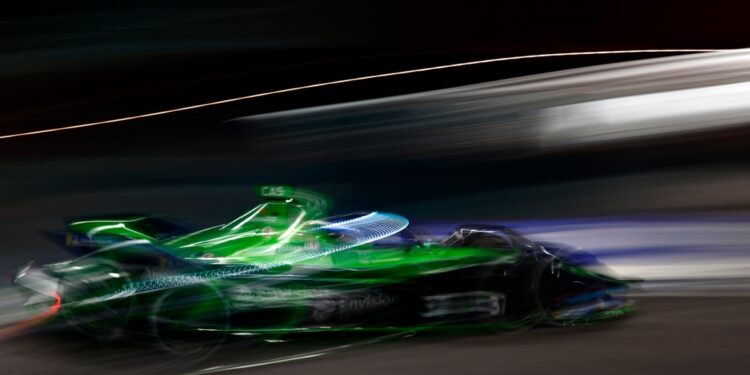 London E-Prix 2 – Nick Cassidy topped the times ahead of Antonio Felix da Costa in the only practice session ahead of the second London race.

As usual once the lights went green for the practice session, all cars headed straight to the track to get as much preparation time before qualifying for race two. Mitch Evans was first out and his opening time of 1:23.592 was more of a warm up lap. Once the cars had all managed a proper timed lap it was Nyck de Vries at the top of the pile with a 1:14.271.

De Vries took the chequered flag in P3 and celebrated the position on the podium but then a few hours after the race after the stewards decided that some of his manoeuvres to keep Nick Cassidy behind at the end of the race were against the rules and so a time penalty demoted him to P6.

Dragon, and especially Sergio Sette Camara, were one of the standouts so far this weekend with the Brazilian topping FP1 and then duelling his way to P4. Sette Camara was looking set to get Dragon’s first points of the season but issues on the final lap saw him fail to take the chequered flag.

Sette Camara and his teammate had an amusing moment during this session too after Antonio Giovinazzi spun on track and backed down the track into the runoff as he was facing the wrong way. The first driver to come across him was his teammate, who waved to the Italian as they headed down the track nose to nose.

.@Anto_Giovinazzi goes for a quick spin in practice!

Halfway through the session Edoardo Mortara was in P1 with a 1:13.140. The Venturi driver had a day to forget yesterday after a collision at the start saw him at the back for the whole race which means his title hopes are now very slim indeed.

Mortara had a moment himself during the session, spinning and just tapping his rear wing against the barriers but then as he got back going he and Jean-Eric Vergne had a slight coming together which the stewards will be looking at. A bit later Mortara also went side-on into the barriers at T11, he was able to recover back to the pits but ended his session a few minutes early.

Heading into the final ten minutes it was Jake Dennis, yesterday’s winner, who was leading the way with a 1:13.092 but as the time counted down Sette Camara and Robin Frijns shaved the time down slightly before Cassidy broke into the 1:12s with a 1:12.933.

It looked like the two Envisions were going to hold out at the top but a late flyer from Antonio Felix da Costa saw him become the only other driver into the 1:12s and into P2.

Frijns’ 1:13.026 left him in P3 with Sette Camara again showing great pace to finish P4, 0.004 seconds slower. Dennis was P5 with the Porsche of Pascal Wehrlein behind him, 0.188 seconds off Cassidy’s time.

P7 went to Stoffel Vandoorne, the only Mercedes in the top ten, with Mortara’s 1:13.140 good enough for P8. Oliver Rowland and Lucas di Grassi rounded out the top ten with the Brazilian only 0.238 seconds slower than the leading Envision. There was not much separating the field with the top twenty were covered by nine and a half tenths and the whole grid within 1.078 seconds of each other.