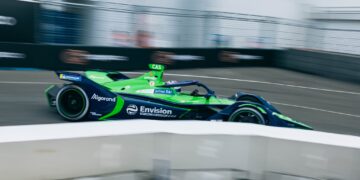 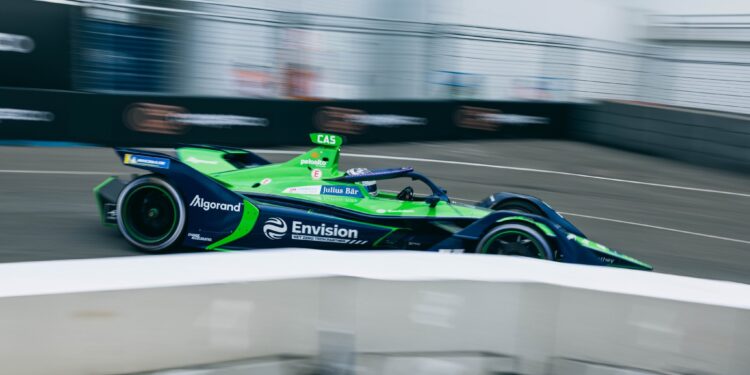 Alexander Sims was first out on track when the lights went green to start the session, but he wasn’t able to enjoy a quiet circuit however as all eleven cars were out and circulating before the Mahindra racer had finished his out lap.

The first time on the board was a 1:10.442 from Sergio Sette Camara, and by the halfway point, when a time must be set, championship leader Edoardo Mortara pulled back into the pit lane without a time after going into the run-off on track before that. All looked calm in the Venturi garage and it was later revealed that it was a brake-by-wire issue.

The track went silent for a few minutes while all cars ducked into the pits for tyre changes and final run preparation, at that point Robin Frijns was fastest with a 1:09.760 while Pascal Wehrlein, Jean-Eric Vergne and Nyck de Vries were those in the progression positions.

Sette Camara was back out first in the final few minutes while Oliver Rowland was set to be the final car to take the chequered flag. There was a lot of backing off as drivers tried to give themselves space and Nick Cassidy, yesterday’s pole sitter, had moved to the back and would be the last to set a time.

With Mortara set to start at the back, it was a chance for Vergne and Frijns to take advantage but the two touched the walls and weren’t able to improve. It ended with Sette Camara taking P1 with a 1:09.566 while Cassidy, de Vries and Sims snatched the remaining duel places.

Antonio Giovinazzi was the first to take to the track, but as with the opening group, the other ten weren’t too far behind. The Dragon racer’s opening lap was a 1:10.474 but once all had put in their opening effort it was Lucas di Grassi’s 1:09.700 that was leading the way.

The second attempts saw a lot of improvements and as the track started to quiet just after the six minute mark it was Antonio Felix da Costa’s 1:09.407 in P1 while Andre Lotterer, Stoffel Vandoorne and di Grassi in the top four spots.

NIO 333’s Dan Ticktum, who had been looking fast at the start of the session was the first out for the final runs while there was a six car train at the back with da Costa, Giovinazzi, Max Guenther, di Grassi, Vandoorne and Mitch Evans all jockeying for position.

There was once again a lot of movement on the timesheets as laps were completed and while it initially ended with di Grassi in P1 with a 1:09.353 but Venturi’s qualifying went from bad to worse as the Brazilian’s two best laps were cancelled as he apparently didn’t spend enough time in the pits. That moved him down to P10 and that meant Lotterer got the final place in the duels.

Evans ended in P1 with a 1:09.371, with da Costa, Vandoorne and Lotterer also progressing.

While the first sectors were very similar it was a slight advantage to the Dragon racer but Lotterer pulled a gap during sector two and while the young Brazilian gave it everything at the end he could only close the gap to 0.041 seconds.

Yesterday’s polesitter and winner, Cassidy, looked in full control in the second quarter-final. A slight mistake from Vandoorne which saw him take too much kerb slowed him down but the Envision racer made his own error in the final sector but that wasn’t enough to let the Mercedes get within a tenth and so Cassidy remained in the running for a second pole of the weekend.

Initially there looked to be nothing in it between de Vries and da Costa but the Techeetah driver pulled over two tenths out over the Mercedes driver and while the reigning champion had looked to be reeling the time back in, like his teammate, he took too much kerb which slowed him down and so neither Mercedes would be progressing.

The closest quarter so far, the Mahindra racer had the initial advantage with a better first sector and while Evans did have the better of the remaining sectors, despite a tap on the wall, that opening advantage was just enough to hold the championship-challenger off and so Sims will progress with a 0.006 second quicker time.

A mistake from Lotterer at the start gave Cassidy over half a second of advantage and unfortunately for the Porsche driver that gap only just grew and it ended with over a second separating the two as the Envision driver’s charge continued.

With Sims taking the opening advantage at the start despite a big lock up, there was barely anything in it until the final sector, more specifically the final corner, where the Techeetah pull out almost a tenth so the final will be a green vs gold affair instead of looking like a duochrome test from an eye exam.

There was just less than a tenth between the two after the first sector and while da Costa did pull a bit back at times, there was no stopping the Kiwi on his way for a clean sweep of poles this weekend. The Envision racer was slightly quicker in each sector and at the end it was 0.167 seconds between the two finalists.

With the faster of the semi-final times Sims will start in P3 with Lotterer alongside. Similarly for those who didn’t progress past the quarters, Sette Camara will start from P5, with Vandoorne in P6. Row four will see Evans ahead of de Vries while Andretti round out the top ten with Oliver Askew in P9, as he was the first not to progress from the pole-sitter’s group, and Jake Dennis beside him.