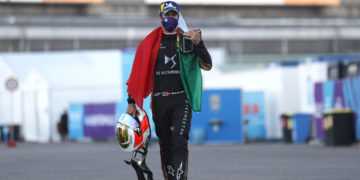 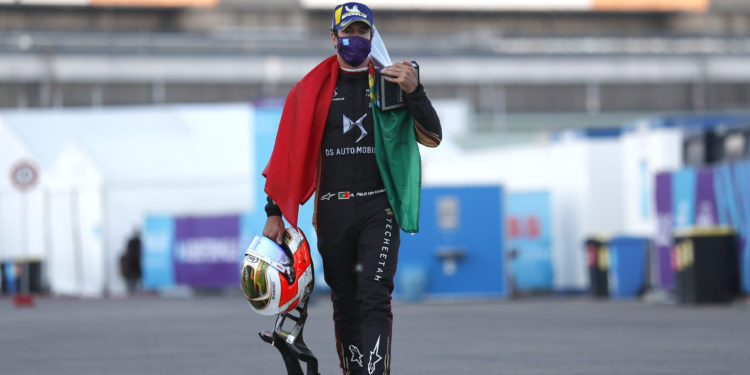 Antonio Felix da Costa put in a another dominant lights to flag victory for DS Techeetah at the second of the Berlin finale events.

After pulling out another incredible lap to secure top spot on the grid in super pole, Antonio Felix da Costa’s lead was in no danger at the start of the second and final reverse Berlin E-Prix.

The DS Techeetah and second place Sebastien Buemi headed off unchallenged while Alex Lynn and Nyck de Vries squabbled over third, the place swapping multiple times before the Mercedes made it stick.

Lynn never really had the pace during the E-Prix though and slowly fell away to finish just outside the points.

There were two very brief Full Course Yellow periods just before the fifteen minutes mark as Maximilian Guenther and then Sam Bird left front wing parts lying on the track.

Twenty minutes in Nyck de Vries, who had been sitting fourth, slowed and stopped on track. The Dutchman quickly hopped out and pushed his car off the track towards a safe area before another Full Course Yellow was called and the marshals were able to assist him.

Unfortunately for de Vries, his actions were not looked upon favourably by the stewards who issued him a €5,000 fine for getting out of the car without permission and a 5 place grid drop for causing a dangerous situation by being out and pushing on a live track.

Lucas di Grassi found his Berlin form  again after yesterday’s, abnormal for him here, non-podium finish. Starting sixth he had made his way up to third and was right on Buemi’s tail during the de Vries incident.

The Brazilian got a short taste of second when Buemi went off line to activate his attack mode, before the place was resumed by the Nissan.

Di Grassi then had to spend his time fending off Robin Frijns and Stoffel Vandoorne, but was ultimately successful.

The fourth place for Frijns comes as only his second points scored this season after he took fifth back in the opening round.

Vandoorne did come under pressure from Sam Bird near the end but retained the fifth position that he had gained through an impressive double overtake on Bird and Rowland earlier.

While not as good a result as his podium in the first race, Bird’s sixth puts him well in the mix for a top three position in the championship.

Seventh was Oliver Rowland for Nissan e.dams ahead of the only finishing Venturi of Eduardo Mortara as Felipe Massa ran out of energy on the final lap.

Rounding out the points were Andre Lotterer and Jean-Eric Vergne, the reigning champion has not been having as smooth a time of it in Berlin as his teammate.

Da Costa’s initial closest championship rival, Mitch Evans, again failed to score and so falls to fourth in the running as di Grassi and Vandoorne jump him by one point, while da Costa is almost 70 points ahead of all of them.

It was another disastrous day for the BMW i Andretti title challenge, though still second in the teams’ championship they now trail by 65 points rather than 8, while their drivers have fallen from third and fourth to seventh and ninth in their title fight.