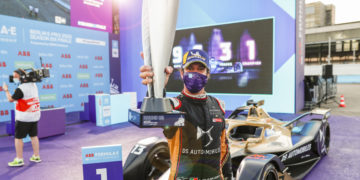 Da Costa dominant in Berlin as he extends his championship lead

Da Costa dominant in Berlin as he extends his championship lead 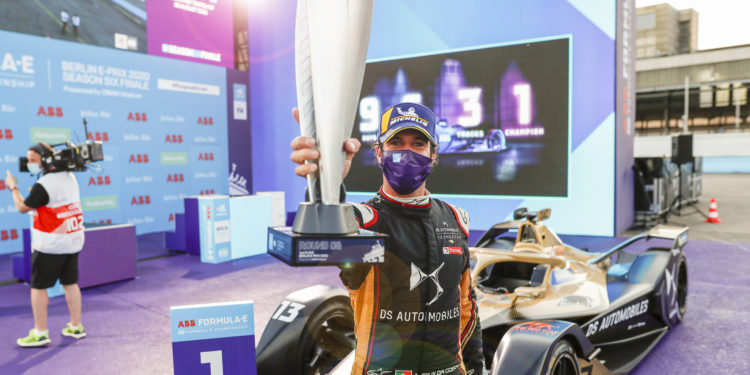 Antonio Felix da Costa takes the clean sweep of points in a dominant showing for DS Techeetah at the first of the Berlin E-Prix finale races.

After a five month break the drivers played it safe at the start and got through the first corner lap without incident. The top five held position but Jerome d’Ambrosio initially lost out to Sam Bird but managed to retake it before the lap was out.

The Techeetahs then proceeded to pull ahead of the field until the first big action of the day when Robin Frijns ended up hitting the wall breaking both his front wing and suspension. The Dutchman couldn’t quite make it back to the pits which brought out the safety car and nullified the ten plus second gap that the leaders had.

Five laps later we were back racing and Bird was the first to see an overtaking chance, passing d’Ambrosio for sixth before taking advantage of Sebastien Buemi’s failed Attack Mode activation to move to 5th.

Most of the action for the next few laps revolved around Attack Mode activations and failed activations with drivers shifting places accordingly. With half an hour gone, Felipe Massa’s whole race was run when his Venturi locked up and speared straight into the wall. A full course yellow was called while the Brazilian was assisted in reversing the car out of harm’s way.

Just before the Full Course Yellow, Vergne had briefly lost and regained position from Lotterer as he took his Attack Mode, but the return to racing saw him now 8 seconds behind his teammate and in danger from the Porsche and Virgin behind.

At the front da Costa took his final Attack Mode and ended wheel to wheel with Vergne but just managed to avoid both his teammate, the wall and stay in front. Then it all kicked off behind the leader

Lotterer meanwhile lost his spot to Bird and de Vries with his activation again with DEV making some late moves to keep his position. While this was going on Bird took a run at the reigning champion to go up to second and leave the Frenchman to deal with the charging pack.

It all kicked off then with Lotterer taking the place from Bird while Vergne, who was dealing with less usable energy available than the rest of the field, was getting swamped and falling back down to seventh.

With one minute and a lap left Evans had been having a go at Vergne but after some wheel banging he fell slightly back and got tagged by Guenther which sent the Kiwi into an impressive 360 degree spin before rejoining well out of the points in 18th.

The penultimate lap saw d’Ambrosio snatch fifth from Vandoorne while Lotterer snuck past a Bird, who was low on energy, into second. With half a lap to go most cars were well into the final percentage of energy and it looked like da Costa could be in danger of running out. The Portugese driver survived and made it to the line to take a clean sweep of points – group qualifying, pole, fastest lap and victory.

Lotterer and Bird both held positions to join da Costa on the podium for Porsche and Virgin while de Vries’ Mercedes was right on their tail to take fourth. Mercedes were one of only two teams to get both their drivers in the points with Vandoorne ending sixth, just behind d’Ambrosio’s Mahindra.

Nissan e.dams finished seventh with Buemi while BMW i Andretti were initially the other double point finishers with Guenther and Sims in eighth and tenth respectively before Geunther got disqualified for using more than the allowed energy and Sims moved to ninth.

That meant that Lucas di Grassi and Rene Rast both finished in the points, eighth and tenth, for Audi Sport Abt Schaeffler’s home race, marking the first time di Grassi had taken the flag not in a podium position. The Brazilian made a good recovery after qualifying 21st but had an eventful final lap tagging Vergne and causing the Techeetah to spin out of the points.

Vergne then decided to end his race in the pits rather than take the chequered flag, he had apparently been annoyed earlier in the race that his teammate was going too fast and over consuming.

Da Costa’s closest championship rival, Mitch Evans, ended the day outside the points which means da Costa now has a lead of more than a race win at 41 points.