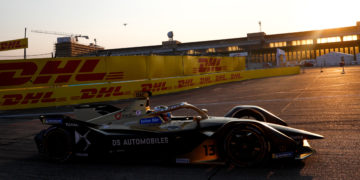 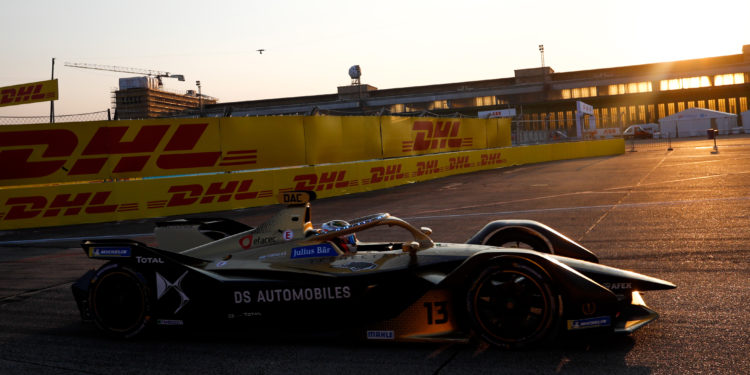 Antonio Felix da Costa topped the times in free practice as he aims to secure his first championship in today’s fourth Berlin E-Prix.

Da Costa’s first attempt at a quick lap was stymied when he locked after setting a fastest first sector. However, with only a few minutes of the session to go the DS Techeetah driver was back where he has been for most of the time in Berlin, at the top of the timing screens, with a 1:06.319.

Yesterday’s race winner, Maximilian Guenther, finished second less than four hundredths off da Costa’s pace. The two Nissan e.dams cars were in the top five with Oliver Rowland’s 1:06.450 in third and Sebastien Buemi less than a tenth behind in fifth.

Stoffel Vandoorne was the quicker of the two Mercedes-Benz EQ drivers, he slotted into fourth while his teammate, Nyck de Vries, despite setting the fastest times in the first two sectors could only manage sixth.

After picking up his first points since the season resumed yesterday, Mitch Evans’ effort was good enough for seventh fastest in his Panasonic Jaguar Racing machine. While yesterday’s pole sitter and podium finisher, Jean-Eric Vergne, who spent part of the early stages of the session in the pits with the cover off the back of the car, was three tenths off his teammate in eighth.

Sam Bird was ninth for Envision Virgin Racing with Lucas di Grassi tenth in his Audi Sport Abt Schaeffler. There were no incidents during the practice but Nico Mueller’s Geox Dragon did stop on track after the session had ended.