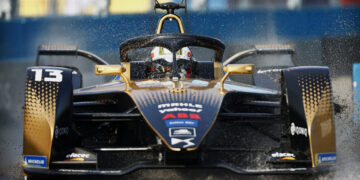 Da Costa leads the times in the day’s only practice

Da Costa leads the times in the day’s only practice 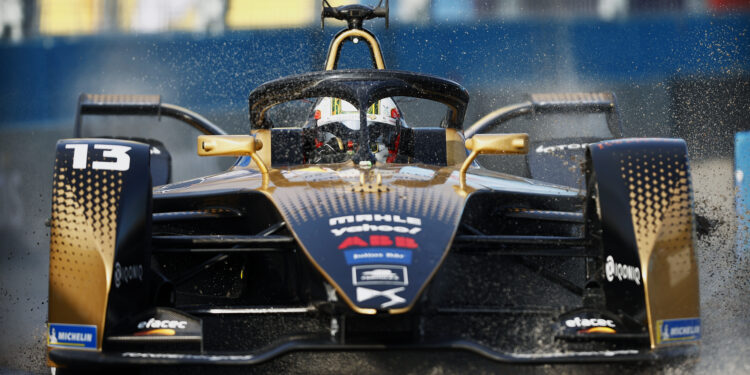 New York City E-Prix 2 – Antonio Felix da Costa had the pace in the final practice of the New York weekend finishing just ahead of Evans and the Virgins.

It was an incident free session on a once more drying and and dusty track, with all slides keeping just out of the wall and no kerb jumping causing any issues. Da Costa, after quite a quiet race yesterday, led the times with a 1:08.472 just half a hundredth ahead of the Jaguar of Mitch Evans.

Yesterday’s polesitter and leader for the majority of the E-Prix, unfortunately for him though just not the bit that counted, Nick Cassidy was a further fraction back 0.087 off of the Techeetah’s time. Joint championship points leader, Robin Frijns, was fourth in the second Envision Virgin car, just under a tenth off the pace.

Rene Rast made it three Audi-powered cars in a row and was the fastest of the Audi Sport Abt Schaeffler factory team in fifth with a 1:08.597. Norman Nato slotted into sixth for Rokit Venturi Racing, 0.158 off top spot.

Seventh was Pascal Wehrlein, he ended his race early yesterday after colliding with the back of Alex Lynn’s Mahindra as the Tag Heuer Porsche driver was attempting to head to the Attack Mode activation zone. Said Mahindra ended today’s sole practice session eighth, Lynn being 0.199 seconds off da Costa’s time.

The second Audi, of Lucas di Grassi, was ninth just over two and a half tenths off the pace while Edoardo Mortara rounded out the top ten making the Venturis the only Mercedes-powered cars there. Despite an issue with his car preventing him from putting in a full powered lap in yesterday’s qualifying, leaving him starting from the back and failing to take any points, the Swiss driver still sits at the top of the championship table equal on points now with Frijns but at the top currently thanks to having taken a win.