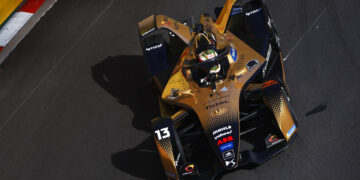 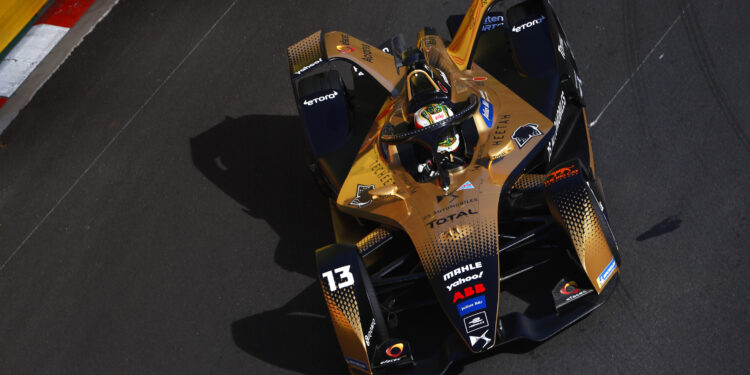 Monaco E-Prix – Antonio Felix da Costa was quickest in a close fought pole shootout to see DS Techeetah on pole for the second Monaco in a row.


Da Costa’s 1:31.317 saw him hold off the final three drivers in a very close fought Super Pole session. The reigning champion hasn’t had as good a start to his title defense as he would have hoped for so far and as such said he was being cautious and only gave it 99% on his lap. Coming in just 0.012 behind da Costa was Envision Virgin Racing’s Robin Frijns, who had been fastest in the group stages.

All the qualifying and super pole times can be found here.

Third was Mitch Evans who put in an action packed Super Pole lap but as the Jaguars had been fastest in practice, the Kiwi was disappointed to be 0.051 off the top time. Jean-Eric Vergne fourth in the second Techeetah, again with a very competitive time just 0.008 behind the Jaguar.

Fifth will be Maximilian Guenther, the BMW i Andretti driver putting in a good time, but just not able to keep up with the pace of the top four today. Oliver Rowland will start sixth, the Nissan e.dams driver once again not starting Monaco where he qualified, the Brit qualified on pole in 2019 but had a grid penalty, today he had the fastest third sector in the pole shootout but would’ve only been fifth before that time was cancelled by the stewards.

Seventh was Nick Cassidy, the Virgin driver just missing out on Super Pole with a lap time only 0.003 seconds off Rowland who was sixth in group qualifying. Pascal Wehrlein was the best of the Tag Heuer Porsches with a 1:31.900.

Alex Lynn, fresh from his first Formula E podium at the last race in Valencia, qualified ninth for Mahindra while Norman Nato put his Rokit Venturi into tenth but does have a two place grid penalty for hitting into a stationary Sergio Sette Camara under double yellow flags when the Dragon stopped just after Rascasse in FP1.

Sette Camara also had an eventful qualifying too as he spun at Anthony Noghes on his fast lap causing the session to be red flagged. Sebastien Buemi and Tom Blomqvist, who were behind, were allowed to complete their laps when the Dragon made it back to the pitlane. However, that meant the session ran over time and Super Pole was then started almost immediately afterwards which saw Nissan fall short by a few seconds of getting Rowland back into his car and out of the pit lane before the red light indicated they were out of time.

Championship leader Nyck de Vries did not have a good day, having to complete half his qualifying lap at 200kW after he accidentally hit the switch while going around the hairpin, his first sector set at 250kW had been very competitive but the Mercedes driver will be starting 23rd as a result of the error.