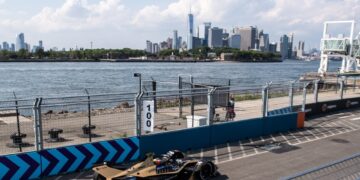 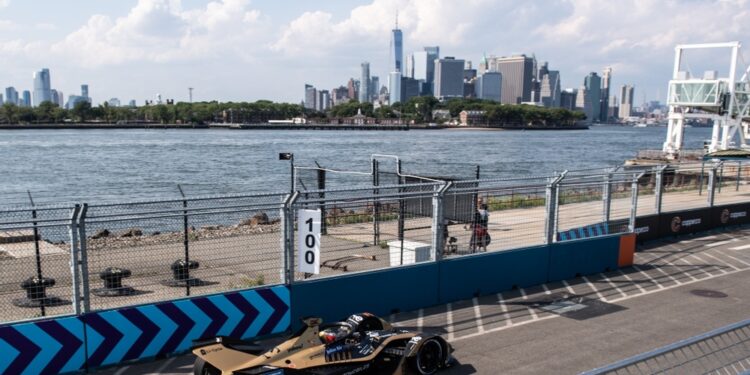 New York City E-Prix 2 – Antonio Felix da Costa held off Stoffel Vandoorne to take his first victory of the season with a lights to flag win.

With Nick Cassidy, who had once again come out on top in the duels, being handed a 30 place grid penalty for changing his battery after the crash yesterday, Antonio Felix da Costa lined up on pole position for the second of the 2022 New York E-Prixs.

The DS Techeetah racer had the bright red Mahindra of Alexander Sims alongside him on the front row and the two held station as the lights went out, while Andre Lotterer in P3 had an awful start with his Tag Heuer Porsche looking like it might have slightly jumpstarted and then stopped to reset as the others got away, that saw him fall to P11.

At the lower end of the top ten it was mixed fortunes for the Avalanche Andretti drivers, Oliver Askew started in P8 but dropped back to P10 while Jake Dennis had the much better start and jumped from P9 to P6. The two Mercedes-EQ cars however were both moving up with Stoffel Vandoorne and Nyck de Vries into P3 and P4 within the first five minutes after lining up in P5 and P7.

The biggest winner in the opening few laps however was NIO 333’s Dan Ticktum who made his way from P17 to just outside the points in P11. Ten minutes in and the young Brit was the first to activate his one eight minute long Attack Mode of the day.

The first of those in the top ten to go to the activation zone were de Vries and Sergio Sette Camara, who were line astern in P4 and P5. While the reigning champion held his spot, the Dragon/Penske driver lost out to Mitch Evans.

Just before fifteen minutes had passed the top two went into Attack Mode and that saw Vandoorne into the lead for a lap before he activated his own and slotted back into P3. With the top nine all in Attack Mode there was not much advantage to the power boost but a little mistake for de Vries gave Mitch Evans the chance he needed to move into P4 and split the two Mercedes.

The final driver in the top ten to take Attack Mode was Sam Bird in P10, the Jaguar driver holding off on his activation until the majority of those ahead were on almost at the end of their own sole activation.

While Bird and Frijns ahead, who also held off on activation for longer than most but still a few minutes before the Jaguar driver, were making their way up from the lower points places, at the front Sims had managed to hold off Vandoorne’s attempts until a surprise lunge from the Mercedes racer took the place from the Mahindra with just over nineteen minutes left to go.

With that move done it was the other Mercedes looking racy with de Vries bumping down the inside of Evans at the hairpin, also nudging the back of Sims as he did, to take P4. Then when Evans tried to take the place back, de Vries closed the door and the Jaguar hit a bump next to the wall, which knocked him sideways and saw his Jaguar sliding across the track but Evans was able to hold it and continue in P5, though he did lose a bit of time.

WHAT. A. SAVE. 😮‍💨@mitchevans_ catches a bump and almost spins!

With less than ten minutes to go de Vries went to make a move for the final podium position he hit the bump that Evans did a few laps earlier and went sliding across the track just as the Jaguar did. That saw Evans able to get through to P4 and a few minutes later as de Vries was defending from Bird, he went over the bump once again allowing the second Jaguar through.

With just over four minutes left Sims was under attack once again as Evans had moved up behind him while ahead of them Vandoorne was all over da Costa’s rear too.

In the final minute there was a brief traffic jam at the hairpin with Lucas di Grassi sitting nose first at the apex and attempting to reverse himself out, causing some havoc as he did. He and Jean-Eric Vergne had touched while fighting over P10, spinning Venturi and scattering some body work around the area.

While di Grassi was able to right himself and continue, at the exit of that corner Askew had come to a halt on the racing line, a spot where he remained for the end of the race while Race Director Scott Elkins continuously reminded the drivers to beware at that corner.

Those incidents saw yellow flags remain and cut down some of the opportunities Vandoorne could have tried to make a move on da Costa for the win, but in the end it was the Techeetah racer who took the chequered flag first.

Evans took the final podium place with a delighted Sims coming home in P4 for Mahindra’s best result of the year, which will almost double their season’s points haul so far.

Right behind him, P5 saw another great drive with a combination of Bird’s overtaking skills and alternate Attack Mode strategy seeing the Jaguar racer move up from P16 for another strong double points results for the team.

Frjins came home in P6 for Envision while de Vries never recovered from his pair of hits on the bump and brought the second Mercedes to the line in P7. After his strong start to the race Dennis took another points finish for Andretti in P8 while Lotterer wasn’t able to make up his slow start and ended in P9.

After a brake-by-wire issue in qualifying saw him fail to set a time and have to start in P21, championship  Edoardo Mortara did his best to recover and took the final point as well as the point for fastest lap.