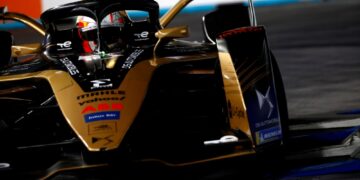 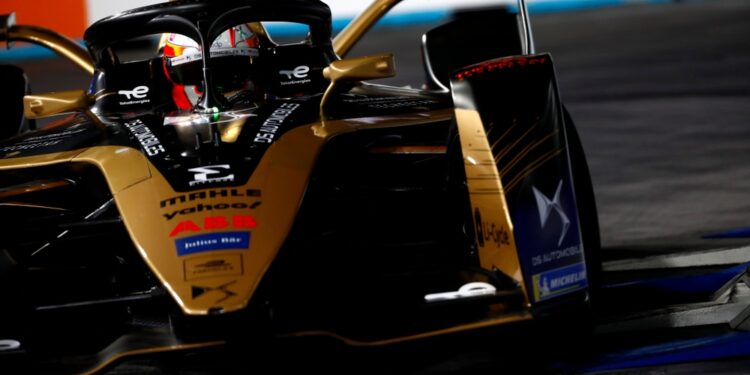 Lucas di Grassi was the first to take to the track for his 100th Formula E qualifying session but it was Sergio Sette Camara who put the first time on the board, a 1:23.449, but it was Stoffel Vandoorne who end at the top after the opening efforts after setting a 1:22.165.

When the track went quiet before the final runs it was Vandoorne along with Edoardo Mortara, Nick Cassidy and Nyck de Vries who were provisionally in the duel spots. Cassidy had whacked the wall coming out of the stadium section but luckily for him the car seemed to be undamaged despite that.

Sergio Sette Camara had his first two lap times deleted due to overuse of power but he was first to take to the track at the end of the session with Norman Nato lining up as the last to take the flag.

Alexander Sims didn’t head out again as he will have a 60 place penalty in the race after changing the MGU, gearbox and inverter on his car. That means he will start at the back and also have to serve a 10 second stop and go penalty in the race as he won’t be able to drop all 60 positions.

Mortara’s 1:21.770 saw him end the first group in P1 while Vandoorne will once again head to the duels while Robin Frijns and Lucas di Grassi will also take part in the head-to-heads.

First out in the second group was Andretti’s Oliver Askew and he opened the bidding for P1 with a 1:22.411. With all drivers having a time on the board it was Askew’s teammate Jake Dennis leading the way, the only one into the 1:21s at that point, with a 1:21.712.

Halfway through the session and Dennis, along with Pascal Wehrlein, and the two Techeetahs were in the top four places while Mitch Evans, Vandoorne’s title rival, was P6 on his opening effort and reporting back that he was struggling with the rear tyres.

Wehrlein took to the track first for the final runs, Evans meanwhile hit the wall on his run, knocking his steering out of balance, which saw him one of the slowest through sector 1 and while he did make it to P2, those behind were quicker and he was shuffled back to P7 giving a big advantage to Vandoorne.

Dennis ended P1 with a 1:21.673 with the two Techeetahs of Antonio Felix da Costa and Jean-Eric Vergne within a tenth of him in P2 and P3 while NIO 333’s Dan Ticktum took the final duel spot.

THIS could be a deciding moment in the championship!@mitchevans_ misses out on the Duels as @JaguarRacing switches focus to the race, our season finale where the World Champion will be decided!

There was very little between Ticktum and Mortara at the start of the lap with just over a tenth separating the two in sector one. The Venturi however extended that in sector two and despite the NIO 333 racer closing in slightly at the end, he would not go any further in his first duel appearance.

There was a big mistake for Vergne, locking up at turn 1, Vandoorne not having the smoothest of first corners himself but still had over a seconds worth of an advantage thanks to the Techeetah’s error. Vandoorne, unsurprisingly, was the one to progress.

There was only 0.011 in it over the opening sector but da Costa closed and then moved ahead from there to see one of the Techeetahs continue on to the semi finals, even still, Frijns’ lap time was faster than the winning laps from both previous quarters.

There was the slightest of advantages for di Grassi through the first few corners but Dennis found his pace after that and put in the faster first and second sectors but hit a bump near the end which would not have been a comfortable experience but that didn’t stop him from beating di Grassi.

SF1 The battle of the Mercedes powered cars, the two teams at the top of the Teams’ championship, and there was barely anything in it at the start, half a tenth separating the two after sector 1 with the advantage to the Venturi racer. That advantage continued through the rest of the lap with Mortara putting in the fastest time seen so far, a 1:20.913.

SF2 There was once again barley half a tenth in it between the two at the start but it was da Costa going for gold and taking it, the faster of the two in each sector but not by much with only 0.125 seconds in it at the end.

There were only 0.012 seconds difference between the semi-final laps from the two drivers, and it all started just as close as it could be with just 0.004 seconds between the two in the opening sector. Da Costa was able to pull a little bit more out in the second sector but a slight mistake from Mortara ensured that it was going to be the gold car on pole.

Dennis will line up in P3 with Vandoorne P4, well ahead of his championship rival Evans who will start well back in P13. Frijns was the fastest of the quarter-final losers so he will be in P5 with di Grassi alongside.

Row four will have Ticktum and Vergne while Guenther takes P9 ahead of Sette Camara thanks to the Nissan racer being the first not to progress from the same group as da Costa started the day in.