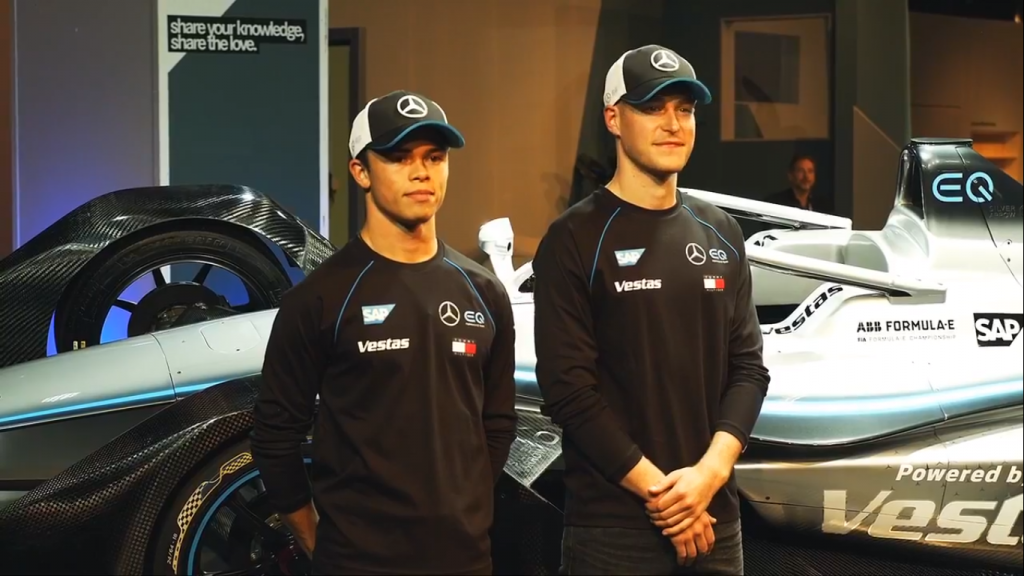 Mercedes-Benz EQ Formula E Team revealed the driver line-up and livery for their debut season this afternoon at the International Motor Show (IAA) in Frankfurt.


Nyck De Vries, who is currently leading the Formula 2 Championship for ART Grand Prix team, was part of the McLaren Young Driver Programme for nine years and for the past couple of years has been with the Audi Sport Racing Academy. The Dutchman tested for Mercedes EQ in August but is quite familiar with Formula E having tested for NIO last year and also driven for Audi Sport Abt Schaeffler and Envision Virgin Racing at the 2018 and 2019 rookie tests in Marrakesh.

Driving alongside de Vries at the team will be Stoffel Vandoorne. Vandoorne drove his rookie season for HWA Racelab, securing both a pole position in Hong-Kong and a best result of 3rd in Rome, and will continue with the team as they become the works Mercedes team while HWA AG will remain responsible for the cars at races.

“In Stoffel and Nyck, we have recruited two formidable and adaptable drivers who can continue to learn and grow with us in our debut season in Formula E,” says Ian James, Team Principal of the Mercedes-Benz EQ Formula E Team. “At Mercedes-Benz, we can look back on 125 years in motor racing. However, we know that Formula E is very different from any other series we have ever competed in. We are doing everything we can to achieve success, but we know that we have a steep learning curve ahead of us.”

“I’m absolutely delighted to be joining Mercedes,” said Stoffel Vandoorne. “I’ve already gained experience of the series racing for HWA last year. I am very pleased to have now become an official member of the Mercedes family. The arrival of Mercedes on the scene is a great opportunity for all of us. The car looks fantastic. I am looking forward to seeing what we can achieve as a team. The potential is huge, and I simply can’t wait to get started.”

While his new teammate, de Vries, remarked that “Formula E is a great platform that has already established itself as one of the biggest and most professional racing series outside Formula 1. It’s a great opportunity, for which I’m really grateful to Mercedes. I’ve had an excellent reception from the team, and it’s great fun to work with them. But ultimately, it will all depend on the performance on the race track once the season starts.”

“I’m looking forward to driving for the same team as Stoffel. He has a lot of experience and is a great driver. Consequently, I’m hoping to learn a lot from him so that, together, we can get the best possible result for the team.”

The drivers then drew the covers back from the Mercedes-Benz Silver Arrow 01 to reveal a silver and black car with electric blue highlights.